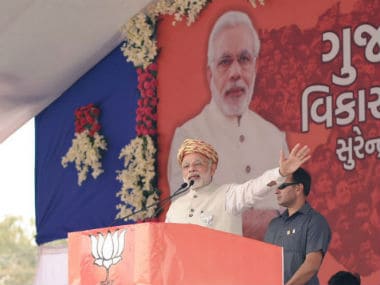 After addressing rallies in Bharuch, Surendranagar and Rajkot on Sunday, as part of his two day-long 'Vikas Rallies', Prime Minister Narendra Modi will be addressing four more rallies on Monday. The prime minister will be holding public meetings at Dharampur in Valsad district and later at Bhavnagar. From there he will visit other places in Saurashtra: Junagadh and Jamnagar.

Modi on Sunday accused the Congress of seeking to divide the people on caste and religious lines. He also hit out at the Congress over the upcoming election of its president, alleging that the Opposition party has a history of rigging (organisational) elections.

If one doesn't have democracy in his home (party), how can the person practice it in the country, he wondered and said the outcome of the election to the top post in the Congress is a foregone conclusion.

He lashed out at the Congress over its criticism of the government's ambitious bullet train project, saying if the opposition party has a problem with it, it could roam around on bullock carts.

"The people of Gujarat know what the Congress is up to. It changes colour time and again, creates a wall between brothers, it wants to make urban areas fight with rural areas of the country, illiterate fight with literates and poor fight with the rich," he said.

Modi said the party made "one caste fight with the other, one religion fight with another".

"They keep you busy in fighting with each other. You may die but the Congress will eat 'malai' (cream)," he said, launching a broadside against the opposition party apparently for having an alliance with caste leaders such as Hardik Patel, Jignesh Mevani and Alpesh Thakor ahead of the state polls. "But, they do not understand that all these diseases were cured in Gujarat from the day when the BJP came to power in the state, and the state is firmly on the path of development," the prime minister asserted.

"They (Congress) have a pain that Gujarat is progressing rapidly. When I was the chief minister, no day passed when they had not taken a step to harm Gujarat," he said.

Sharpening his attack on Congress leaders such as former prime minister Manmohan Singh and former finance minister P Chidambaram, he told a rally in Bharuch district that by opposing the bullet train, the party stooped to a such a level that it was opposing the country's development.

Recently, Manmohan Singh and Chidambaram, during their visits to Gujarat, had said the bullet train project was among the NDA government's "misplaced priorities".

Resuming his campaign in his home state, where the first phase of Assembly elections is to be held on December 9, said, "Dr Manmohan Singhji, your government had made an announcement before 2012 (Gujarat Assembly) elections from Delhi about the bullet train, but your talks with Japan did not go down well as the loan Japan was offering we could not afford," he said.

But, Modi said, his government negotiated the loan at a very low interest rate and the work on the bullet train has started.

The prime minister said, "My problem is, you can oppose the BJP but why stoop to such a low level that you are opposing development of the country."

He said the real thing is they are in pain as they could not do it.

"We say, there is no other way than development. We have wasted 70 years in the fight over of casteism, in dynastic politics, in yours and mine, but now the country is determined to go on the path of development," he said.

Later, at a rally in Surendranagar district, he hit out at the Congress over the upcoming election of its president.

"An election is going on in the Congress party for its president. What the result will be everybody knows," he said.

To this, the crowd replied that Rahul Gandhi will become the Congress president.

Modi said a youth called Shezad (Poonawala), who is a (Congress) party worker, has raised questions over the process of the election and alleged that it is being rigged.

"We have a Gujarati saying which means that if there is water in a well then only it can come in a bucket. If you do not have democracy in your home (party) how can you practice it in the country," Modi said.

He went on to allege that this has been a practice with the Congress party.

"Sardar Patel got more votes than Jawharlal Nehru when the Congress party had (then) met to decide who will be the prime minster of the country. But that the election was rigged and Nehru won," he alleged.

Claiming the same thing happened with Morarji Desai, he said, "They have the history of rigging elections."

Earlier in Bharuch, Modi said his government has recently taken steps to delist bamboo from the tree category and classified it as a grass so that the tribal people can grow it and sell it in forest areas.

Rahul Gandhi's meme on potato has been doing rounds in social media in which he is seen saying that the BJP will invent a machine in which if 'aloo' (potato) is put from one side, then gold will come out from the other side.