From Pulwama attack to air strikes: A timeline of events that escalated tension between India and Pakistan

Pakistan on Thursday announced that it will release Wing Commander Abhinandan, who was arrested by the Pakistan Army on Wednesday after his MiG 21 Bison crashed inside Pakistan-occupied Kashmir while chasing away Pakistani F-16 jets. While announcing the decision, Pakistan prime minister Imran Khan also urged his Indian counterpart Narendra Modi for a dialogue to resolve issues between the neighbouring countries. 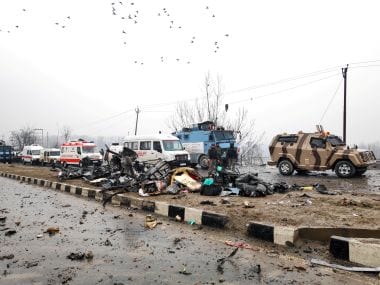 From a situation when tensions escalated between India and Pakistan after a terror attack killed 40 jawans in Pulwama, Jammu and Kashmir, to Pakistan making a gesture for peace with the release of Wing Commander Abhinandan, let's take a look at the incidents that led to a flare-up of tensions between the two neighbouring countries:

- Forty Central Reserve Police Force (CRPF) personnel in Jammu and Kashmir were killed when the two buses they were travelling in became the target of a suicide bombing. The buses were part of a larger convoy of paramilitary vehicles travelling along the highway in south Kashmir's Pulwama district. This was the first suicide bombing to have been carried out in the past decade.

- Shortly after the attack, JeM released a video claiming responsibility for the attack. In the video, the suicide bomber identified himself as a local Kashmiri jihadist Adil Ahmad Dar, a resident of Gundibagh, Kakapora in south Kashmir’s Pulwama district.

15 February 2019
- MEA accused Pakistan of supporting terrorism in a press statement. It said Pakistan has given full freedom to Masood Azhar, leader of JeM, to operate and expand his terror infrastructure in territories under Pakistan's control and to carry out attacks in India and elsewhere with impunity.

- Pakistan refuted India's claims of its hand in Pulwama attack. China maintained it stance that Masood Azhar was not a terrorist.

- Warning Pakistan that it cannot weaken India by orchestrating such attacks, Narendra Modi said those responsible will pay "a very heavy price" and security forces will be given a free hand to deal with terrorists.

- Curfew was imposed in Jammu as a precautionary measure after protests over Pulwama terror attack. Army was roped in to maintain order.

- India launched a diplomatic offensive against Pakistan, briefed envoys of 25 countries on Pulwama attack by JeM.

- Jammu and Kashmir Police detained seven from Pulwama in connection with deadly terror attack by JeM.

- MEA hit out at Pakistan for denying its role in the Pulwama terror attack, said that the truth is 'for all to see'.

- US NSA John Bolton told his Indian counterpart that the US supported India's right to self-defence after the Pulwama terror attack.

- A Kashmiri student was booked in Dehradun for sending messages supporting Pulwama attack. Reports emerged of Kashmiris being harassed and attacked.

- All-party meeting was held in New Delhi. Parties unanimously passed a resolution to stand with the security forces.

- India raised customs duty on all Pakistani goods to 200 percent.

- Pakistan foreign minister said Islamabad was ready to cooperate if India shares evidence. "If India has any evidence (about involvement of elements in Pakistan in the Pulwama attack), it should share with us. We will investigate with full honesty and see if it was right. And I say with full confidence that we will cooperate. Because we do not want disturbance," he said.

- Home ministry asked all states to ensure security of Kashmiri students amid reports of threats.

- Omar Abdullah questioned the attack on Kashmiri students on Twitter. "Those hotheads that make up the mobs doing this damage need to ask themselves (if they have the mental bandwidth) whose purpose is served by ostracising Kashmiris," he said in a series of tweets.

- Federation Of Western India Cine Employees (FWICE) called for a complete ban on all artistes from Pakistan.

- Four Kashmiri students were charged with sedition in Jaipur over picture of them 'celebrating' Pulwama attack. A Kashmiri man was beaten up in Delhi.

-Lieutenant General Kanwal Jeet Singh Dhillon, who is General Officer Commanding (GOC) of the Srinagar-based 15 Corps, gave out a stern warning against men taking up arms in the Valley, said, "Anyone who picks up gun in Valley will be killed."

- In his first response after the Pulwama attack, Pakistan prime minister Imran Khan said his country will not think twice before retaliating in the face of any military action by India.

- Pakistan foreign minister Shah Mehmood Qureshi wrote to the UN, spoke of deteriorating security situation resulting from threat of use of force against Pakistan by India.

- Donald Trump described Pulwama attack as "horrible situation", said it would be wonderful if India, Pakistan got along.

- Imran Khan authorised Paksitan military to "respond decisively and comprehensively to any aggression or misadventure" by India.

- UNSC released statement condemning "heinous and cowardly" Pulwama attack, named Masood Azhar-led JeM responsible for the attack. China, however, said the statement was not a judgement on JeM.

- Amid calls to boycott Pakistan in the cricket world cup, BCCI wrote to ICC, highlighting concern over the security of the players. The BCCI said that it will consult government over whether or not India should play Pakistan in the cricket world cup. The BCCI also said it will communicate to the ICC that "in future, ICC members should not engage in ties with nations from where terrorism emanates". Calls to boycott in other games were also raised.

- "Don't mess with us," Pakistan military warned India. It said it can respond to full spectrum threat.

- JKLF chief Yaseen Malik, Jamaat-e-Islami leaders were detained amid speculations of wider crackdown on separatists in Jammu and Kashmir.

- Mehbooba Mufti criticised the crackdown on separatists in Jammu and Kashmir. She called the move 'arbitrary', questioned the legality of arrests.

- Modi warned people against targeting Kashmiris, speaking out for the first time since violence broke out over a week ago in many parts of the country after the Pulwama attack. "Our fight is for Kashmir, not against Kashmiris. Kashmiris have suffered the most due to terrorism, and the rest of the country must stand in their support," he said at a rally in Rajasthan.

- Trump said he can understand India's desire for "something very strong" after the Pulwama attack.

- "Give peace a chance," said Imran Khan in a message to Modi.

- In an interview with Pakistani newspaper Dawn, former Pakistan president Pervez Musharraf said Pakistan won't use nuclear weapons on India, claimed that "if we attack them with one, they will finish us with 20."

- 12 Mirage 2000 jets struck Pakistan. According to reports, 12 IAF jets took part in an operation to drop 1,000-kilogram bombs on Jaish-e-Mohammad camps across the Line of Control and in Pakistan. The operation reportedly led to the "complete destruction" of the JeM camp in Balakot sector of Pakistan.

- Australia said that Pakistan must act against terror groups.

- Pakistan Army violated ceasefire along the LoC in Nowshera, Akhnoor.

- In his first public address after IAF air strikes on terror camps in Pakistan, Modi said the country is in safe hands and nothing is above the nation.

- Pakistan claimed to have captured two IAF pilots. It later changed its statement to say that only one IAF pilot was in Pakistan's custody. Pakistan released video of captured IAF pilot Wing Commander Abhinandan.

- MEA confirmed that one IAF pilot was missing in action.

- Imran Khan defended F-16 jets entering Indian air space. He said that the "purpose was to demonstrate right to defend self", not cause casualties. In a televised address to Pakistani citizens, Khan defended the airstrike and urged Modi to sit together for talks and resolve issues through dialogue.

- Chiefs of three services held a press conference, presented proof of Pakistani F-16s being used against India on 27 February airstrike.