Google’s consumer game is on point, but its CEO Sundar Pichai also touched upon a host of socially relevant issues and how Google is trying to tackle them

The annual Google developers conference — Google I/O — started with some major announcements, including the release of the next version of Android. Clearly, artificial intelligence was the underlying leitmotif in all the major updates we saw being discussed last night. But while Google’s consumer game is on point, its CEO Sundar Pichai also touched upon a host of socially relevant issues and how Google is trying to tackle them. This was interspersed with a few poignant moments too, something that we are starting to increasingly witness at major technology keynotes.

The conference just reiterates the fact that technology can no longer be seen as this isolated island and how it has seamlessly become part of everyday life.

Before I get into AI, I’d just like y'all to see this video

This one demo shows how Google is leaps and bounds ahead of its competition when it comes to artificial intelligence chops. The seamless communication between Assistant and the human receptionist at the hotel shows how far Google has come when it comes to natural language processing, understanding context and taking care of a mundane tasks that would otherwise be a time sink for you. Even little nuances, like responding with 'Mmm-hmm' when listening to the person on the other end of the call, are very human traits that Assistant has mimicked perfectly. Let me put it this way, how can you be sure that Google didn't use a real person for that demo? That's exactly how natural Assistant sounded when making the call. 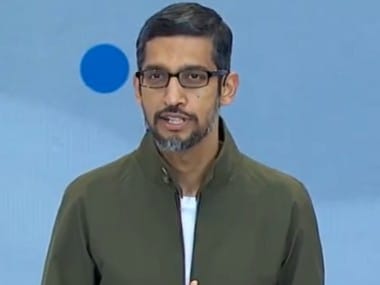 Yes, there are questions around possible misuse of this technology as well (faking news for starters, impersonating someone, etc.). When it evolves even further, two-three generations down the line, Assistant will have capabilities and enough intelligence to handle more complicated tasks over a phone — and Google will have to be ready with answers then. But for now, this shows how Google is at the bleeding edge of understanding natural language. The ‘Continued Conversations’ feature is another example of this, where you don’t need to use the trigger word — Hey Google — every time you want to talk to Google.

Artificial Intelligence and machine learning were seen on almost all the major announcements that were made yesterday, be it with Google Photos, Smart Compose for Gmail, Google Lens updates and of course, with Assistant which will now also be baked into Google Maps. The navigation on Google Maps using your camera is another example of optimal use of AI. Google Lens ably demonstrated the computer vision prowess of Google as well, where real-time object recognition was baked into Lens.

In fact, Google has renamed its research division to Google AI. It also announced Tensor Processing Unit 3.0 pod, which, according to Google, is 8x more powerful than the previous generation TPU pod and can offer up to 100 Petaflops of performance. Needless to say, Pichai will ensure that the ‘AI-first’ tag is carried forward in all Google products.

Using AI for personal as well as social good

If yesterday’s keynote was any indication, Google does not just want to use AI to benefits its end consumers, but is also wants to use it for social good. We saw how Google is using AI to help detect eye defects and how machine learning can derive more insight from the same retinal scans to predict future cardiovascular issues. Google's AI was looking at data that doctors already had access to, but it was interpreting and collating the data far better than any human ever could.

Another instance involved the Google team working with developer Tania Finlayson to bake Morse Code into Gboard. Why? Differently-abled users can benefit tremendously from an input that's as simple as Morse code, differently-abled people like Finlayson, who communicates via a specially-built communication device.

The Lookout App, which assists those with visual impairments by giving out audible cues about text, objects and people around them using the camera on your device, is another step in that direction.

It looks like AI for social good is slowly but surely becoming a constant theme at major technology keynotes. We even saw Microsoft announce a $25 million fund for research in ‘AI for Accessibility’. With Google’s proficiency in machine learning and AI, it will definitely be looking at solving more social issues using AI, and this space is just going to grow.

This is also in line with Google co-founder and Alphabet President Sergey Brin’s recent annual letter where he stressed on the need to use machine learning for the social good. “I expect machine learning technology to continue to evolve rapidly and for Alphabet to continue to be a leader — in both the technological and ethical evolution of the field,” said Brin in his annual Founders’ letter.

With Digital Wellbeing, Android wants you to use your phone less when you are among friends and family. And to that effect, Android has added features such as an enhanced 'do not disturb' mode, a 'wind-down' mode and so on. In addition to this, Google has also promised to train 5 million kids across the world to use their online time responsibly. As technology companies and their product life cycles mature, it is good to see them getting aware of the divisive and toxic habit cycle they create. Google’s decision to bake Digital Wellbeing into Android P is a good acknowledgement of the fact that you do not have to be tied down by your digital devices.

For Android enthusiasts, the best news was the announcement that Android P beta would not just be rolling out on Google Pixel devices, but to as many as six other brands’ phones, namely: Sony Xperia XZ2, Essential PH-1, Vivo X21, Nokia 7 Plus, Oppo R15 Pro and Xiaomi Mi MIX 2S. Even OnePlus 6, which is to be announced next week, will support the Android P beta on launch day. Samsung was conspicuously missing from this list though.

Android OS adoption has been the proverbial Achilles heel for Google. This chart shows that iOS 11 has an 82 percent share on all iOS devices out there, whereas Android Oreo is found on only 20 percent of Android devices. The fragmentation of Android comes with its share of advantages, but a major drawback has been Android OS adoption on non-Pixel devices. With Google announcing Android P beta support on six non-Google-branded phones, most of which come with their own custom skin, I feel it is definitely a step in the right direction. Android P beta is also coming to Nokia 7 Plus

There’s no point having new features on the operating system when 90 percent of your user base can’t access it unless they upgrade to a Pixel device. In addition to the Android One program, this move shows that Google’s willingness to work with its device partners to ensure that the latest Android OS is available to users. Although Google has only announced support for specific devices from these brands, it's support for more devices than ever before, and things can only improve. If anything, Google should be getting more aggressive with ensuring that OEM deliver updates faster.

“News is core to our mission. Also in times like this, it is more important than ever to support quality journalism. It’s foundational to how democracies work,” said Pichai, before getting in to discuss the changes made to the News app. He acknowledged the challenges facing the news industry, while announcing that Google has already invested $300 mn in the Google News Initiative.

Fake News has easily become a headache for most online platforms and more so for giants such as Facebook and Google. But unlike Facebook, where even though a lot of news is shared, it is to Google News that the majority of online users go for their news diet. Yes, Twitter does excel when it comes to news that is breaking. But for all practical purposes, if you are not subscribed to physical newspapers, the Google News homepage gives you a good idea of what is happening in your city, country and the world.

Keeping this in mind, and the need to furnish all aspects of a news story — to avoid the rise of echo-chambers and biased or fake news — Google decided to completely revamp its News app with some thoughtful additions. A feature called ‘Full Coverage’ for instance, gives you information about a breaking news story from multiple news sources and from multiple angles, and even goes to the extent of giving you a timeline if that news story has some past relevance. This should help in informing the readers beyond just a news headline, thereby helping readers consume news in a more nuanced manner. More importantly, Google was very clear that information so delivered would be identical to everyone. 'Full Coverage' will not be biased to your preferences.

It’s good to see Google taking this responsibility seriously, and in a way that does not hurt publishers.

Taking the best from other ecosystems and baking it into Google

A lot of the features that Google did announce on stage did make me go, ‘I’ve seen this feature on this app. I’ve seen that feature on some Android skin’ and so on. Thanks to the gazillion Android user interfaces and skins out there, we already see a lot of features on them long before Google bakes it natively into Android. For instance, at Google I/O 2018, the adaptive battery update that was shown off seems inspired by the adaptive charging feature that is seen on many Android devices. The app dashboard feature of Digital Wellbeing, which gives you a breakdown of your app usage time, is a feature that has been seen on many third-party apps available on Android and iOS. The new navigation gestures are clearly inspired from the Apple iPhone X’s gestures, where there is no interaction with a Home button whatsoever. A lot of Android phones also offer similar navigation techniques too. Google Maps has added a lot of social features, which helps you select restaurants easier — something that is a feature on any food recommendation app.

Google natively baking these features into newer Android flavours and adding some extra finesse is a sure-fire trend that we have been seeing over the last couple of I/O events.

And come to think of it, it’s not really a bad thing if it is adding value to your experience on Android.

The Google I/O 2018 day one keynote was definitely a success. It’s great to see AI being put to use not just for our personal benefit, but to also help society at large. Also, in a rare instance, a company as large as Google is releasing a product to keep users away from continually interacting with its services – in the form of Digital Wellbeing. There are third party apps to do that, and Google didn’t need to bother with it, but it’s great to see companies acknowledging the fact that they’ve created products that are taking a bit too much of our mind space, and a little bit of digital detox is the need of the hour.

AI improvements definitely raise some concern and skepticism as well. With AI getting powerful enough to handle phone conversations for you, where do we go from here? Last year, Google had released an AI camera called Clips which was called ‘creepy’ by a huge section of the media. This time around, Google has partnered with OEMs to release smart displays, some of which were also demoed at IO. Google also needs to be extremely proactive when it comes to pre-empting the ways in which its AI and AI-powered products can be misused.