Android P preview: A smarter, simpler, more mindful Android is coming soon to a device near you

The most anticipated update at Google I/O, Google’s annual developer conference, was Android P. Given that a billion+ users use Android-powered devices, this is to be expected, especially as Android P is the next major update to Google’s ubiquitous OS. The Android P Beta is now available on select devices

We still don’t know what the P stands for, but we do know a lot about the updates features.

The first example of Android P’s AI smarts comes from its battery features. P will learn how you use your phone and optimise battery life accordingly. It will predict the apps that you need and then prioritise power to apps accordingly, especially to background tasks.

If, for example, you don’t use mail on weekends, the amount of resources dedicated to that app will be reduced on weekends. Such steps have so far resulted in up to 30 percent gains in battery life, claims Google. App Actions
In line with Android P’s predictive nature, P will learn to anticipate the apps that you’ll need. It will help you “get to your next task more quickly”, says Google. Android P will make it easier to access apps when needed

Slices
Yet another app update is Slices. It’s a developer API that will let developers present users with a “slice” of an app that only gives the functionality that’s needed. You don’t need to run the entire Uber app to book a cab, for example. A “slice” of it will do. 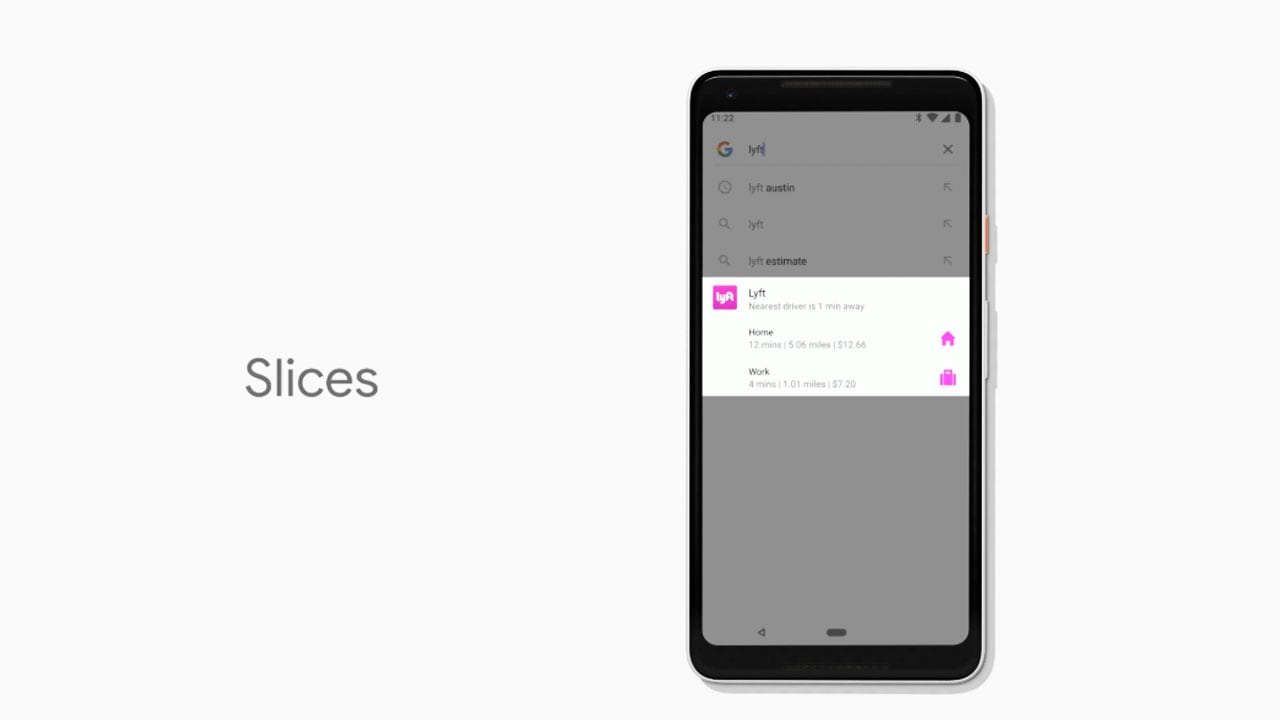 Why open a full app when you need just access a "slice" of it.

The next major feature of Android P is simply called “Simplicity.” The goal of designers was to make this generation of OS simpler to use. Actions would be more intuitive, and design would be more streamlined.

Home button
Since every Android device maker out there is aping Apple, Google has figured out a way to assist these device makers, and then take things a step further.

The Home Button looks a bit like Apple's home button, but it's far more useful.

The new Home button is now a small dash at the bottom of the screen. As with iOS, swiping up takes you to an ‘Overview’ screen. This screen shows your open apps, gives quick access to search as well as your most frequently used apps. Sliding up once again will open the Apps drawer.

Better yet, holding the home button and sliding it to the right or left will take you directly to the multi-tasking menu. This is far more intuitive than Apple’s swipe-up-partially-and-hold.

Also included is an update to Quick Settings and the screenshot tool.

Volume controls
Volume controls will now default to adjusting multimedia volume. Most of the time, we only press the volume button when we want to turn down the volume on music or a video. The new update will make it easier to do this.

Other updates include changes to notifications and navigation. Orientation controls can now be app-specific, a feature that we’re very excited about.

A completely unexpected announcement was the news that Android P would focus on the well being of its users. It’s a very nice touch that’s designed to help us reduce the amount of time we spend on our devices. Well Being is an Android P feature that we just didn't expect. Thank you, Google!

Dashboard
This is an overview of your interaction with the phone. Here, you can see how long you spent on the device and what you were doing in each app. It’ll even tell you how many times you’ve unlocked the phone.

The idea is that you monitor your activity and determine the apps that are taking up too much of your time. Basically, Google wants the time you spend on your phone to be more meaningful.

App Timer
A really cool feature in Android P is the App Timer. You can set time limits on your apps to limit their usage. The app will not be unusable when the timer runs out, but its icon will be greyed out to let you know that you shouldn’t be using it.

Do Not Disturb
The updated DND mode also disables visual notifications, not just calls and audible notifications. You can also simply turn your phone onto its screen to enable the mode.

Wind Down
This feature is very similar to Apple’s Night Mode on the iPhone. Rather than limiting exposure to blue light, however, Wind Down will turn your screen to grey scale when your chosen bedtime is near. This will be an instant visual reminder to you that it’s time to sleep.

Android P will be coming with all these and more.

The best part is that the Android P Beta is available today, and not just to Google’s Pixel devices. The Sony Xperia XZ2, Xiaomi Mi Mix 2S, Nokia 7 Plus, Oppo R15 Pro, Vivo X21, OnePlus 6 and Essential PH-1 will all support the beta from today.