Google IO 2018: Google Photos gets AI-powered Smart Actions feature to help you enhance your pictures with one tap

Google Photos will now let you adjust brightness, correct colors, add a pop to images, all with just a tap.

Artificial Intelligence-led new features were sort of the highlight of day one of Google I/O 2018. Among others, Google Photos received a new AI-powered feature, which will suggest some one-tap actions. 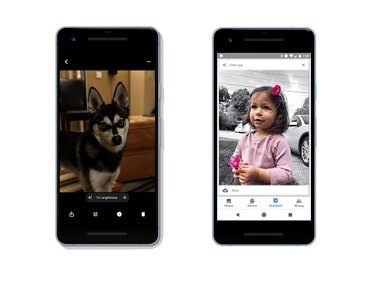 At the annual developers conference, Google CEO Sundar Pichai announced a new feature called Smart Actions for Google Photos, which is designed to make scanning documents, making tweaks to your photos and sending pictures to your friends much more efficient.

However, the highlight is the one-tap suggestion that comes with these Smart Actions. This means that going forward, Google Photo will automatically spot if a photo is too dark, or if its colours need to be adjusted. It will suggest you the changes, and with just a tap on the prompt, Google Photos will fix your image to just the right tones. Also announced, was the ability to change black-and-white shots into colour with just a tap. This is a really cool feature, especially if you have a lot of vintage black and white photographs with you.

Additionally, Google announced that starting now, you will see a new photo creation that plays with pops of colour. In these creations, Google uses AI to detect the subject of your photo and leave them in colour, while the background is set to black and white. You'll see these AI-powered creations in the Assistant tab of Google Photos.

But the feature that got the loudest cheers at the Google I/O was converting documents into PDF files automatically. This means, if you're taking photos of documents on Google Photos, it will be able to convert them from JPG to PDF with the help of AI.

Finally, to make Google Photos more compatible, Google also announced what it calls Google Photos partner program, which will give developers the tools to support Google Photos in their products so that people can choose to access their photos whenever they need them. The support for Google Photos in third-party apps should be out in the coming months.