Amit Trivedi on reuniting with Anurag Kashyap in Manmarziyaan: 'He sets me free from all my inhibitions'

In an industry obsessed with deifying the star, the spotlight often evades those who work tirelessly behind the scenes. The success of a film is often attributed to its face but seldom to those who constitute the spine. And so, in this column titled Beyond the Stars, Firstpost will interact with film technicians who bring their expertise to the table.

Amit Trivedi, who made his debut as a music composer in Raj Kumar Gupta's 2008 film Aamir, has completed 10 years in the business. While Aamir was no less of an album, Anurag Kashyap's Dev.D is what announced his arrival. Now, he has reunited with Kashyap once again after Bombay Velvet, for Manmarziyaan. The popularity of tracks like 'Dariya', 'Dhyanchand', 'F for Fyar', 'Gray Wala Shade' and 'Sachchi Mohabbat' have demonstrated yet again how integral a film's soundtrack is to its narrative. A month after Manmarziyaan, his music will also adorn Pradeep Sarkar's Helicopter Eela, starring Kajol. 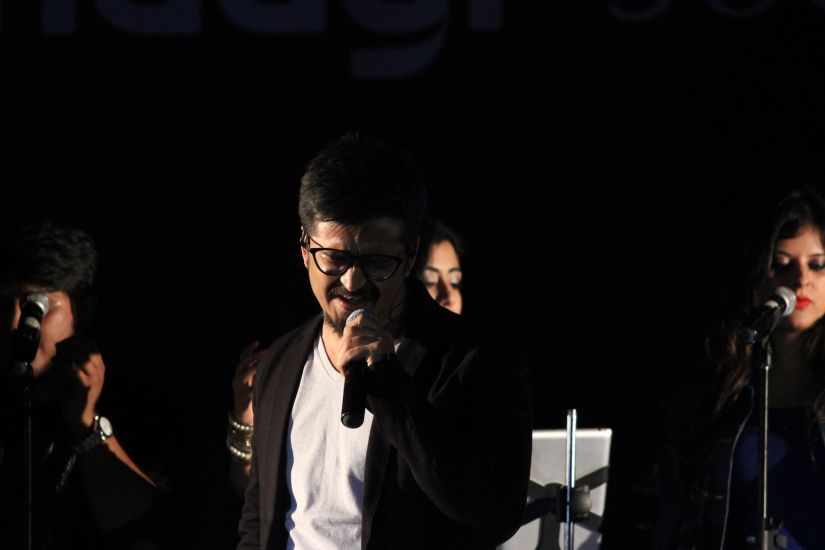 Here are excerpts from an interaction with the composer who proves at regular intervals how his compositions are way ahead of their time.

You have composed 14 songs for Manmarziyaan despite the fact that it is not even a musical, unlike your recent films Fanney Khan and Helicopter Eela. How integral is the music to this film?

Music is an integral part of this film. Yes, this is not a musical but the music has been used beautifully to take the story forward. To say more would be to give away the story of the film. So I’ll say please watch and decide for yourself.

The 14 songs are being given a good push with the #WakeUpToManmarziyaan campaign. How do you feel to have your music being played up by the makers?

It is an amazing feeling. I’m glad that a unique marketing campaign was designed specially for the songs of the film. Since the film has 14 songs, it did require special treatment or else the songs would’ve been unnoticed. By releasing one song every day, they have ensured that all songs get their day in the sun. For any composer, that’s the best compliment.

Your claim to fame unarguably was Dev.D. How was it reuniting with Anurag Kashyap after so many years? How much does he contribute to the process of composition?>

Anurag sir is very special to me. He sets me free from all inhibitions because he himself does not cater to any restrictions. He always pushes me to think out of the box. I feel completely fearless while composing for him. He is very instrumental in getting the music out of me. Vicky Kaushal and Taapsee Pannu in a still from Manmarziyan

What was the brief given to you for 'Mummy Ki Parchai', the first song of Helicopter Eela? How did you ensure that the idea behind the song comes through?

The song is basically from a son’s POV. The mother is a constant shadow in every aspect of his life. Be it his friends or social media. The brief was this and Swanand (Kirkire, lyricist) basically did a great job in capturing the thoughts of the son. He wrote the lyrics first and then I composed on it. Pradeep dada wanted a rock vibe to it. So I approached it that way.

How was it collaborating with Pradeep Sarkar for the first time?

It was amazing to work with him. He knew exactly what he wanted and guided us in the right direction. I just followed his vision through out the process.

Varun Grover had pointed out that Swanand Kirkire's name as the lyricist was not included in the credits of the film's trailer. How crucial of a role do you think lyricists play in the success of an album?

Well, emotions can be expressed accurately by lyrics. Music does convey feelings definitely, but lyrics and music together is a great combination. Lyricists play a very very vital role in making a song a success. Kajol in a still from Helicopter Eela

You reunited with Swanand after hits like Kai Po Che and English Vinglish. How different is his process from that of other lyricists? Does it help that he is also a playback singer?

Yes, it does. A singer who is a lyricist can sing the song while writing, and it becomes easy for the writer to write in rhyme and in Meyer. And working with Swanand is always a pleasure. He’s a fantastic lyricist and has a very unique way of writing.

Did you know, while composing, that your songs in Helicopter Eela and Fanney Khan would be picturised on Kajol and Aishwarya Rai Bachchan respectively? Does it add pressure to do justice to their stardom?

Well, I don’t approach any song with an actor in mind. Only the director's brief is on my mind. There is always pressure to deliver irrespective of the actors.

You mentioned during the trailer launch of The Remix that you do not like rehashes of old songs, as is the trend today. Then how did you add value to the recreation of Nusrat Fateh Ali Khan's ghazal 'Ye Jo Halka Halka Suroor Hai' in Fanney Khan?

Well, I never wanted to do the recreation. I only did it out of respect for Rakeysh Mehra sir. They wanted me to do another remix (which is now the 'Mohabbat' song) but I had to politely decline. Aishwarya Rai Bachchan in a still from Fanney Khan