Samsung finally took the wraps off its new Galaxy S10 family at the Galaxy Unpacked event on Wednesday. The three new Galaxy S10 models: the Galaxy S10, Galaxy S10 Plus and Galaxy S10E share similar software and processing hardware. However, the aspects that differentiate these phones are their screen size and camera array. Of course, Galaxy Fold, the brand’s first foldable display smartphone stole the limelight at Samsung’s big event. The company introduced a Galaxy S10 5G version as well with a few clutch upgrades as compared to the other three Galaxy S10 models.

The headline features of the next-generation Galaxy S10 lineup is its subtly curved Infinity O display with a hole punch that accommodates front cameras, an ultrasonic in-display sensor that reads a 3D image of your finger and reverse wireless charging. Another core aspect of the Galaxy S10 series is its multiple camera array and new imaging software that is claimed to enhance the camera experience.

Following in Huawei’s footsteps, Samsung has installed a three-camera array on the Galaxy S10 and S10 Plus. The cheaper Galaxy S10e comes with dual rear cameras while the S10 5G gets special treatment in the form of a four-camera array. All the models use AI to identify nearly 30 different scenes and adjust settings accordingly.

Here’s the conventional camera configuration of the Galaxy S10 series: 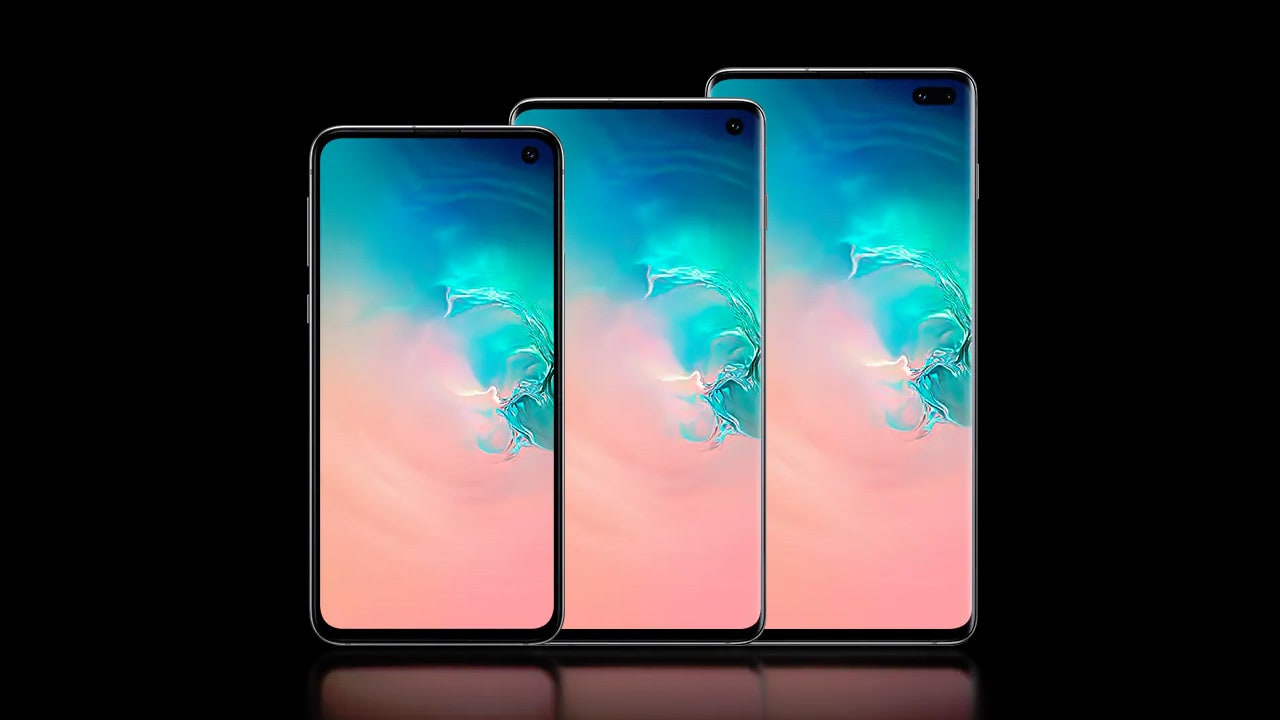 The Samsung Galaxy S10 lineup in all its glory.

The 16 MP ultra-wide angle lens has a 123-degree field of view, while the 12 MP wide-angle and telephoto lenses have a 77-degree field of view and a 45-degree field of view respectively. The trio on the Galaxy S10 with the camera software transitions offer "seamless" zooming capability and flexibility to shoot ultra-wide landscapes, group selfies and portraits. The 16 MP camera has a fixed aperture and flash, but given that it's so wide, the lack of focusing options isn't such a big deal, at least in theory. The 12 MP sensors support OIS.

Samsung has taken due care of selfie shooters and vloggers as well. Users will now be able to capture sharp and clear videos with the Galaxy S10 series as it comes with native support for 4K video shot in HDR10+. The phones support super steady video, which is designed to capture stable action shots.

Another interesting feature is the Shot Suggestions that helps to align the composition of a frame using two guiding orbs. But this is an optional mode which you can turn on whenever you feel necessary.

The new Shot Suggestions feature on the Galaxy S10 now help in aligning composition in a frame. Image: Samsung

As for selfies, while clicking a photo on the Galaxy S10 the edges around the front-facing camera light up to help users adjust the frame and take the perfect selfie. To add more fun, Samsung has implemented 4K video recording capabilities on the front-camera as well. The Live Focus first introduced on the flagship Galaxy Note 8 is now present on the Galaxy S10’s front shooter which means you can adjust the depth of field after clicking the photo as well.

Interestingly, the Galaxy S10 camera now comes with a dedicated Instagram mode. This mode basically removes the burden of opening the Instagram app, taking a photo, editing it and sharing on the platform. The phone’s native camera app allows users to access Instagram Stories, capture shots and use filters and share the images to their timeline instantly.

The cameras now stack shots of a larger scene in a single frame, be it horizontally or vertically with the new Ultra-Wide Panorama mode. Other important features on the Galaxy S10’s native camera app include improved bokeh for shooting portraits. The Live Focus now offers a host of shooting modes like Blur that effectively blur the edges of a subject and Spin and Zoom Bokeh that add kind of an artistic effect to photos. There is also a Colour Point mode that keeps the colour of the subject in the foreground stand out and desaturates the rest of the elements in the frame.

The Live Focus on the Galaxy S10 gets few add-ons including Spin Bokeh and Colour Point. Image: Samsung

Lastly, the Samsung Galaxy S10 now gets a Bright Night low-light mode. The feature is said to make low-light photos brighter and crisper.

The Samsung Galaxy S10 camera includes a list of impressive features that are sure to grab the attention of camera aficionados, vloggers and above all, Instagram feeders. But while Samsung has made a noble effort on the imaging segment of its new flagship series, it remains to be seen how the 2019 Galaxy S flagship will rival against Google’s premium Pixel 3 that delivers remarkable output single-handedly (just one camera lens).

Samsung Galaxy S8: On the fence? Here are 8 arguments to convince you to pick one up today