The PG258Q is a gamer’s monitor. It boasts of a 240 Hz FHD TN panel with a 1 ms response time and supports G-Sync.

We gamers aren’t exactly practical folk. We don’t settle for something that just works or is just “OK”. We somehow justify spending Rs 10,000 on a mechanical keyboard because we like the way it “feels”. We need a mouse with a 15,000 DPI sensor because we want precision. We have to have the best graphics cards because we want to dial those settings to maximum. 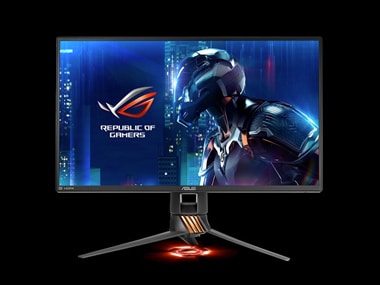 For a gamer such as this, the monitor is a critical part of their setup. It’s what completes the package, and it better be good.

Gaming displays come in an assortment of shapes and sizes. The best ones sport high refresh rates and support Nvidia’s G-Sync or AMD’s FreeSync. We can’t have tearing in our games now, can we?

On paper, the ASUS ROG Swift PG258Q ticks all those boxes while managing to look particularly nice. In fact, the first thing that hits you when you unbox the PG258Q is just how exceedingly cool that three-pronged stand looks in person – the second thing that hits you is just how garish that projected LED logo is, which can, thankfully, be turned off.

To answer that, you have to really understand what this monitor is. This is not a monitor for a designer. The TN panel is nowhere near as colour accurate as a ASUS’ ProArt monitors or Dell’s IPS beauties. The measured colour space – using DisplayCal and a Spyder 3 calibration unit – came in at about 92 percent sRGB before calibration. By default, there’s a slight magenta cast to the display and the backlight bleeds through in darker scenes. Also, if you have an AMD graphics card, you’re not even taking full advantage of this monitor. The rear of the monitor is actually quite beautiful. Image: ASUS

No, this monitor is clearly not the most colour accurate one around and neither is it the cheapest.

It is, however, one of the fastest monitors you can buy in India today, and for the right kind of gamer, that speed is everything. Hook up a powerful Nvidia GPU (a GeForce GTX 970 in our case) to the monitor via DisplayPort and you’re looking at a very potent game changer.

For gamers who’re used to gaming at 60 Hz, the upgrade to 120/144 Hz can almost be revelatory. Suddenly, everything is buttery smooth, there’s no input lag and there’s definitely no tearing, thanks to the added benefit of G-Sync. Fast-paced games like Counter-Strike and Doom just feel incredibly fluid. This is an experience that’s hard to describe to anyone who’s never experienced it, but take my word for it. After spending a couple of hours with this monitor, you won’t be able to go back. 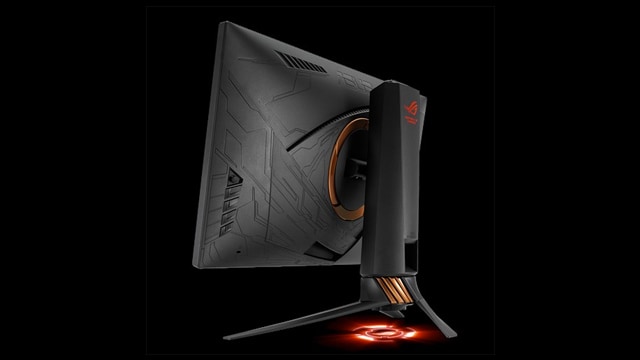 That stand offers a lot of flexibility and is very stable in any orientation. Image: ASUS

On a side note, I'm still in two minds about the 240 Hz option. The difference between 60 Hz and 144 Hz is stark, but the difference between 144 and 240 is almost negligible. The non-gamers who tried the monitor could not tell the two modes apart. After spending several hours at 240 Hz and then coming back to 144, the difference was subtle, but immediately apparent.

If you are the type of competitive gamer who ASUS appears to be targeting with this monitor, you will love the higher refresh rate.

The monitor also boasts of other, gamer-specific features, like an in-built crosshair, a frame-rate indicator, etc. I will admit that I never used these more than once, but I can see how these features can be useful.

Another great thing about this monitor is its build. The monitor is very well built. It feels solid and premium. The legs are very sturdy, there’s no wobble to the display. The design is also very cool, in a Lamborghini Centenario kind of way, cool, exciting to look at, but not necessarily practical. The screen can is fully adjustable and perfectly stable at any orientation. The thin bezels also mean that you can easily use this for a triple monitor setup (provided you have Rs 2.0 lakh to spare).

My one complaint with the build is with the back panel. There’s a removable plastic panel at the back which hides the power cord and other cables. Video inputs are limited to DisplayPort and HDMI, but the worst part is that the USB ports are hidden behind that back panel. There's no way to access the ports without removing the rear panel. That panel also feels cheap and flimsy and kept falling off. In the end, I simply removed it and chucked it into the monitor’s box for safe-keeping. It’s not like anyone’s going to stare at the rear anyway.

The ASUS ROG Swift PG258Q is an exceptional monitor, but it’s also priced to match. For the average user, there are simply too many options in the market more suited to their needs.

The monitor’s price is also a problem because even for gamers, you can get alternatives like the Acer Predator XB271HU. It’s cheaper, larger and offers a higher resolution, though it is notably slower.

For a niche audience of dedicated and highly competitive gamers with deep pockets, however, it’s an exceptional choice.