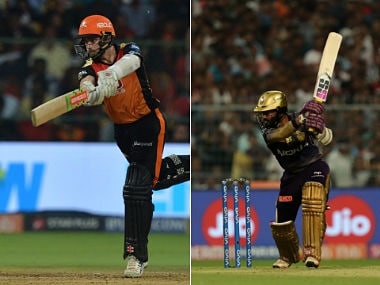 SRH secure an easy win over KKR! A nine-wicket win exactly. First match of Super Sunday has ended being one-sided, we hope RCB vs CSK turns out to be a cracker. That's all from our side for this match. Follow our CSK vs RCB clash blog here. Bye!

This particular fixture has been a nightmare for KKR. Completely outplayed. Right from the toss, nothing went right for the visitors. They never looked like competing in this match. With such a huge defeat, the tournament has become a virtual knock-out for KKR. In order to qualify, now they need to win their four remaining matches in the league stage. Tough equation it is for this out of form team.

Most runs in debut IPL season excluding the first season of IPL:

Dinesh Karthik: We though 160 was a par score. They batted really well but our fielding cost us. And after that dropped catch Bairstow came out all guns blazing. A wicket of Bairstow would have felt better, feel for the guy (Prithviraj). We have been outplayed in this game. Having said that our bowling has been off colour in the tournament. Our fielding needs a lot of improvement too. We had to give Kuldeep a break and get him back fresh.

Largest wins for SRH by balls remaining in IPL:

Largest victories for SRH by wickets in IPL:

SIX! It's over! SRH beat KKR by nine wickets and Bairstow remains unbeaten on 80 off 43.

SIX! What a shot! Tossed up ball by Chawla and Bairstow swipes it over deep square leg

FOUR! Bairstow gets his bat down in time to play the short ball past the short third man fielder

Most runs against an opponent in IPL:

SIX! It's over! SRH beat KKR by nine wickets and Bairstow remains unbeaten on 80 off 43.

Finally! Prithviraj gets a wicket on debut! Slower delivery as Warner went for a slog shot but was deceived by pace as he went early and his stumps were shaken

FIFTY!  Another half-century. This time for Bairstow. What an opening pair this has been for Hyderabad

FIFTY! Warner knocks the ball from Narine to long-off for a double and completes his half-century

SIX! Cariappa has managed to swat Rashid Khan for a six down the ground. He takes on the quicker delivery and sends it over long on.

OUT! A visually disturbing shot attempted by Chawla ends up in his dismissal. He shuffles across and looks to reverse scoop that over the slips. He loses his balance and he could only manage an edge  to Bairstow.

OUT! Bhuvi persists with a leg stump yorker line. Doesn't nail it properly but Russell fails to connect too. The bat turns in Russell's hands and he cannot get the elevation that he wanted. Finds the man at the edge of deep mid wicket boundary and that's a huge wicket for Sunrisers.

OUT! Lynn dismissed soon after his half-century. Again the slower off-cutter from Khaleel produces the wicket. Lack of pace doesn't help Lynn time his stroke as he lobs it up in the air towards mid off, where Kane Williamson runs in from the deep and with the ball almost dying down. He slides and pulls off a spectacular catch by taking it centimeters over the turf.

FIFTY! Chris Lynn brings up his ninth half-century with a slash over backward point with the ball just about trickling to the fence. Has not been the most fluent innings from the Aussie but credit to him for holding KKR's innings together.

OUT! Rinku Singh looks to go for another big one but the was never in the position to play the pull to perfection. Back of a length cross seamed delivery from Sandeep, it was over middle and off stump, Rinku doesn't have too much room to free his arms and hence cannot get the distance in his pull, Rashid runs in from the deep to complete a smart catch

OUT! It was always on the cards. Proper harakiri from KKR captain. Flicks the flatter delivery to deep mid-wicket and sets out for two straightaway. Vijay was chasing the ball, he gets to it, turns and releases in one motion. Bairstow sees a chance and completes the work. DK with a desperate dive that cannot save him.

OUT! Bhuvneshwar Kumar is brought back into the attack and he has struck immediately. Superb delivery from Bhuvi to get rid of Rana. It was slanted across Rana, who looks to dab it down to third man, but some sharp extra bounce did him. Gets a tickle to Jonny Bairstow.

OUT! Gill departs. It was the slow off-cutter from Khaleel and he has managed to draw a false stroke from Gill. He was looking to drive it through covers, but the off-cutter ensured the ball took the outside half of the bat almost like a slice. Straight to point for a simple catch. Khaleel is has two wickets in two overs.

OUT! Bowled'em! Khaleel drops the slower delivery on the stumps and Sunil Narine, clears his front leg and misses a wild slog, the ball hits the timber and the leg pole is knocked out. Khaleel is pumped.

IPL 12 Match 38 SRH vs KKR at the Rajiv Gandhi International Stadium in Hyderabad: SIX! It's over! SRH beat KKR by nine wickets and Bairstow remains unbeaten on 80 off 43.

IPL 2019, SRH vs KKR, Today's Match Preview: Sunrisers Hyderabad will look to build on the winning momentum when they take on Kolkata Knight Riders at the Rajiv Gandhi International Stadium in Hyderabad on Sunday.

In their last match against Chennai Super Kings, the Hyderabad side chased down a relatively small target of 133 with five wickets in hand and 19 balls to spare. This was a much-needed win for the Kane Williamson-led team as they broke a three-match losing streak.

Once again, the key will be their opening batsmen David Warner and Jonny Bairstow and the bowling hopes will be largely dependent on Rashid Khan.

Meanwhile, Kolkata Knight Riders will hope to get back to winning ways after suffering a defeat against Royal Challengers Bangalore in their last match. Kolkata failed to chase down a huge total of 214 despite some late hitting from ever-reliable Andre Russell. The West Indian, who is in terrific form, blasted 65 from just 25 balls, hitting nine sixes in the process.

SRH have played eight games and currently sit fifth on the table having won four and losing as many matches. Kolkata after nine matches, suffering defeats in five and winning four game are sixth on the table.