With Valentines Day around the corner, a couple of romantic dramas are making their way to the streaming platforms. In Taj Mahal 1989, Netflix India is trying to decode love in a period sans technology and dating apps. With Pawan and Pooja, MX Player explores lives of three couples belonging to different generations – all coincidentally named Pawan and Pooja. Meanwhile, Dear Comrade, Arjun Reddy actor Vijay Deverakonda brings forth yet another love story with World Famous Lover.

On Bollywood's platter, Tiger Shroff is returning as action hero Ronnie for the third instalment of his popular Baaghi franchise.

(1/2)The rebel is back & this time he's up against a nation to fight his greatest battle! Catch the explosive #Baaghi3Trailerhttps://t.co/J7qoHtrFir#SajidNadiadwala

Tiger Shroff returns as the rebellious action hero Ronnie, and is even ready to take on an entire nation after he finds his brother (Ritiesh Deshmukh) is being held hostage in Syria. The high-octane action film is slated to release on 6 March. Hollywood Spiral

Lionsgate is bringing the Saw horror movie franchise back to the big screen with the upcoming thriller Spiral. Starring Chris Rock, Samuel L Jackson, and Max Minghella as detectives, the trailer sees the trio occupied with an investigation of gruesome murders of the cops in the city. While the clip does not give away much on the criminal mastermind or his motive behind the killings, the footage gives a glimpse into the regular tropes of the franchise and criminal's tools such as chains and a jigsaw.

The thriller is scheduled to release on 15 May.

The thriller features Elizabeth Moss as Cecilia Kass, who is traumatised and harrowed by her former ex-boyfriend. Cecilia claims Adrian Griffin (Oliver Jackson-Cohen) was abusive, has now faked his own death, and learned how to become invisible. The Invisible Man is slated to release on 28 February. Streaming Yeh Ballet

The Taj Mahal 1989 trailer, in case you'd like to go back to a simpler time.https://t.co/r9Yty7lCYC

Set in Lucknow, the web series traces nuances and politics in love through different couples. Timed to the 80s, Taj Mahal 1989 charts how couples navigate through these romantic upheavals during a period when no dating apps existed. Taj Mahal 1989 debuts on 14 February on Netflix.  Pawan & Pooja

Filmmakers Shaad Ali (Ok Jaanu), Siddharth P Malhotra (Hitchi), and Ajay Bhuyan collaborate on the show, which explores lives of three couples belonging to different generations – all coincidentally named Pawan and Pooja. In Pawan and Pooja, the couples in different age groups discover that love is conditional, breakable, and sometimes, even questionable.

Pawan & Pooja is slated to release on 14 February.

All the Bright Places

Elle Fanning and Justice Smith feature as star-crossed lovers who struggle with the emotional and physical scars of their past. It releases on 28 February on Netflix.

“You’re all the colors in one — at full brightness.” ALL THE BRIGHT PLACES lights up Netflix on 2/28. pic.twitter.com/7MoaqGEKG4

South Indian Films World Famous Lover   I knew this was going to be my last love story, so we decided to make this one of its kind. Filled with all kinds of love. I present to you, #WorldFamousLover! Releasing this Valentine's Day - Feb 14th.#WFLTrailer - https://t.co/p86vDMb8PG — Vijay Deverakonda (@TheDeverakonda) February 6, 2020

World Famous Lover sees Vijay Deverakonda as a lovelorn protagonist, and tries to touch upon his love story as a young adult, his relationship with his wife, an affair gone awry with his boss, and how he charms Leite, a foreigner. The trailer does not reveal whether these are four different stories or whether all these incidents occur in one man's life. 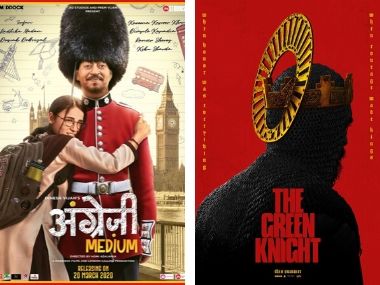