By Jonathan Allen MINNEAPOLIS (Reuters) - A cashier who was one of the last people to speak with George Floyd alive last May testified at former Minneapolis policeman Derek Chauvin's murder trial on Wednesday of his regret accepting the fake $20 bill that led to Floyd's deadly arrest. Chauvin, who is white, was fired by the city's police department the day after he was captured on video with his knee on the neck of Floyd, a Black man in handcuffs. 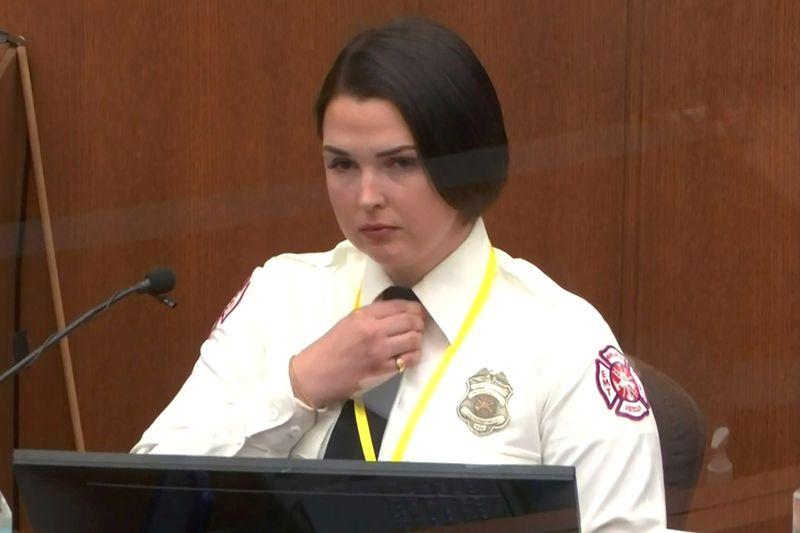 MINNEAPOLIS (Reuters) - A cashier who was one of the last people to speak with George Floyd alive last May testified at former Minneapolis policeman Derek Chauvin's murder trial on Wednesday of his regret accepting the fake $20 bill that led to Floyd's deadly arrest.

Chauvin, who is white, was fired by the city's police department the day after he was captured on video with his knee on the neck of Floyd, a Black man in handcuffs.

In body-worn camera footage played on Wednesday, Chauvin could be heard defending his actions soon after to a bystander by saying Floyd was "a sizeable guy" who was "probably on something." It was the first time the jury has clearly heard Chauvin speak in any substantive way.

He has pled not guilty to murder and manslaughter charges. and a central dispute in the case is his lawyers' contention that Floyd's death, which was ruled a homicide, was instead a drug overdose.

The jury watched video on Wednesday that showed a cheerful-looking Floyd in his final minutes inside a grocery store, during which Christopher Martin, the cashier, said Floyd made friendly conversation and seemed to be under the influence of drugs.

Several other eyewitnesses, one a child of nine, have spent the last two days describing to the jury the shock of watching Floyd's struggle beneath Chauvin as bystanders screamed at police that Floyd was falling unconscious. Video footage of the arrest on May 25, 2020, sparked global protests decrying police brutality against Black people.

Here are some of the most important moments from the third day of testimony:

It was Martin, a cashier at the Cup Foods grocery store, who accepted the $20 bill that triggered everything that followed.

"I thought that George didn't really know it was a fake bill," Martin, 19, told the jury. He considered letting Cup Foods just dock it from his wages, but ended up telling his manager and a few minutes later police were arresting Floyd on suspicion of passing a counterfeit.

Silent security-camera video played for the jury shows Floyd dressed in a black tank top approaching Cup Food's counter with a banana in hand, smiling and making cheerful conversation and putting his arm around a woman. Floyd appears to be filled with energy and constantly in motion, at one point almost dancing on the spot, shifting his weight from one foot to the other.

Martin, 19, told the jury that he made conversation with Floyd, asking him if he played baseball. Floyd seemed to take time to find his words but replied that he played football, Martin said.

"He seemed very friendly, approachable, he was talkative, he seemed to be having just an average Memorial Day, just living his life," Martin recalled. "But he did seem high."

Although the county medical examiner ruled Floyd's death a homicide resulting from the police restraint, fentanyl and methamphetamine was found in Floyd's blood at autopsy and Chauvin's lawyers argue the death was really a drug overdose.

Martin sold Floyd a pack of cigarettes. He told the jury he thought the bill was counterfeit and considered just letting the store deduct it from his wages, but then decided to tell his manager, who told Martin to go and confront Floyd, who had got back into a car outside with two other passengers.

Floyd was "just kind of shaking his head and putting his hands in the air, like, 'Why is this happening to me?'" Martin said.

Martin's manager told a coworker to call the police after Floyd and the other passengers refused to come back inside the store.

Martin later said he was upset to see Chauvin on top of Floyd, and went up to another Black man on the sidewalk.

"They're not going to help us, this is what we deal with," he recalled telling the other bystander, referring to police.

"I thought if I would not have taken the bill this would have been avoided," he said.

"You can't win!" Charles McMillan can be heard telling Floyd over and over again in videos of the arrest.

One of the first to notice the arrest, McMillan, 61, pulled off his white spectacles and dropped his head into his hands in tears as he watched video of himself stood near Floyd as they dying man called out for his recently deceased mother. The court recessed for about 10 minutes so McMillan could gather himself.

McMillan, who that day was dressed in flip-flops, shorts and a black t-shirt, was one of the last people to speak with Floyd.

"Get up and get in the car," McMillan says to Floyd.

"I can't," Floyd replies in an agonized voice from beneath Chauvin.

McMillan summarized his thinking to the jury: "Once police get the cops on you, you can't win, so I'm trying to tell him to just cooperate."

After Floyd's limp body was loaded into an ambulance, Chauvin got into a police car, and McMillan walked over: "I don't respect what you did," he told the officer

"I had to control this guy because he's a sizeable guy," Chauvin replies through the window. "It looks like he's probably on something."