Perseverance will land in the Jezero Crater, in February 2021, which is thought to have once been a water-filled lake 3.5 million years ago.

July sure has been a space-tastic month. The rare comet Neowise made its appearance in many parts of the world. Five planets lined up in the night sky. Two different meteor showers are gracing the skies, and two Mars missions shot into space from China and the UAE.

The month has also ended with a bang, what with another Mars mission that launched on 30 July. The National Aeronautics and Space Administration's (NASA) had a two-hour launch window to launch its fifth Mars mission, the Perseverance Mars rover. The window to launch opened at 5.20 pm IST (07.50 am EDT) and closed at by 7.20 pm IST (9.50 am EDT). However, Perseverance lifted off from Cape Canaveral Air Force Station, Florida aboard the United Launch Alliance Atlas V rocket, right on time. The United Arab Emirates Al Amal (Hope) Mars mission, was successfully sent off on 19 July, and China’s orbiter-rover-lander mission Tianwen-1  launched on 22 July and all three missions are scheduled to reach Mars by February 2021.

What is the Perseverance rover?

Seventh-grade student Alexander Mather from Virginia was the lucky child whose name got picked from around 28,000 entries in NASA’s 'Name the rover' essay contest back in 2019. In his submission essay, Mather wrote, “We are a species of explorers, and we will meet many setbacks on the way to Mars. However, we can persevere. We, not as a nation but as humans, will not give up. The human race will always persevere into the future.”

Perseverance is a six-wheeled rover about the size of an SUV, weighing 1,040 kilograms. It is NASA's most advanced rover to date. It has a 2-meter robotic arm with a stronger grip and bigger drill than the rovers that came before, to help pick up rock samples. The rover is packed with 23 cameras, most of which record in colour, outside of the two cameras on the accompanying Ingenuity helicopter. 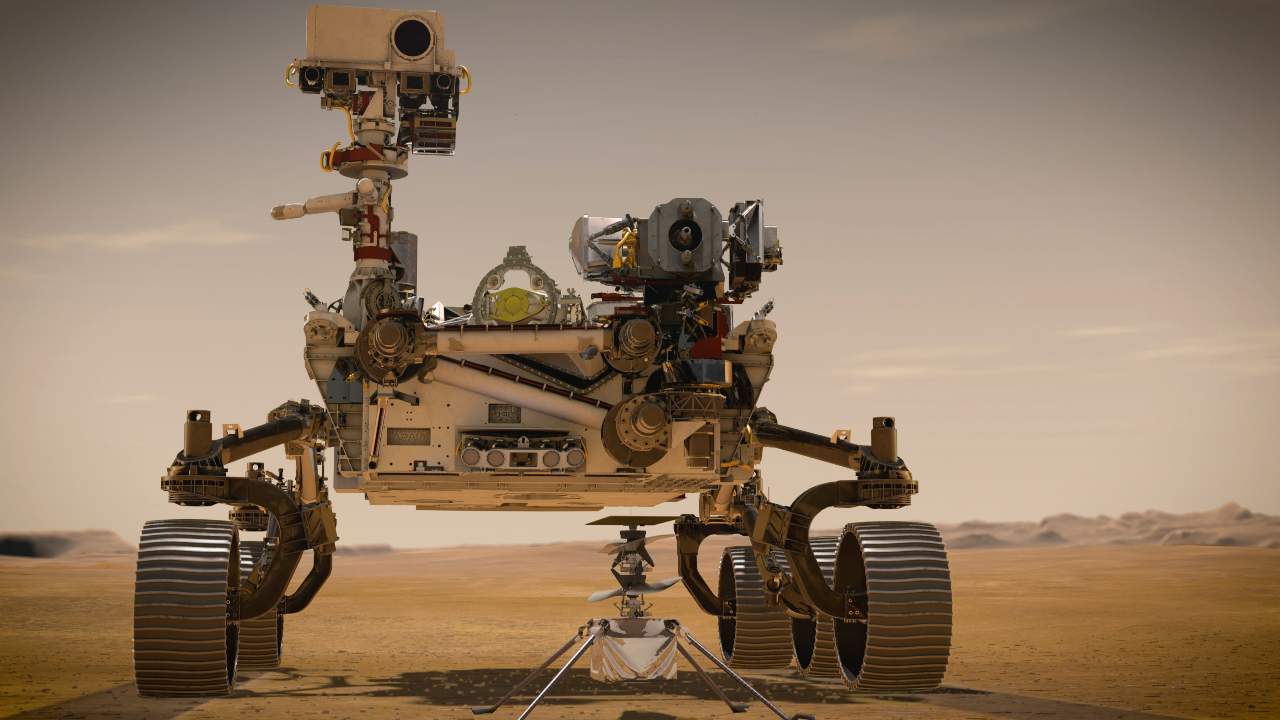 Perseverance is the most sophisticated rover NASA has ever sent to Mars. Ingenuity, a technology experiment, will be the first aircraft to attempt controlled flight on another planet. Perseverance will arrive at Mars' Jezero Crater with Ingenuity attached to its belly. Image credit: NASA

Following a seven-month journey after its launch, Perseverance is aiming to land at the Jezero Crater on Mars on 18 February 2021. While it might look to many like a carbon copy of the Curiosity rover which is currently exploring the Gale Crater, the two rovers are very different indeed. [Though Perseverance was even built using some leftover parts from Curiosity, so you’re forgiven for thinking it if you did.]

The rover is carrying three silicon chips bearing the names of nearly 11 million people who signed up to ride along on Perseverance’s journey to Mars. It will also carry an anodized plate showing Earth and Mars on opposite sides of the sun with the message “Explore as one” in Morse code, tucked into the solar rays. Another cool memorabilia the rover will carry is a plaque that pays tribute to medical workers on the front lines of the coronavirus pandemic.

With Mars at the centre of human exploration, NASA is also sending the first samples of the spacesuit material that the astronauts will wear on the Red Planet. The materials, including a piece of helmet visor, are stashed alongside a fragment of Martian meteorite in the rover.

The rover has three antennas that serve as both its "voice" and its "ears" and are located towards its back. Perseverance will rely on the Mars-orbiting spacecraft to relay data from the rover to the antennas of the Deep Space Network, according to a NASA blog post. The DSN is an international network of antennas that provides communication links between planetary exploration spacecraft and their mission teams on Earth. It consists of three deep-space communications complexes present around the world: Goldstone, in California's the Mojave Desert; near Madrid, Spain; and near Canberra, Australia. 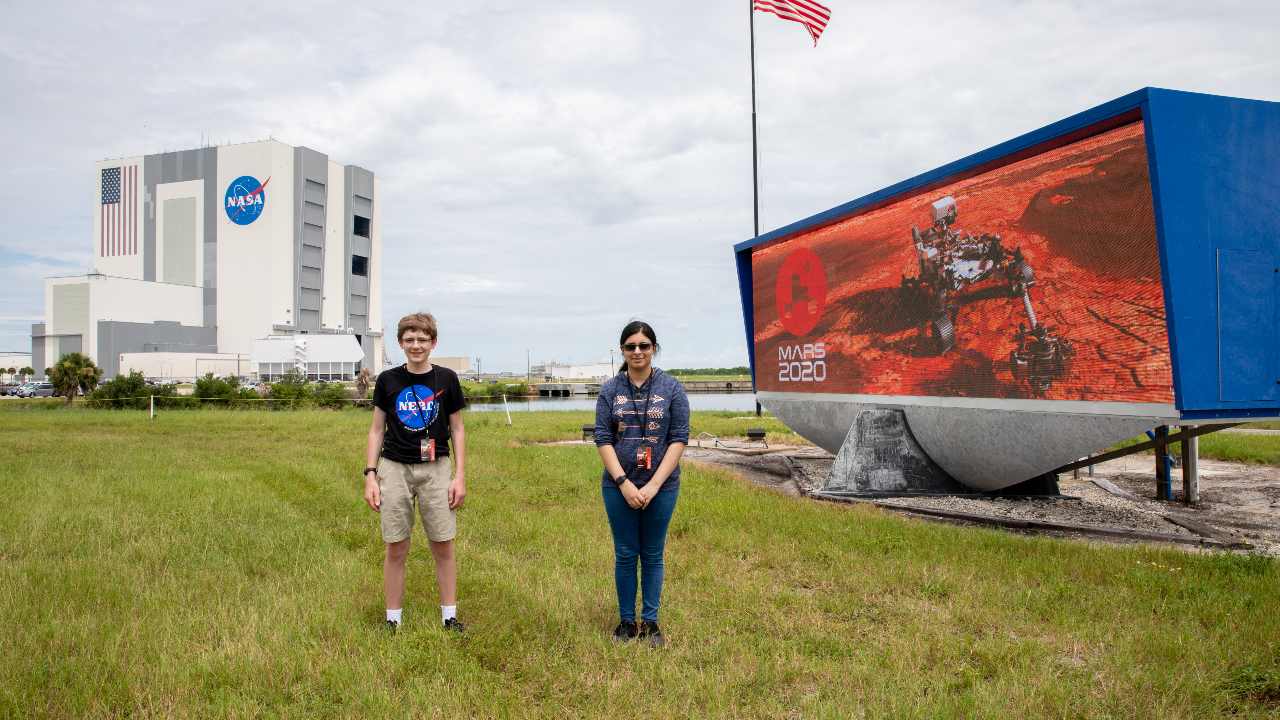 Students Alex Mather, at left, and Vaneeza Rupani, stand near the countdown clock at the News Center at NASA’s Kennedy Space Center in Florida on July 28, 2020. Alex was selected to name the Perseverance rover, and Vaneeza named the Ingenuity helicopter. Image credit: NASA/Kim Shiflett

The Ingenuity helicopter accompanying Perseverance gets its name from high school student Vaneeza Rupani, who came up with the name during NASA’s ‘Name the Rover’ essay contest. NASA quoted Rupani as saying, “The ingenuity and brilliance of people working hard to overcome the challenges of interplanetary travel are what allow us all to experience the wonders of space exploration.”

After landing on Mars, Ingenuity will safely detach itself from the rover and hop 12.7-cm away from the rover before attempting its first automated lift-off on another world.

Ingenuity will start out like a baby bird, rising three meters into the planet’s extremely thin atmosphere and flying forward up to two meters, according to a report in the Associated Press. With each attempt, it will try to go a little higher and farther.

Ingenuity's fuselage contains computers, cameras and batteries the size of a football. The helicopter also sports an antenna, solar panel, landing legs and two rotors that make deploying the helicopter a challenge.

The helicopter is a technology demonstration i.e, a project that seeks to test a new capability for the first time. It will be the first object to fly on another world for the first time. Weighing around 1.8 kgs, the Mars helicopter has four specially made carbon-fibre blades arranged into two 1.2-meter-long, counter-rotating rotors that can spin at speeds of 2,400 rpm [that's about eight times as fast as a standard helicopter on Earth. "Ingenuity is unlike any other helicopter ever built because powered controlled flight at Mars is unlike anything ever attempted," said MiMi Aung, project manager of the Mars Helicopter at NASA’s Jet Propulsion Laboratory.

The Perseverance rover will seek to better understand the geology of Mars and find signs of ancient life. It’s science objective are to:

The rover is carrying with it seven very important instruments that will help it complete its science objectives. They are: The instruments on the Perseverance rover. Image credit: NASA

The Ingenuity helicopter does not carry science instruments and is an independent experiment from the Perseverance rover’s mission.

What's special about the landing site?

The Perseverance rover will be landing in the Jezero Crater, which is thought to have once been a water-filled lake, home to an ancient river delta some 3.5 million years ago. The modern dried-up lakebed is 250 meters deep and 45 kilometres wide. Scientists think that microbial life may have lived in Jezero, according to a NASA blog post. If so, signs of their remains might still be present in the lakebed or on sediments nearby.

According to a New York Times report, while no one knows if anything ever lived on Mars, if it did, Jezero would be a prime spot to look. This was the main motivation behind the bevvy of scientists at NASA picking the Jezero crater for its next rover exploration.

“We don’t know if life existed there or not. But we do know that Mars at one point in its history was habitable,” AP quoted NASA Administrator Jim Bridenstine as saying on the eve of the launch.

The Jezero Crater is NASA’s riskiest Martian landing site so far, AP reported, with boulders and cliffs to dodge as the spacecraft self-navigated its landing.