From the mouths of babes: bottles that weaned prehistoric infants found in Bavarian graves

Archaeologists have uncovered the first evidence that our prehistoric ancestors in Europe weaned their infants much the way we do now, using specialised baby bottles to feed them animal milk.

The discovery casts rare light on childhood and child-rearing in ancient humans — an area that experts say has long been overlooked.

"This is the first direct evidence for what babies and infants were eating and drinking in prehistory," Julie Dunne, the study's lead author and a biomolecular archaeologist at the University of Bristol, told AFP. 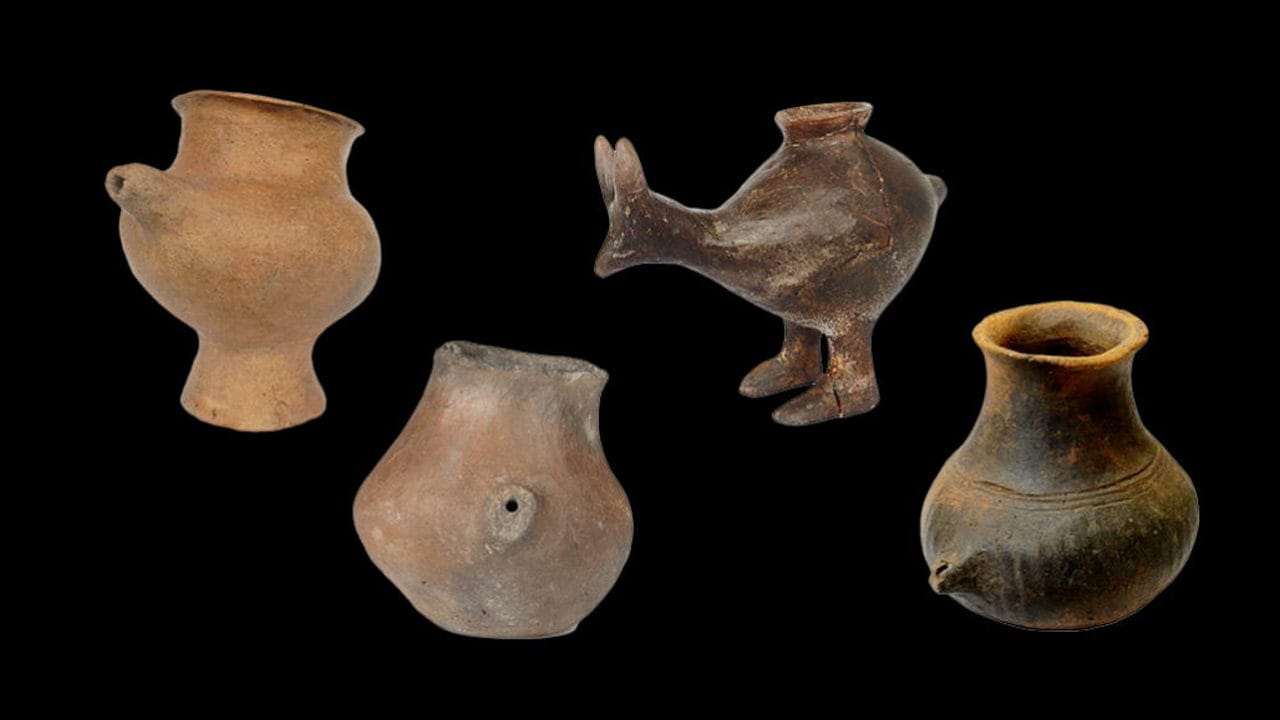 Some small clay vessels found at early European farming sites, such as these 3,200- to 2,800-year-old artefacts, may have been used to feed animal milk to human infants. image credit: KATHARINA REBAY-SALISBURY

The research, published Thursday in the journal Nature, focuses on three bowls found in children's graves in Iron and Bronze Age burial grounds in modern-day Bavaria.

The bowls had narrow spouts and in some cases were shaped to look like animals, details that led archaeologists to suspect they were used as bottles to feed children.

To test the theory they extracted samples from inside the vessels and carried out careful chemical analysis.

They found that two of the bowls appeared to have contained milk from ruminants like cows and the third had traces of non-ruminant animal milk, possibly from a pig or human.

That information, paired with the location of the bowls inside the graves of children, led the researchers to conclude that the vessels were used as bottles to wean infants.

Other, older artefacts believed to be baby bottles have been found by archaeologists, but without clues to confirm purpose they served.

"It isn't until the Bronze and Iron Age that we find them in child graves, and this is crucial as it allows us to confirm that they are in fact used to feed babies and infants," said Dunne.

They offer "a rare glimpse into the ways that prehistoric families were attempting to deal with the challenges of infant nutrition and weaning at this inherently risky phase of the human lifecycle," the study says.

Connection to the past

How our ancient ancestors practiced weaning — moving a child from breast milk to other foods — could help explain more about prehistoric child-rearing but also the development of human populations.

Some experts theorise, for example, that humans began weaning their infants earlier in life after they moved away from a hunter-gatherer lifestyle and settled into farming life, with access to crops and animal milk.

And mothers who stopped breastfeeding early would have returned to post-natal fertility faster, which may have helped fuel a key population explosion called the "Neolithic demographic transition". Conversely, however, weaning infants on animal milk may also have brought new risks. Breast milk provides young children with complete nutrition in early life, while animal milk does not. And unpasteurised milk also poses a risk of bacteria and infection that could have increased childhood mortality, the study notes.

Further research looking at the remains of prehistoric populations could shed light on whether animal milk caused a spike in infant mortality.

Dunne said she hoped to expand the research technique of sampling residue from ancient bowls to better understand how other early humans fed their infants.

"Similar vessels, although rare, do appear in other prehistoric cultures, such as Rome and ancient Greece," she said. "Ideally we'd like to carry out a large geographic study and investigate whether they served the same purpose."

And for all the scientific insight the artefacts offer, Dunne said they should also be valued for the way connect us to our ancestors.

"They are almost toys as well as baby bottles and surely would have made the infants laugh," she said. "I think this shows us the love and care these prehistoric people had for their babies and gives us a very real connection to people in the past."