Colonising the moon: A story of dust, bricks and a printer to build a lunar village

Pink Floyd famously sang of not wanting to be a brick in the wall. Could that change soon?

The Moon was but a chin of gold
a night or two ago,
And now she turns her perfect face
Upon the world below.

The moon has moved people for centuries, and the Earth's tides for at least a couple of million millennia. It's the only celestial body we've managed to reach out and walk on.

Next year, on 20 June 2019, it will be 50 years since Neil Armstrong and Buzz Aldrin took a three-hour stroll on the moon as part of the Apollo 11 mission, which the former famously described as "a giant leap for mankind". The popular photograph of the bootprint captured by Neil Armstrong during NASA's Apollo 11 in 1969. Image courtesy: NASA

Since then, a series of 5 other missions carried astronauts to the moon, ending with Apollo 17 (the mission that also put Harrison Schmitt, the first and only scientist on the moon) in 1972.

Apollo 17 wasn't just man's final moon landing, but the last time humans left the low-Earth orbit, where our manmade satellites do their dance.

After all those years, with NASA's proposed launch of the Orion capsule in 2019, we may finally get to walk on and study the moon again.

And it's not just NASA. Space agencies from countries worldwide have plans lined up to send people to the Moon in the coming years. NASA's Orion spacecraft to Mars is due to undergo a test mission to the moon In 2019. Image Courtesy: NASA

Having humans walk on the moon has yet to lose its magical quality. But after a 46-year-long wait, the playing field has changed dramatically. A simple stroll on the moon's surface is evidently passe. And so, there's not one, but two missions in particular, that trump others in sheer ambition and scale: the Deep-Space Gateway, and the International Lunar Village.

A Gateway to the Moon and Mars

The Deep-Space Gateway (also known as the Lunar Orbital Platform-Gateway) is a space station that will orbit the moon in the early 2030s, pending approval and funding in 2019.

Led by a team with America's NASA, Europe's ESA, Russia's Roscoscmos, Japan's JAXA and China's CSA, the Deep Space Gateway will be poised as a multifunctional basecamp of sorts for missions to the moon, and a gateway for future visits to Mars and beyond, NASA says.

It has been slated for construction starting early 2020s, and is positioned as a sequel to the International Space Station, which is due to be decommissioned in 2024.

A village on the Moon

The second ambitious mission in near-future space exploration is the International Lunar Village, a project led by the European Space Agency (ESA) and presently still on its drawing board.

In the words of ESA's Chief Jan Woerner, the village will "combine the capabilities – be it robotic or human – of all space-faring nations."

Once completed, the lunar village will be a permanent lunar base with capabilities for astronauts to live and work on the moon for long periods of time. It will also act as a hub for research, business, tourism and mining, says Woerner. An artistic rendition of the multi-dome lunar village on the moon, a project led by the ESA. Image courtesy: ESA

There's a lot of research underway towards the moon village. Space nerds from the world-over are studying solutions to the challenges that come with an ambitious project like a village on the moon.

Among the plethora of things that building a village would requires are bricks, concrete, steel and machinery. Also labour, and lots of it. Carrying these from earth is an option, but a very bulky and expensive one.

This has been one aspect of ESA's research: finding an answer to the vexing problem of lugging materials from Earth to the moon.

Using that which is plentiful

The ESA is thinking of using a material that's abundantly available on the moon – the moon itself.

Yes, you read it right. They plan to build igloos on the moon, and use the moon's own soil to do it.

Over the course of billions of years, meteorites small and large have time-and-again crashed on the moon, digging up bits of the moon’s mantle (the layer immediately below the moon's surface) in the process.

Space radiation and the lack of an atmosphere to absorb said radiation has led these broken pieces of moon-mantle to get pulverised into smaller and smaller bits over time, resulting in a layer of fine dust and small rocks that span the surface of the moon.

If you've seen the photograph of Armstrong's bootprint on the moon (the first image in this piece), you've likely noticed how fine this dust really is. That's powdered mantle dust for you, and this loose layer of powder and rock is fancily enough, called "regolith".

Regolith? Sure, we've got some history

Lunar regolith has been on the radar of space scientists for decades.

Back when the Apollo 11 mission was simply a sketch, scientists took into account the "soft and powdery" surface of moon, and how landing on it could be troublesome. When Apollo 11 finally got there, Neil, Buzz and Michael Collins learned that the regolith was firm under the lander, and perfectly suitable to walk, hop around. That was pretty much the only good thing going for them with regard to sand on the moon — the rest was a messy nightmare.

Once they stepped out onto the moon's surface, particles got stuck to their spacesuits, the inside of their lunar lander, got into their eyes and lungs causing them to cough – doing enough damage to earn it a bad rep.

What makes lunar soil particularly abrasive is the lack of weathering of moon rocks by liquid water and gases in the atmosphere – both of which make the sand on Earth far more pleasant to walk on, roll-around in.

Lunar regolith, with its tiny jagged edges, is also known to damage both spacesuits and spacecrafts.

With all of its unpleasant features taken into consideration, ESA's choice of regolith to build lunar bases is still a rational one.

To begin with, regolith is abundant; in some highland areas, it is said to reach depths of upto 15 meters, according to NASA reports. It can be compacted into bricks, and baked into a solid blocks with good compressive strength.

The bricks are set to undergo thorough mechanical testing to determine how durable they are, since some of the bricks showed signs of warping along its edges, since the cooling process after it is baked isn't simultaneous throughout the brick.

“We’re looking [into] how to manage this effect, perhaps by occasionally accelerating the printing speed so that less heat accumulates within the brick,” said ESA materials engineer Advenit Makaya in a statement.

“But for now this project is a proof-of-concept, showing that such a lunar construction method is indeed feasible.”

With brick walls made over a compact regolith layer at least 2-meters thick, according to an old study, most of the space radiation that an astronaut would be exposed to inside a suitably enclosed space can be warded off, much like a tourist wearing an SPF 100 sunscreen.

ESA scientists, however, say the radiation tests would require fresh samples from the moon not long after it is charged from the radiation.

Making bricks out of moon dust is all fine and dandy. But making bricks requires kilns, heat and lots of labour – not things we're planning to transport to the moon anytime soon.

What ESA is planning on doing instead is harness the power of 3D printing on the moon using concentrated sunlight as a a heat source to bake bricks made from regolith.

The process of 3D printing was tried and tested for the first time in ISS's zero-G environs in 2017.

The space station has two 3D printers on board, and has reduced the dependence on extra help from mother earth that is at best, six hours away on a good day with no traffic.

Astonishingly enough, an entirely 3D-printed satellite was launched by Russian astronauts from the ISS in 2017.

The ESA claims that 3D printing could be used to make giant telescopes and arrays for solar power in the near future, and not just build and repair equipment for astronauts in space.

So astronauts won't need to carry truckloads or spaceships full of brick and mortar after all.

They'll instead share a spacecraft with a 3D printer that turns lunar soil into ordinary-looking bricks, to build extraordinary things. Bricks to build bases, bases to live and work in, and one can only hope there's a plan for a club with zero-G dance floors somewhere in there too.

Not just another brick in the wall

Lo and behold, making buildings isn't all regolith is good for. It could potentially play a second, more critical role in helping keep our astronauts alive. 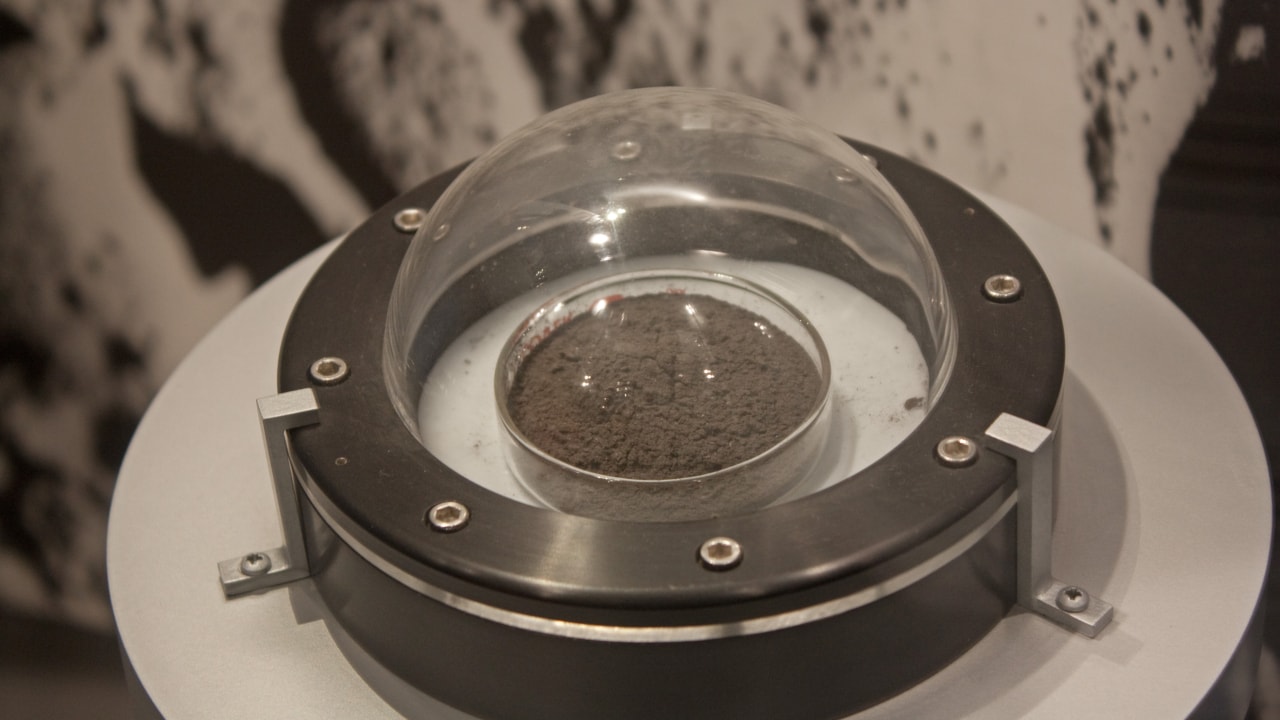 Lunar regolith collected during the Apollo 17 mission on display at the National Museum of Natural History in Washington DC, US. Image credit: Wikimedia Commons

Grains of lunar regolith are dense with mineral and chemical compounds. Compounds like nitrides and oxides which can be converted into  highly useful things breathable oxygen, water and fertilizers. These could open doors  towards making long stays on the moon sustainable.

But doing experiments on the actual moon is difficult and expensive. That's why NASA has been running simulations with mining and harvesting chemical resource from regolith using a moon rover called SCARAB right here on Earth. There's a region in Hawaii where you find a kind of soil known as 'tephra', which closely resembles regolith or moon sand.

NASA's bet is that if their rover, SCARAB, can mine and tweak identical compounds to extract oxygen and other useful substances from tephra on Earth, it can likely do the same thing with regolith on the moon.

In a matter of years, the ESA and NASA could very well be hiring masons to print bricks, a team of lunar engineers to plan a lunar crater-town, and those with a ticket have Earth-view cabins for some Spaceflix and chill.

From the moon, rocks and sand to bricks, 3D printers and villages, it's here – that ever-changing next frontier in space exploration is in our sights.

Pink Floyd famously sang that they didn't want to be a brick in the wall. Given the class and sass of a 3D-printed-regolith-brick-wall on the dark side of the moon, maybe Gilmour and Waters ought to be asked if they'd care to reconsider?