Contrary to popular knowledge, there have been six manned missions to the moon.

In a recent tech2 article about why pictures clicked in space have no stars in the background, readers pointed out that it was rather mysterious how no space agency did a manned mission to the Moon after Apollo 11 in 1969.

"NASA sent men (to the Moon) in 1969. OK, that may be right. But since then, no one including NASA dared to send men again to land on the Moon. It's surprising, and mysterious too," a reader said. To this, another replied: "Not so surprising; there is no requirement to go to the Moon. As it has no importance in terms of minerals and stuff, and going there would be a waste of time."

A third reader, who was even more convinced that there was "nothing surprising" here, then commented, "NASA, along with the majority of other national space agencies, simply doesn't have the resources to do it any more. It costs a lot to build a rocket with enough power to escape low-orbit with all the required equipment and their operating budget is less than a fifth of what it was back in '69..."

These, along with points about politics during the Cold War and harsh surface conditions on the Moon, are justifications often given to defend why the Apollo 11 mission remained the only time astronauts landed on the lunar surface.

However, this is simply not true.

Men have landed on the moon on six separate occasions, beginning with Apollo 11 in July 1969, during which Neil Armstrong gathered fame as the first man to walk on the Moon. [Cue: That's one small step for a man, one giant leap for mankind.] 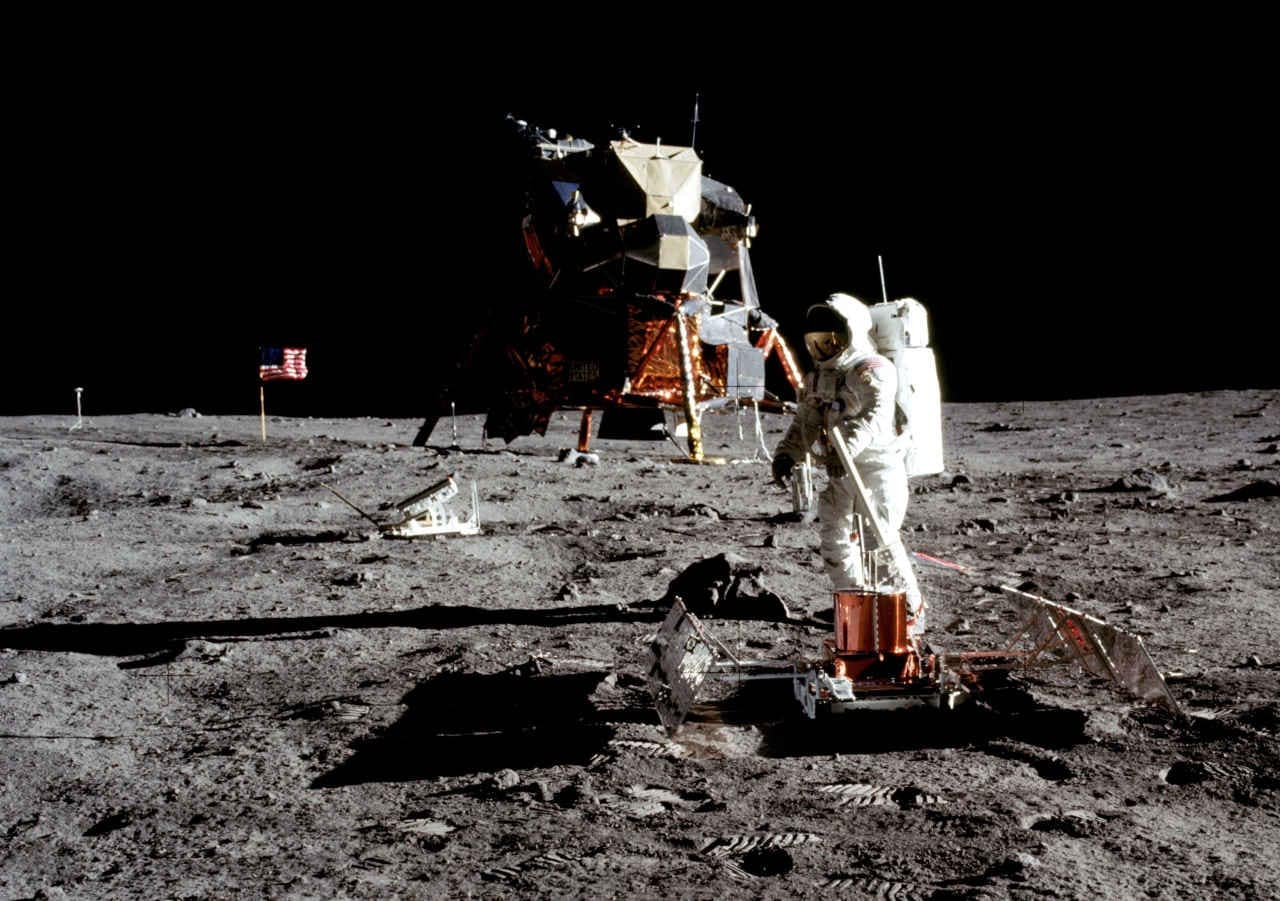 Here is the list of all the other missions that took man to the moon:

Only four months after the first ever manned landing on the Moon, NASA launched its second such mission on 14 November 1969, with astronauts Charles Pete Conrad, Richard F Gordon and Alan L Bean.

The module containing Conrad and Bean safely landed on the lunar surface on 19 November 1969, as Gordon remained in lunar orbit, controlling the units.

"The primary mission objectives of the second crewed lunar landing included an extensive series of lunar exploration tasks by the lunar module, crew, as well as the deployment of the Apollo Lunar Surface Experiments Package, which was to be left on the moon's surface to gather seismic, scientific and engineering data throughout a long period of time," NASA had said. This is the official crew insignia for Apollo 12. Image courtesy: NASA

The crew explored an area of about half a kilometre around their module, and spent almost one day and seven hours on Moon for collecting samples, taking photographs and performing experiments. The Apollo 12 crew returned back to Earth on 24 November 1969.

After the third moon landing attempt failed because of an explosion on board, NASA's next Moon mission — the Apollo 14 — took off from the Kennedy Space Center on 31 January 1971.

With American astronauts Alan Shepard Jr and Edgar D Mitchell on board the lunar module that landed on the Moon, and Stuart A Roosa remaining in the lunar orbit, the crew collected rocks and soil samples from 13 different locations on the satellite.

The astronauts spent a day and nine hours on the Moon for surface operations and scientific experiments, and returned back to Earth on 9 February 1971.

The fourth successful lunar landing was brought about by the Apollo 15 mission, which was launched on 26 July 1971 with three astronauts — David R Scott, James B Irwin and Alfred M Worden. This was also the first manned mission to use a lunar roving vehicle. 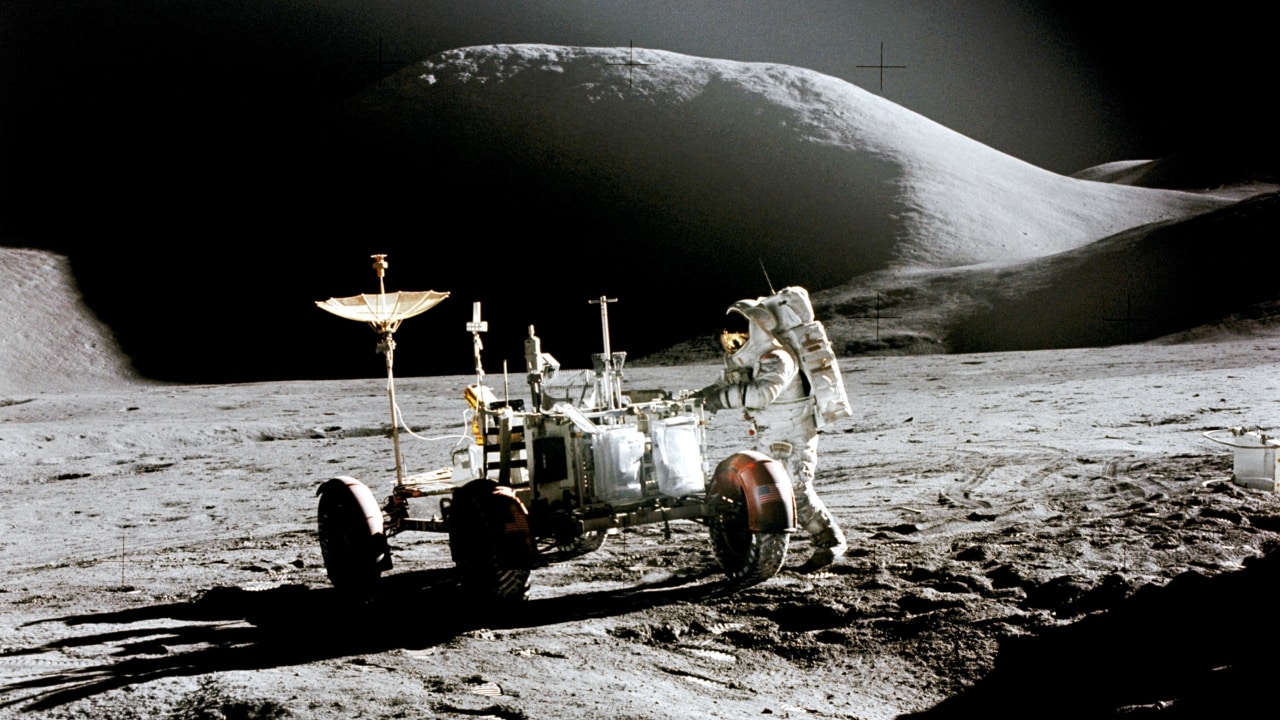 James Irwin works at the Lunar Roving Vehicle during the first Apollo 15 moonwalk. Mount Hadley is in the background. Image courtesy: NASA

Astronauts Irwin and Scott performed 18.5 hours of extra vehicular activity on the Moon's surface using the rover, and collected 370 individual rocks and soil samples during their exploration.

This was all while Worden made multiple scientific experiments staying on the lunar orbit. The mission's crew spent two days and 19 hours on the Moon, and reached Earth on 7 August, 1971, having landed in the Pacific Ocean.

As the first ever moon mission to land in the highlands of the lunar surface, Apollo 16's objectives were clear: (1) to inspect, survey, and sample materials and surface features at a selected landing site in the Descartes region; (2) emplace and activate surface experiments; and (3) conduct in-flight experiments and photographic tasks from lunar orbit.

The mission took off from the Kennedy Space Center in Florida on 16 April 1972, and landed on the Moon's surface five days later on 21 April. While astronauts John Young and Charles Duke spent close to three days on Moon, Thomas K Mattingly performed experiments from the lunar orbit.

Using lunar rovers, the two astronauts conducted multiple extra vehicular activities on several regions of the Moon, and conducted nine scientific experiments (that helped verify Apollo 15 data) at eleven different sites. The crew collected collected almost 90 kilograms of samples from the Moon and drover over 26.7 kilometres on its surface.

The Apollo 17 mission, which was the final Apollo mission from NASA, marked the sixth and last time humans set foot on the Moon. It was launched on 7 December 1972 with astronauts Eugene Cernan, Harrison Schmitt and Ronald E Evans on board.

Apollo 17's lunar landing site was the Taurus-Littrow area on the Moon, where rocks both older and younger than those previously returned from other Apollo missions, as well as from Luna 16 and 20 missions, were expected to be found.

"Scientific objectives of the Apollo 17 mission included geological surveying and sampling of materials in a pre-selected area of the Taurus-Littrow region, deploying and activating surface experiments, and conducting in-flight experiments and photographic tasks during lunar orbit and transearth coast," NASA said.

While Cernan and Schmitt (who was the first-ever scientist to land on moon) stepped down to the lunar surface for scientific experiments, Evans stayed on the lunar orbit. The lunar rover vehicle covered a total of 30.5 kilometres, and the astronauts gathered 110.4 kilograms of material from the satellite. The mission safely returned to Earth on 19 December 1972.

It has now been 46 years since the Apollo 17 mission that man has set foot on the Moon. The primary reason for that is that the goal for lunar missions has shifted to longer and more comprehensive expeditions. "This is much more than flags and footsteps," John Olson, senior NASA official, told Space. "We're going for a sustained human presence in space."

Instead of spending a couple of days on the moon, astronauts are now aiming to embark on missions that could last months. However, NASA's current space shuttles and equipment are not yet capable of crossing low-Earth orbit to reach the moon with the amount of gear required for such a manned expedition.

Until then, NASA's Apollo missions are likely to tell the only stories to be told from ground zero.