Each of these smartphones have different setups, each suited to serve different purposes.

Launched back in March, the Huawei P20 Pro was the first smartphone to feature a triple-camera setup. Since then, we have seen many brands try their hand at launching smartphones with multiple rear camera setups. In fact, Samsung seems to have launched two in the last couple of weeks itself. There are only a handful of smartphones so far which offer the novelty of switching between lenses, but they all do it differently, which automatically results in visually different images.

Each of these smartphones has different setups, each suited to serve different purposes. It also caters to a different group of buyers, because of the price the smartphones are being offered at. The camera setup on the Huawei Mate 20 Pro. Image: Huawei

On paper, the just-launched Huawei Mate 20 Pro features a camera setup which is identical to the P20 Pro when it comes to “megapixelage”. The Mate 20 Pro features a 20 MP camera for super wide shots, one 40 MP shooter in a conventional wide-angle and one 8 MP telephoto camera. What has changed though, is that Huawei ditches the monochrome sensor for larger regular sensors compared to the P20 Pro. The Huawei Mate 20 Pro is the maker's second phone with a triple camera already. Image: Huawei

Huawei also claims to have improved its Master AI 2.0 image processing which is now capable of segmenting elements in an image. This should result in better processing but there’s very little we can say without actually seeing that for ourselves.

Samsung's highlight for one of their newest additions to their mid-premium A Series — the Galaxy A7 — range is that it sports three cameras at the rear. This comprises an 8 MP shooter with an ultra-wide 120-degree lens, a 24 MP primary camera and a 5 MP "depth" camera. 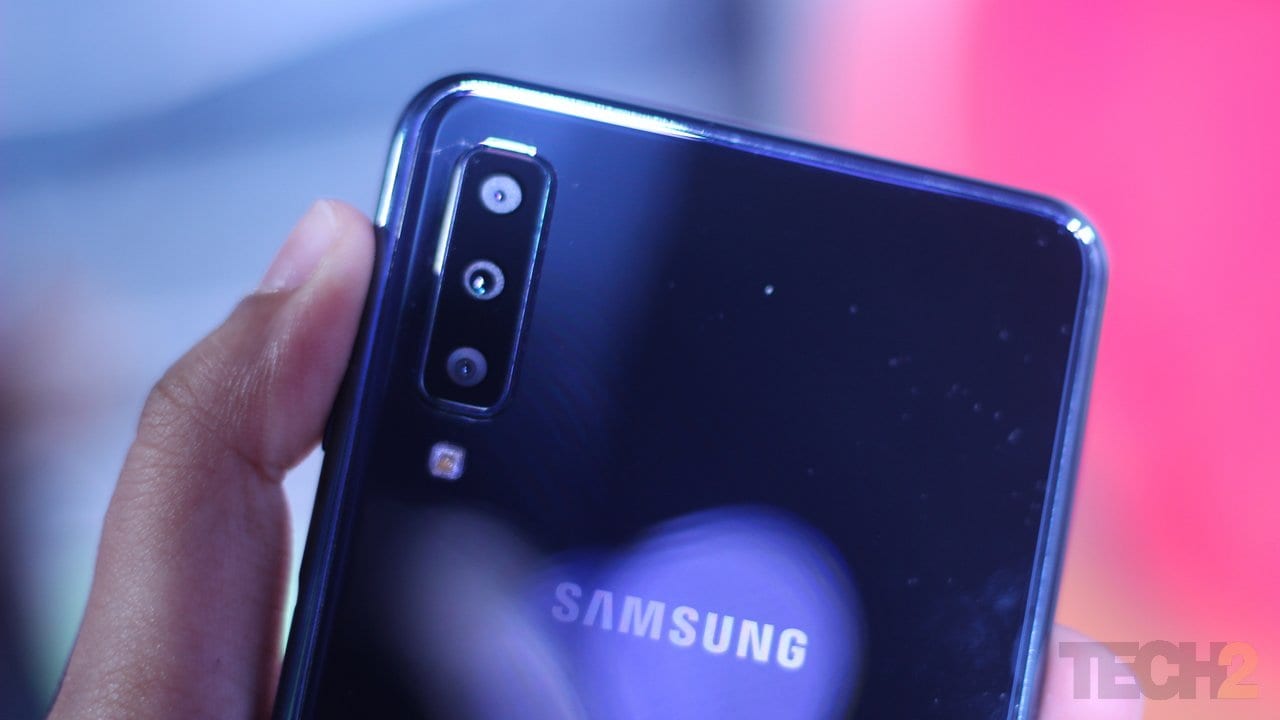 The cameras here also use Samsung's Intelligent Scene Optimiser, which figures out what you're shooting and adjusts the contrast, brightness and colour to optimise image quality.

The Samsung Galaxy A7 is selling in India from Rs 23,990 onwards.

Samsung announced the 2018 edition of the Galaxy A9 recently with four rear-facing cameras, the first phone in the world to have one. While four camera can be better as they offer versatility, the fourth camera on the A9, similar to the A7, is only a depth sensor.

The topmost lens in the module is a 120-degrees ultra-wide lens with an 8 MP sensor and an f/2.4 aperture. This lens is said to make capturing panoramic shots easier for users. Samsung says that this lens captures whole scenes with less panning. There's also a telephoto lens here which was missing on the A7. This is a 10 MP sensor with an f/2.4 aperture, offering 2x optical zoom. This lets you capture more detailed images even when you are farther away from their subject. The Galaxy A9’s third camera (from the top) is the main snapper. It features a 24 MP sensor and aperture of f/1.7, identical to the one on the A7 (at least on paper). Samsung mentions in a blog post that the lens here uses an algorithm (fancily named "pixel re-mosaic") that is capable of maintaining peak performance even in low light conditions, which should effectively reduce noise in images.

The fourth camera is a 5 MP depth sensor with an f/2.2 aperture.

LG was one of the first smartphone makers to feature a dual-camera setup on a phone when they launched the Optimus 3D back in 2011. Fast forward to 2018 and the Korean manufacturer recently announced its final flagship for the year with three cameras on the back.

To talk numbers, the primary camera is a 12 MP unit with an aperture of f/1.5 and a 1.4-micron pixel size. Apart from the larger pixel size and a lower aperture, the lens also features three-axis OIS as well as dual-pixel autofocus. In theory, this should let you take great low-light shots without breaking much of a sweat. Unlike the Galaxy smartphones, you get a choice of three lenses, each offering you a completely different output of what you intend to shoot.

Huawei might not have been the first smartphone brand to slap two cameras onto the back of a smartphone, but they definitely were the first to feature three. While it does sound like a game of numbers, the P20 Pro is by far the best implementation I've seen. That statement does come with a few caveats though and that's because I'm yet to get my hands on most of the phones in this list. This includes the LG V40 ThinQ, the Samsung Galaxy A9 (2018) and the just-announced Huawei Mate 20 Pro. 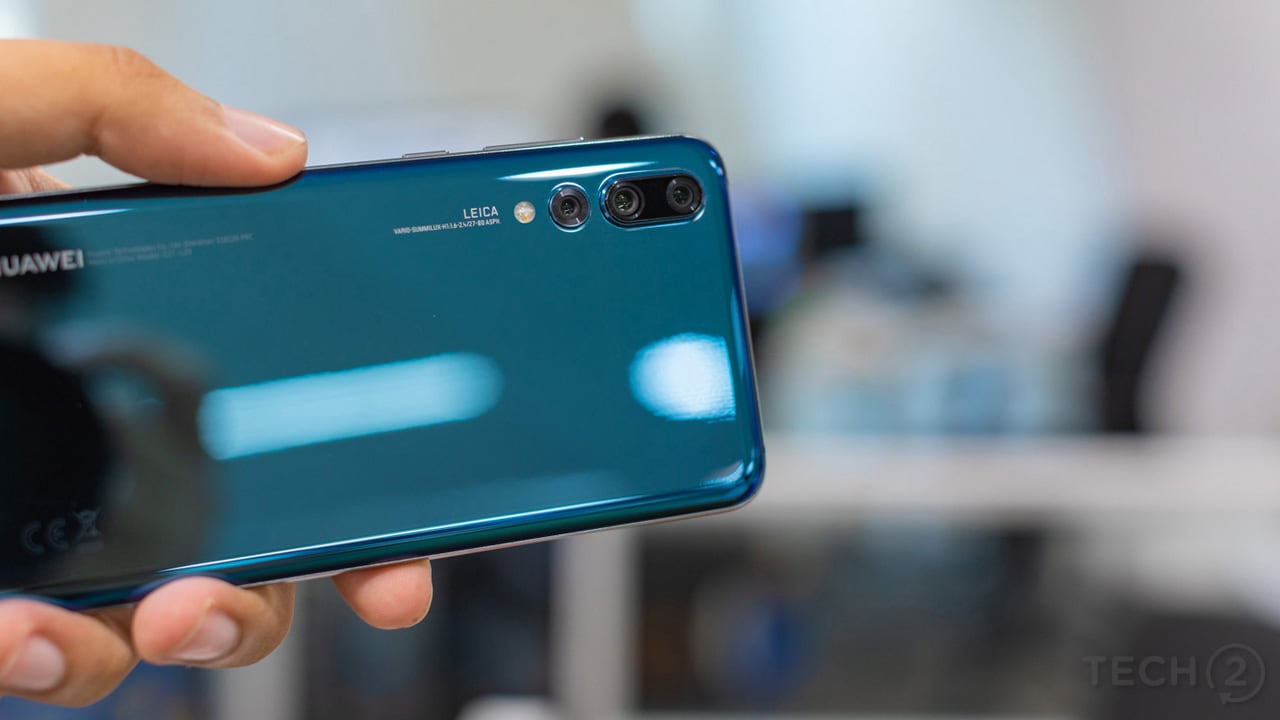 The triple rear camera setup is the highlight of the Huawei P20 Pro. Image: tech2/Rehan Hooda

The 40 MP sensor is the primary camera and captures the colours. Huawei employs pixel-binning which gives you a 10 MP image, which lets you zoom up to 3x optical and 5x digital. You can also select the 40 MP format, but that will not allow you the zoom feature. The 20 MP monochrome camera simultaneously captures detail, assisting the primary camera in improving sharpness. The 8 MP camera meanwhile provides the optical zoom and additional focal length, therefore functioning as a separate lens unit.

Here is the Huawei P20 Pro photo album on Flickr, which will give you a good idea of how the P20 Pro camera performs.

We will be adding on to this list as and when more multiple rear camera setup smartphones launch in the market. So do keep checking back for this one-stop destination for all things with multi-camera smartphones.

Samsung Galaxy A9 to launch in India on 20 November: Here's a look at all we know