As per various reports and teasers, the next version of the Xiaomi's user interface, MIUI 10 will be launched with its next flagship smartphone Mi 8. The Mi 8 is expected to launch on 31 May when the company celebrates its eight anniversary. Xiaomi will also expected to launch its Mi Band 3 during the event. The fitness band is expected to feature a touchscreen display, along with some gesture-based controls. 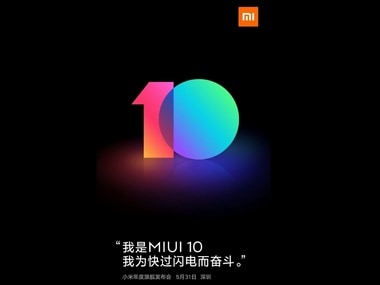 According to a report on TechnoCodex, the latest version of MIUI comes with features similar to the recently launched operating system by Google, Android P. Screenshots of the MIUI 10 user interface leaked online suggests that it will come with a white and blue design and features a shortcut option, which shows the recently used apps. The volume bar for music, alarms and notifications fills up with a blue colour, which reminds us of the thinner bar seen in Android P.

Xiaomi has revamped both the main user interface and also made changes to the control centre, lock screen and weather widget in its latest MIUI software update.