IPL 2017: Sunrisers Hyderabad, despite getting stronger, will try the near impossible as reigning champs

As the saying goes, it is easier to get to the top than it is to stay there. Sunrisers Hyderabad (SRH), in their fourth year of existence, captured their first Indian Premier League (IPL) title, after having finished the 2016 regular season third in the league standings and upending the favored top seeds Gujarat Lions and Royal Challengers Bangalore in the playoffs. In the nine years of IPL, only one franchise has been able to regain the title in back-to-back seasons — the temporarily banned Chennai Super Kings. So SRH will begin their journey in this season of the IPL to attempt the near impossible. 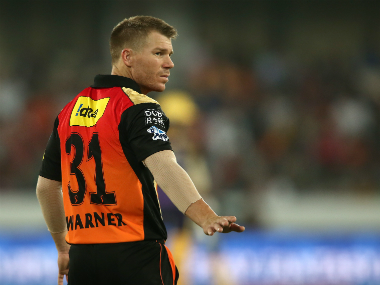 Theories abound as to what the best T20 combination and strategies are. However, the success of SRH in 2016 throws most of them out the window. They were a team that relied heavily on their captain, David Warner, to do the bulk of the scoring, and depended on a bowling attack that lacked a genuine No.1 spinner but was heavily seam-oriented to limit the opposition. There is more than one way to skin the cat.

After the disappointing 2014 and 2015 seasons, when SRH failed to qualify for the playoffs, the leadership changed hands. Even though they began the 2016 season with two defeats, they went on a spree, winning seven of their next eight games. They limped into the playoffs winning only one of their remaining four matches but switched back to giant-killing mode, first knocking out the experienced Kolkata Knight Riders in the Eliminator, before Warner single-handedly chased GL's score in Qualifier 2. In a high-scoring final, they then just about managed to rein in RCB.

Their picks from the 2016 auction, Mustafizur Rahman, Ben Cutting, Barinder Sran, Ashish Nehra, and to an extent Yuvraj Singh too, all played important roles in their title triumph. They have made clever picks again in the reduced 2017 auction, selecting two Afghan players — Rashid Khan and Mohammed Nabi — besides also strengthening their pace department with local Mohammed Siraj, Ben Laughlin and Chris Jordan, and added the experience of Pravin Tambe at bargain basement price. (Their picks earned them a grade of A- in the 2017 auction.)

The winning side from 2016 needed options in the spin department and middle-lower order hitting depth. The addition of Rashid and Tambe, and of Mohammed Nabi and Jordan ought to shore up some of their shortcomings.

With word filtering out that the hugely talented young Bangladeshi pacer Mustafizur is a doubt for most, if not all, of the season, the decision to pick Rashid appears to seem better by the minute. The young leggie from Afghanistan was the success story of 2016, bamboozling batsmen in the World T20 in India, and routing Ireland in the recent bilateral limited over matches in Greater Noida. He should be an automatic pick if Mustafizur's spot were to open up.

With only four overseas slots available, SRH will have limited flexibility considering their captain will take up one of them while another should be reserved for Rashid or Mustafizur. The third spot would be tossup between Nabi and Cutting. Both of them have very good hitting power, with the former offering offs pin variety and the latter, quality medium pace. The choice between them would then depend on the conditions. The fourth and final spot should be a choice between Moises Henriques and Kane Williamson, with Henriques' hitting ability and medium pace a more attractive option.

Shikhar Dhawan, Naman Ojha, Bhuvaneshwar Kumar, Yuvraj Singh, Ashish Nehra would be their main choices for the seven Indian spots in the lineup, with the other two to be fought over by Deepak Hooda, Vijay Shankar, Barinder Sran and Siraj.

Warner finished second behind Virat Kohli in the season's run-getters list with 848 runs, 468 of which came while chasing, the most by a batsman in a single IPL season. Though Dhawan found some sort of form by the end of 2016 season, tallying 501 runs, Warner will require his middle order to do some more of the heavy lifting. A rejuvenated Yuvraj, who earned a national recall as well earlier this year, and the selection of Nabi ought to help SRH on this front.

SRH fast bowlers took 82 wickets last season, the joint second-most for a team in a single IPL season but that number is sure to reduce in 2017 with possible absence of Rahman. Their spinners took only six wickets in 2016 – least for any team in any IPL season – but that is guaranteed to increase with the inclusion of Rashid and Nabi, and should also offset any reduction in the output of the pacers.

In sports, it is said that you need to always to be moving forward or you risk falling behind, and their off-season moves indicate that they have moved forward, strengthening the champion side. On paper, they look an even more well rounded team than the one that won the title. That certainly makes them a clear favorite to top the standings in 2017. Now we wait for the games to begin, on the field.