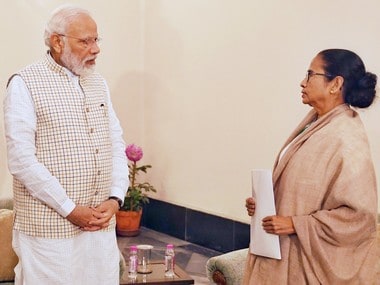 Narendra Modi-Mamata Banerjee Meeting LIVE Updates: Prime Minister Narendra Modi, who is on a two-day visit in Kolkata, unveiled an Ardhnarishwar sculpture at Old Currency Building in the capital of West Bengal. Governor Jagdeep Dhankhar was also present at the unveiling of the statue.

Addressing an anti-CAA-NRC demonstration in Kolkata after her meeting with Modi at Raj Bhavan, West Bengal chief minister said that her government doesn't accept the notification issued by the government on the Citizenship Amendment Act.

"We do not accept the notification issued by the government. It's anti-constitutional. We can't allow citizenship based on religion. The CAA notification will be only on paper, it will never be implemented. We would not allow it," Banerjee said during a dharna against CAA.

Banerjee also said that the peaceful movement against CAA and NRC will continue in West Bengal.

Soon after meeting Modi at the Raj Bhavan in Kolkata, Banerjee participated in the demonstration being held by Trinamool Chhatra Parishad in Kolkata, against CAA and NRC.

Earlier, speaking to reporters after her brief meeting with Modi, Banerjee said that she informed him about her government's stand on CAA, proposed NRC and NPR.

"I told him (the prime minister) that we are against CAA, NPR and NRC. We want that CAA and NRC should be withdrawn," ANI quoted her as saying.

The politically significant meeting between the two leaders took place a short time after the prime minister arrived in the city.

Modi is on his first visit to West Bengal since the passage of the contentious Citizenship (Amendment) Act at a time when the state's chief minister, Mamata Banerjee has been leading an acerbic campaign against the law.

However, notwithstanding the bitterness the two politicians have shared in the past, both are poised to discharge constitutional duties and withhold political niceties as Modi is expected to share the dais with the TMC supremo on Sunday.

Ever since the BJP emerged the main contender of the TMC in West Bengal following the Lok Sabha poll results, Modi and Banerjee have not shared a stage at any government programme. The chief minister had gone to New Delhi in September last year and met Modi in a "courtesy call" visit.

Both are expected to hold a meeting at the Raj Bhavan on Saturday, a state secretariat official said on Friday. They are also likely to share the stage during a programme in Kolkata on Sunday, a source in the Banerjee-led Trinamool Congress (TMC) told PTI. Mamata, who was holding back on the Centre's invitation for almost five days, sent out indications on Friday morning that she could attend the event.

Modi will be on a two-day visit to Kolkata from 11 January, amid ongoing protest at various places in the state against the amended citizenship law. "As far as we know, she (Banerjee) will attend a programme of the Kolkata Port Trust (KoPT) on 12 January, where the prime minister would also be present," a senior TMC leader told PTI.  Modi will reach the city at around 4 pm as per the schedule, said an official at the state secretariat. However, the agenda of the meeting between Modi and Banerjee was not disclosed.

Minister of State for Shipping Mansukh Mandaviya had gone to the state secretariat on Friday to invite Banerjee to the 150th-anniversary programme of the Kolkata Port Trust, wherein Modi will announce projects related to shipping and heritage conservation, say reports. The significant political development comes a day after Banerjee had said in the state assembly that she would boycott an opposition meeting called by Congress president Sonia Gandhi on 13 January over the JNU violence, the Citizenship (Amendment) Act and other "anti-people" policies of the Centre.

West Bengal chief minister Mamata Banerjee had earlier this week, said that she will boycott the Opposition's anti-CAA meeting convened by Congress president Sonia Gandhi on 13 January to protest the violence unleashed in the state allegedly by Left Front and Congress workers during a trade union strike.

The 24-hour nationwide strike by central trade unions across the nation on Wednesday was marked by incidents of violence and arson, blocking of railway tracks and roads by protestors trying to enforce the shutdown in Bengal. Mamata said, "double standards" of the Left Front and Congress will not be tolerated.

"I have decided to boycott the meeting convened by Sonia Gandhi on 13 January in New Delhi as I don't support the violence that the Left and Congress unleashed in West Bengal yesterday (Wednesday)," the chief minister said at the state Assembly.

The new citizenship law has emerged as the latest flashpoint in the state, with the TMC opposing the contentious legislation tooth and nail, and the BJP pressing for its implementation.
Meanwhile, reacting to the likely meeting of the two leaders, the opposition CPI(M)-led Left Front said the Trinamool Congress' "double standard" is now exposed.

"The TMC is actually a Trojan horse in the opposition camp," CPI(M) legislative party leader Sujan Chakraborty alleged. The West Bengal BJP leadership, however, said it is expected that in a federal structure, a chief minister will be present at a government programme attended by the prime minister.