As World Aids Day was celebrated globally on 1 December, a study showed that rapid evolution of HIV, the human immunodeficiency virus, is slowing in its ability to cause AIDS.

Despite the disease being such a dangerous affliction, AIDS still remains a taboo in various parts of the world, including India.

As such, the film industry, especially the Indian film industry, has been skeptical when it comes to making movies on AIDS. However, there are some films that made their mark in the industry by the important messages that they spread about AIDS.

Here is a look at some of the famous and poignant movies about AIDS: 1. Dallas Buyers Club (2013): Matthew McConaughey and Jared Leto won the Award for Best Actor and Best Supporting Actor respectively at the 2014 Academy Awards for their roles in this film, which is based on the true story on Ron Woodroof.

The film not only shows the kind of stigma people suffering from AIDS and transexuals have to face, but also brilliantly portrays the change which the homophobic character undergoes when he himself contracts AIDS.

McConaughey reportedly lost 60 pounds for the lead role of Woodroof and was effortlessly convincing as the AIDS patient struggling to find a better cure and distributing unapproved drugs against AIDS to others suffering from the disease. Sanjay Suri got a lot of critical acclaim for his role in My Brother...Nikhil.

2. My Brother...Nikhil (2005): At a time when almost no Bollywood movie had been made on AIDS, and when the Indian film industry wouldn't touch topics like homosexuality and HIV/AIDS with a ten-foot pole, My Brother...Nikhil made a mark in Bollywood by talking about the elephant in the room no other film would talk about.

The movie, made on a small budget, received a lot of critical acclaim. Sanjay Suri was especially praised for his portrayal of Nikhil, a man whose life falls apart when he gets afflicted with AIDS. Juhi Chawla, who plays Nikhil's sister, and Purab Kohli, who plays Nikhil's boyfriend, also gave an incredible performance. Perhaps no other film in Bollywood talks about homosexuality and AIDS as significantly as My Brother...Nikhil. 3. Philadelphia (1993): "This case is not just about AIDS, is it? So let's talk about what this case is really all about: The general public's hatred, our loathing, our fear of homosexuals." Who can forget Denzel Washington's character, Joe Miller, making strong argument after argument for his wronged client Andrew Beckett, in court in this movie?

Philadelphia is one of the most memorable film made on AIDS, with moving performances by both Washington and Tom Hanks, who plays Andrew Beckett. Hanks won the Academy Award for Best Actor for his role in the film.

Like Dallas Buyers Club, the film also shows how Washington's character himself gets rid of all the bias he has against people afflicted with AIDS and homosexuals. Phir Milenge was a the 'mainstream' Bollywood film made on AIDS.

4. Phir Milenge (2004): If you thought Salman Khan could only be in movies as meaningless as Kick, Ready or Dabangg, Phir Milenge would prove you wrong. Perhaps the first 'mainstream' movie in India based on AIDS, this movie also starred Shilpa Shetty and Abhishek Bachchan apart from Salman. 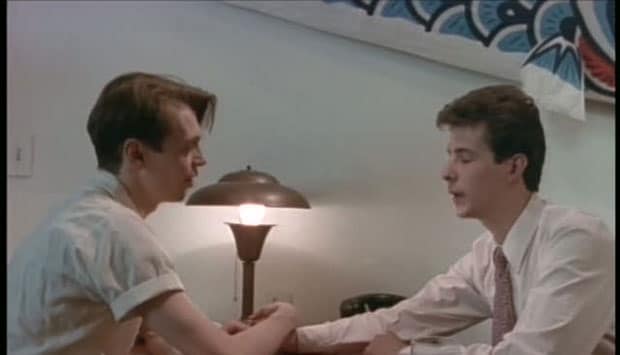 5. Parting Glances (1984): This movie holds a special place in the history of movies based on AIDS. Director Bill Sherwood himself was suffering from AIDS when he made the movie. Sherwood could not make any other movie as he died of complications arising out of AIDS in 1990.

The film plays out a 24-hour period in the life of a gay male couple. Richard Ganoung, John Bolger and Steve Buscemi are remembered for their powerful roles in the film. Parting Glances is also known for its elements of comedy used for the portrayal of a dark and serious issue.