New Delhi: And in mere seconds, India’s tallest towers, famed to be taller than the iconic Delhi Qutub Minar (73 meters) was reduced to rubble – dust to dust. In case you missed watching the shocking demolition of Supertech Twin Towers in Noida Sector 93A, you can get a glimpse of what transpired within those 15 seconds as the mammoth structures came tumbling down.

The nearly 100-metre-high twin towers were brought to the ground by the 'waterfall implosion' technique. The demolition on Sunday (28 August) comes almost a year after the Supreme Court's order to raze the illegally built structures.

Minutes after the demolition, the nearby buildings appeared to be safe. A detailed safety audit is expected later.

Noida twin towers come crashing down after use of 3,700 kg explosives

Noida CEO Ritu Maheshwari said, "Broadly, no damage to nearby housing societies. Only some bit of debris has come towards the road. We will get a better idea of the situation in an hour."

Broadly, no damage to nearby housing societies. Only some bit of debris has come towards the road. We will get a better idea of the situation in an hour: Noida CEO Ritu Maheshwari #SupertechTwinTowers pic.twitter.com/7pfZHu2qGs

Over 3,700 kg of explosives were used in the implosion that brought down the building.

The two towers - Apex (32 floors) and Ceyane (29 floors) - were under construction since 2009 within the Supertech Emerald Court housing society in Sector 93A of Noida, adjoining the national capital of Delhi.

The towers were proposed to have 40 floors with 21 shops and 915 residential apartments.

Warning siren were raised to indicate the beginning of the demolition process.

#SupertechTwinTower | Warning siren raised to indicate the beginning of the demolition process pic.twitter.com/aCG2xNcIv8

Cloud of dust engulfed the area after the demolition of Supertech Twin Towers in Noida today.

#WATCH | Cloud of dust engulfs the area after the demolition of #SupertechTwinTowers in Noida, UP pic.twitter.com/U9Q0mtwe3r

Noida Commissioner of Police said "Largely exercise was executed as per plan, expert teams are on spot. Assessment is being done as of now. Only experts can ascertain post-demolition situation. We're going to site to assess the remnants and left-over explosives if at all they're left there." 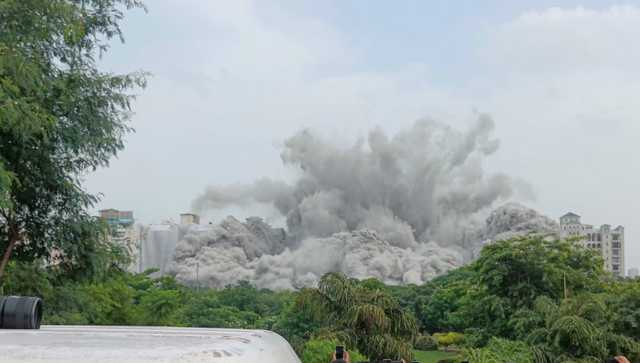 Meanwhile, mountain of debris laid bare, in wake of the demolition of Supertech Twin Towers in Noida. Ahead of the demolition of towers, around 5,000 residents of the adjacent Emerald Court and ATS Village societies vacated their homes for the day.

The demolition of the structures leaves behind an estimated 35,000 cubic metres or 55,000 tonnes to 80,000 tonnes of debris which chiefly includes concrete rubble, steel and iron bars and would take another three months to be properly disposed of.

On 31 August, 2021, the Supreme Court had ordered the demolition of the towers for violation of building norms in "collusion with district officials, holding that illegal construction has to be dealt with strictly to ensure compliance with the rule of law".

The local Noida Authority, which had approved the building maps in the first place, oversaw the mega demolition exercise which had been in planning for almost a year now.

Mumbai-based Edifice Engineering was tasked with the job and it had hired South Africa's Jet Demolitions for its expertise. The Central Building Research Institute (CBRI) was appointed by the Supreme Court as technical expert for the project.

Must Read: No deviation from plan, made full payment to Noida Authority: Supertech plays blame game ahead of twin towers demolition

The apex court ordered that Supertech would bear the cost of the demolition as it noted that the construction of twin towers, which was not part of the original plan for Emerald Court, directly affected the quality of life of its residents.

The video opens by showing the camera zooming on a woman, who can be seen speedily stepping up the stairs of the sacred structure, while people in the background are whistling and shouting at her

The moment when Alvin was stressing about saving animals in the wild, the calf that stood behind the reporter raised its adorably small trunk and kissed him on his ears.