Indore: Amid demands for a CBI probe into the death of spiritual guru Bhaiyyu Maharaj, the Madhya Pradesh Police on Wednesday ruled out any foul play in it, saying the circumstantial evidence suggests he committed suicide, possibly because of domestic discord. 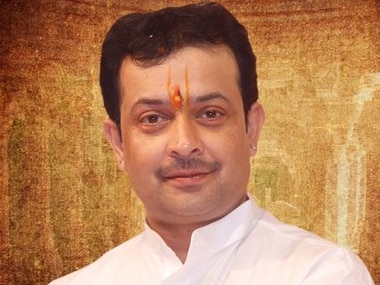 Meanwhile, the second page of the purported suicide note written by the spiritual leader went viral on social media on Wednesday. It says he "is giving the powers related to his finances, properties and bank accounts to his trusted aide Vinayak". An initial probe into the death of the Maharaj has found that he was going through domestic discord, the police said, adding they were looking at the incident from various angles and would not draw any hasty conclusions.

The 50-year-old spiritual leader, whose original name was Uday Singh Deshmukh, allegedly committed suicide by shooting himself at his house on Tuesday, the police said. "Strong circumstantial evidence and initial investigations clearly suggest that Bhaiyuji Maharaj shot himself dead. We don't have a speck of doubt about it," Deputy Inspector General of Police H C Mishra told reporters in Indore.

He said it was being probed why he decided to end his life. Meanwhile, Bhaiyu Maharaj's disciples, who were in the city, to pay their last respects demanded a CBI probe into his death, alleging that he had been killed. The Congress party has already sought a CBI probe into the incident.

"Initial investigation has suggested that Bhaiyuji was under stress due to the family discord. We are investigating the case and have not drawn a conclusion yet," the DIG said. He said the revolver used in the incident has been sent for test. Mishra said they are investigating in whose name the licence for the weapon had been issued. "His family members have told the police that the licence was issued in the name of Bhaiyuji," he said. He said that in his "suicide note", Bhaiyuji wrote that he was taking the step due to stress.

Talking to PTI, Additional Director General of Police (ADG), Indore Range, Ajay Sharma said, "Domestic discord has come to light during the initial investigation into Bhaiyyu Maharaj's suicide, but we are conducting a detailed probe from other angles also." "We will not jump to any conclusion in a haste," he added. Sharma said a notepad was found in Bhaiyyu Maharaj's room in which he had purportedly written, "Somebody should be there to handle duties of family, I am leaving, too much stressed out, fed up."

The spiritual guru's family members claimed that it was his own handwriting, but the police will verify it by taking help of experts, the official said. The second page of the purported suicide note which went viral on social media says, "My all powers of finance, properties, bank accounts, all powers of signing authorities will be Vinayak because I'm having trust in Vinayak. I'm writing this thing without pressure (sic)."

Another official said the police have seized the CCTV footage, the revolver that Maharaj had allegedly used to shoot himself, his mobile phone and other gadgets from his house, located on the bypass road, where the incident took place.

Bhaiyuji Maharaj's first wife died after suffering a heart attack in 2015. He later married Dr Ayushi Sharma, a native of Shivpuri, in 2017. He has a daughter from his first wife.

Reacting to a viral CCTV footage dated 11 June, in which Bhaiyyu Maharaj is purportedly seen sitting with a woman in a local restaurant, the DIG said it has nothing to do with the 'suicide' according to investigations. "He had gone there to facilitate the admission of his follower's kin into an educational institute," Mishra added.

A disciple from Jalgaon in Maharashtra, Sambhaji Deshmukh, said the guru was "not a coward and could never take a step like suicide". "We suspect that he was killed under some conspiracy and demand a CBI probe into the incident," Deshmukh said.

The Maharaj was very popular in Maharashtra and Madhya Pradesh because of his spiritual and social works. He enjoyed a large following among politicians and film stars. He was one of the five Hindu religious leaders to whom the Shivraj Singh government in Madhya Pradesh had granted Minister of State (MoS) rank in April. However, Maharaj had refused to accept it, saying "a post holds no importance for a saint".