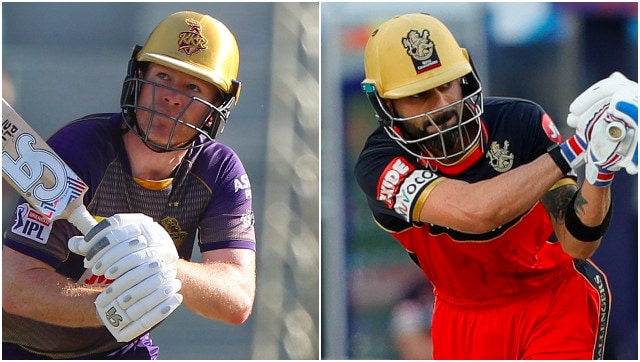 Well that finished a lot quicker than expected!

RCB bounce back from their loss at the hands of KXIP with a crushing eight-wicket win over KKR to move ahead of MI on the IPL points table, level on points with the leaders DC (14). With seven wins from 10 games, the Royal Challengers are certainly one of the teams to beat this season, and their fans certainly will have higher hopes than ever of their team finally ending the trophy jinx. Kolkata are not out of this yet, and remain at the fourth spot with five wins and as many losses, but will have a number of concerns going into their next game, the primary of which is their batting unit.

On that note, it’s time for us to close our coverage of Match 39 of the Indian Premier League 2020. See you all tomorrow.

Man of the Match, Mohammed Siraj: Really glad that Virat handed me the new ball. Just as we stepped onto the field, Kohli asked me to get ready. I have worked hard on my bowling. The ball that dismissed Nitish Rana was the best for me. The team environment’s really good, everyone’s getting into the act.

Virat Kohli, RCB captain: (Late decision to give Siraj the new ball?) It was to be honest. I was thinking of Washi. The surface looked drier, and it was a good toss to lose. It looked like it had a bit of sheen as soon as the lights came on. Thought of letting him (Siraj) set the tone. The management this time around has been able to create a culture of proper planning this time around. We have a Plan A, a Plan B, and that’s why it’s looking good. I don’t think a lot of people believe in RCB, but I do and the guys in the change room do, and that’s all that matters. You can have the best players in the world, but if you don’t have the belief, then you won’t see the results. (On Morris) He’s loving the responsibility, and he’s someone who loves to take the leadership role in the team. Never loses belief, and that’s contagious.

KKR captain Eoin Morgan: Being four or five down as early as we were is disappointing. RCB bowled well, but we should have countered that better. Ultimately, we didn’t have many runs on the board. With the dew in, we should have batted second.  Hopefully, Narine and Russell will be available for the next few games.

RCB register a comprehensive eight-wicket win over KKR to move ahead of MI to the second spot on the points table! Kohli collects the winning run with 39 balls left in the chase, which gives his side a massive boost to their net run-rate!

Kohli collects a brace off the first delivery of the 14th over, and then finishes with with a single towards third man two balls later to remain unbeaten on 18, with Gurkeerat batting on 21 at the other end.

Kohli smacks a length ball from Ferguson towards the midwicket fence off the first delivery to get RCB within touching distance of the finish line. Ferguson, however, gives away just one off the remaining deliveries to finish with 1/17 from his quota — a quality performance that unfortunately few will remember.

FOUR! RCB just a hit away from victory now, as Kohli smacks this towards the midwicket fence off Ferguson! RCB 81/2

Gurkeerat decides to accelerate in this over, collecting back-to-back boundaries off Chakravarthy, who bowls out his quota to finish wicketless for 28 runs. Single off the last two balls, with Kohli retaining the strike for the following over. RCB need just 8 off 48 balls.

FOUR! Gurkeerat gets down on one knee and slog-sweeps towards the square-leg fence to make it back-to-back boundaries off Chakravarthy! RCB 75/2

FOUR! Gurkeerat edges the ball wide of the keeper, the ball then running away to the vacant third man fence. RCB 71/2

RCB register a comprehensive eight-wicket win over KKR to move ahead of MI to the second spot on the points table! Kohli collects the winning run with 39 balls left in the chase, which gives his side a massive boost to their net run-rate!

Kohli collects a brace off the first delivery of the 14th over, and then finishes with with a single towards third man two balls later to remain unbeaten on 18, with Gurkeerat batting on 21 at the other end.

OUT! And now Padikkal departs for an attacking 25, getting involved in a mix-up with partner Gurkeerat! Kohli sure doesn't look the happiest as he walks out to bat. RCB 46/2

OUT! Did Morgan miss a trick by not introducing Ferguson earlier in the innings! The Black Caps pacer gets the ball to angle rather sharply into the batsman, getting the outside edge that results in the simplest of chances for Karthik. Finch's innings comes to an end! RCB 46/1

OUT! Big wicket. Morgan is back in the hut. Went for the sweep again but handed a simple catch to Gurkeerat at mid-wicket. The party is over! Morgan c Gurkeerat Singh b Washington Sundar 30(34)

OUT! Chahal tosses it up, it was a googly too. It traps Karthik LBW and KKR lose their fifth wicket. RCB were right in their decision to review it. KKR are in serious trouble here.

OUT! Banton departs. Siraj gets his third wicket, he’s on fire. Good length delivery, a hint of away movement and it takes the outside edge of Banton’s bat. Tom Banton c de Villiers b Siraj 10(8)

OUT! Shubman Gill departs. He mistimes the pull shot and, in the end, it was a simple catch for Morris in the ring. What a start for RCB! Shubman Gill c Chris Morris b Navdeep Saini 1(6)

OUT! And now Nitish Rana departs. What an inswinger to the left-hander. Just a hint of swing and that was enough to breach Nitish’s defence. Siraj justifying his spot in playing XI here. Nitish Rana b Siraj 0(1)

TOSS UPDATE: KKR have won the toss and they will bat first.

IPL 2020 LIVE SCORE, Kolkata Knight Riders vs Royal Challengers Bangalore latest updates: RCB register a comprehensive eight-wicket win over KKR to move ahead of MI to the second spot on the points table! Kohli collects the winning run with 39 balls left in the chase, which gives his side a massive boost to their net run-rate!

KKR would look to strengthen their place in the top four when they take on RCB. They were involved in a thrilling tie against Sunrisers Hyderabad which they won in the Super Over in their last match. After two losses, against RCB and MI, it would have been a relief to get back to winning ways.

KKR would be happy that their top order finally clicked in unison. Shubman Gill, Rahul Tripathi and Nitish Rana all got starts and they would be expected to convert them into big ones going forward. The one concern for them is Andre Russell's batting form, the West Indies all-rounder hasn't clicked. He suffered an injury in the last game and KKR would hope that he is fit in time for the game. The move to bring Lockie Ferguson worked wonders for KKR. The Kiwi pacer ripped through the top and middle order and then bowled a brilliant Super Over to win it for KKR. He will again be a big threat for RCB. KKR would expect much more from Pat Cummins' wickets column. It will be fascinating to watch the Kohli/De Villiers vs Ferguson/Cummins battle.

RCB too got back to winning ways after the defeat to KXIP with a thumping win over RR. The two main architects of their win were Chris Morris and AB de Villiers. Morris has been brilliant with the new ball and at the death while De Villiers has been batting on an altogether different plane. KKR bowlers will need to up their game big time in order to stop the De Villiers force. RCB might need to revisit their batting theme though and not rely too much on ABD. They have been too slow in the middle overs and leave it late for De Villiers to pull them off.

These two teams met earlier in the tournament at Sharjah and witnessed a De Villiers masterclass of 73 off 33 balls. KKR succumbed to 112/9 in chase of an over-par 195.

Both the teams would be looking to strengthen their position in the top four and coming into the match on the back of wins, we can expect another cracker.

Here's all you need to know about the KKR vs RCB match in Abu Dhabi:

When is the 39th match of the IPL between KKR and RCB?

Where will the KKR vs RCB match be played?

The match will be played at the Sheikh Zayed Stadium, Abu Dhabi.

What time does the KKR and RCB match start?

Which TV channels will broadcast the KKR and RCB match?

All the IPL matches will be shown live on Star Sports India channels and games can also be streamed live on Disney + Hotstar. You can follow the live blog and updates on www.Firstpost.com