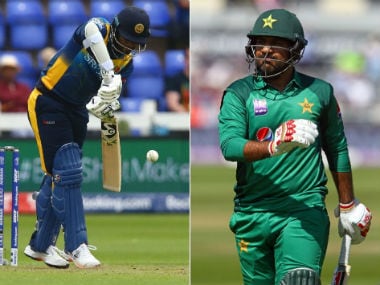 After such a long wait, the umpires have called off the match without a ball bowled. Feel for the fans that turned to the stadium, but that's how it goes. The incessant rain till 2 pm in Bristol affected the outfield and despite the best efforts of the super soppers and groundsmen they couldn't get the field fit to play some cricket. Pakistan and Sri Lanka will share a point each, don't know which team will be happier of the two. With that we come to an end to our weather coverage. Lots of cricket coming over the weekend, first England take on Bangladesh in Cardiff at 3pm IST and later it is Afghanistan, who will be up against New Zealand in Taunton. Do tune in for that.

The match has been called off. The match referee Andy Pycroft along with the three umpires have decided that the pitch is too wet to have a game on it. Both teams get one point each and for the first time in World Cup history, Sri Lanka have avoided defeat against Pakistan.

The match has been called off without a ball bowled.

Pakistan and Sri Lanka will share a point each

Concerns still over a particular area on the ground. We might have an update soon...

So that one patch on the outfield is concerning the umpires. They are clearly unhappy with it. We have bright sunshine now but this game could still get called off. 45min to go before cut-off time and covers still on square. #CWC19 #PakvSL pic.twitter.com/AFgVTfQ8Qe

Just look at the passion of these Pakistan fans!

They're not letting the rain dampen their spirits 👍 #WeHaveWeWill #CWC19 pic.twitter.com/Zas9XeGpF7

With the rain clearing up, the main concern for the officials is wet the outfield and more importantly the square.

There has been steady rain throughout the morning and early afternoon till about 2pm local time, the super soopers have been put to task as well.

The inspection is done and dusted. Still nothing substantial from the umpires. Apparently, there will be another inspection at 15.15 local time and a final call is expected at that time.

We will be having another inspection at 19:45 IST

Another inspection will be taking place at 3:15.

The match has been called off without a ball bowled.

Pakistan and Sri Lanka will share a point each

With the rain clearing up, the main concern for the officials is wet the outfield and more importantly the square.

There has been steady rain throughout the morning and early afternoon till about 2pm local time, the super soopers have been put to task as well.

The inspection is done and dusted. Still nothing substantial from the umpires. Apparently, there will be another inspection at 15.15 local time and a final call is expected at that time.

Looks like we might get lucky. The rain has stopped and currently the umpires are out there to inspect the field of play.

Some positive weather update from Bristol

The weather prediction is not good for the rest of the day. So this could be a washout. Sri Lankans wouldn’t be complaining. These well could be the last points they are earning in this World Cup unless there is another washout.

Still pouring down there. The official time to call off the game is 14.30 BST. Still couple of hours left for that but as per the latest update I have got from the ground, the organisers do not expect the match to take place today.

Currently we are approaching the 11 am mark in Bristol and yet there's no signs of improvement and according to Bristol Post it is likely to get worse the MeT office forecast shows a 90 per cent chance of heavy rain from 8am to 2pm, with the chance rising to 95 per cent at times.

Things do improve briefly in the afternoon, with light rain showers from 3pm to 4pm.

There's then a 60% chance of heavy showers from 5pm onwards.

For a 20-over fixture, the match needs to start by 16.15 local time. And according to the groundsmen, they need an hour and so to make the field of play ready for action. So, the rain must stop by 15.00-15.15 local time.

Seems like we are going to have a fair bit of delay!

Pakistan vs Sri Lanka, LIVE Score, ICC Cricket World Cup 2019, Latest Updates: The match between the two Asian giants has been abandoned and as a result, Pakistan and Sri Lanka share a point each.

The notoriously unpredictable Pakistan side held their nerve to beat the hosts by 14 runs at Trent Bridge on Monday, just three days after crashing to a seven-wicket defeat against the West Indies at the same venue.

That ended a sequence of 11 consecutive defeats in completed one-day internationals.

Arthur praised his team's resolve after a "shocking" defeat in their tournament opener.

"It was just so good to see us go out and play with the belief and intensity that we had spoken about," Arthur told AFP.

"When we put all three disciplines together we know we can beat anybody. We now need to stay consistent and ruthless."

Meanwhile, on Tuesday, Sri Lanka beat Afghanistan in a rain-shortened match, also in Cardiff, to breathe life into their campaign.

Sri Lankan coach Chandika Hathurusingha said he had told his batsmen to up their game.

"I don't give pep talks. I give an honest talk, that's all.

"I tell them what has to be done. They have to come and perform," said Hathurusingha, who praised opener Kusal Perera for his 78-run knock, which helped Sri Lanka reach 201 against Afghanistan.

"He's an amazing player," said Hathurusingha. "We have given him the full license to bat the way he wants to bat. We know that when he's come up, most of the time it's match-winning."

But one factor outside anybody's control is the weather, with persistent rain forecast for Bristol on Friday.

Here's all you need to know about when and where to watch Pakistan vs Sri Lanka match:

When will Pakistan vs Sri Lanka match take place?

Pakistan vs Sri Lanka match will take place on 7 June, 2019.

Where will Pakistan vs Sri Lanka match be played?

Pakistan vs Sri Lanka match will be played at County Ground in Bristol.

What time will Pakistan vs Sri Lanka match begin?

Pakistan vs Sri Lanka match will begin at 3.00 pm IST, with toss scheduled at 2:30 pm IST.

Which TV channels will broadcast the French Open quarter-finals?

The match will be telecast on the Star Sports network in both standard as well as HD format, with live streaming on Hotstar. You can also catch the live scores and updates on Firstpost.com.