The big-hitting Chris Gayle has said he would "love to carry on as long as possible" in competitive cricket as he is still passionate about the game.

Dhaka: The big-hitting Chris Gayle has said he would "love to carry on as long as possible" in competitive cricket as he is still passionate about the game. 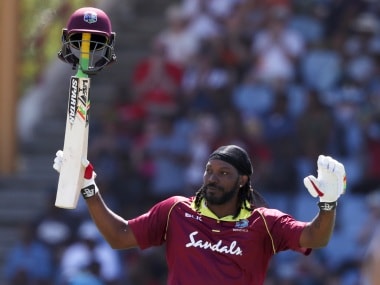 Having taken a break from the game towards the end of 2019, the Jamaican is back in action with the Chattogram Challengers in the Bangladesh Premier League.

"A lot of people still want (to) see Chris Gayle out there in the middle. I still have that love for the game and that passion for the game as well. And I would love to carry on as long as possible," Gayle said during a media interaction.

The 40-year-old swashbuckler added, "Even in franchise cricket I am still playing a few games here and there around the globe because I still feel I have a lot to offer.

"The body is feeling good. And I am sure I am getting younger as days go on."

The veteran opener was not part of the West Indies team for the India tour last December, having opted out to use the time to "reflect" on his future in international cricket.

When asked how long he would like to continue, Gayle, on a lighter note, said, "Forty-five is a good number. Yeah, we can target 45. Let's target 45, that's a good number."

Gayle last played a Test match in 2014, and is not playing the ongoing home series against Ireland, but remains part of their T20 plans in a T20 World Cup year.