Prabhu Deva's iconic number 'Muqabla Muqabla' is the latest song to get a 2019 makeover. The makers of Street Dancer 3D have unveiled the first song from the movie, a rehashed version of the 1994 hit song from the film Humse Hai Muqabla.

The song features Prabhu, Varun Dhawan, and Shraddha Kapoor locking and popping with ease, as they sway to the classic dance steps from the songs. There are many other interesting formations and rain dance sequences in the rehashed song.

While the original song was composed by AR Rahman, the latest version has been belted out by Yash Narvekar and Parampara Thakur, and written and composed by Tanishk Bagchi.

The god brings back the beat @PDdancing #muqabla @remodsouza thank u for letting me be a part of this even thought it for Just a bit lol https://t.co/Dq8ltPH0tp 🎺🎩⚡️💥 #StreetDancer3D. This song would never pe possible without our maestro of music @arrahman.

Choreographer-turned-director Remo D'Souza admits the song was included in the film as a tribute to Prabhu Deva. He says in a Mid-Day interview, "Since Prabhu sir was a part of the film, we wanted a song dedicated to him. Bhushan ji (Kumar, producer) told me that he had the rights to the 'Muqabla' song. So I thought it would be the best way to pay our tribute to the man who has been instrumental in changing the dancing scene in India."

The trailer, released on 18 December, portrays Dhawan as an Indian dancer and Shraddha Kapoor as a performer from Pakistan. Shakti Mohan, Aparkshakti Khurana, and Nora Fatehi feature in supporting roles.

While Street Dancer 3D has been dubbed "India's biggest dance film," D'Souza had clarified the movie is unrelated to his other directorial, the ABCD franchise. He said to Mid-Day, "This is completely different from the earlier franchise. Although we are exploring different forms of dance, including jazz and contemporary, when these dance forms are incorporated on the street, they become completely different."

Sachin-Jigar have composed the music and background score of the film, while Kruti Mahesh, Rahul Shetty (RnP), and Tashan Muir are the choreographers. 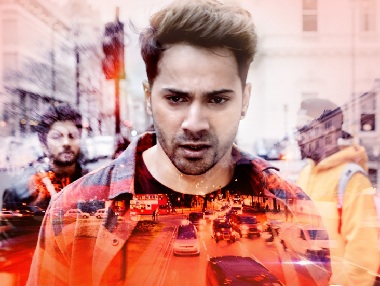