A celebration of Indian cinema in its 100th year, Bombay Talkies is an anthology of four short films by four of Bollywood’s most relevant directors today: Karan Johar, Dibakar Banerjee, Zoya Akhtar and Anurag Kashyap. The release of its intriguing theatrical trailer a couple of months ago set our expectations high, and this can be a dangerous thing. Because how often do the movies in our industry live up to the pre-release hype, really? This one worked. Beautifully.

Johar is up first with Ajeeb Dastaan Hai Yeh. Considering his widespread commercial success and the city-slick melodrama that his movies are known for, people balked at his inclusion in this bunch of directors. They braced themselves for at least one sure-fire letdown. But it isn’t one. Set in Mumbai, it explores the relationship between a man (Randeep Hooda), his wife (Rani Mukerji), and her colleague (Saqib Saleem). To even hint at any other details of this 30-minute quickie would be to ruin the story for you, so I won’t. Rest assured, it doesn't play out in trademark Johar style. 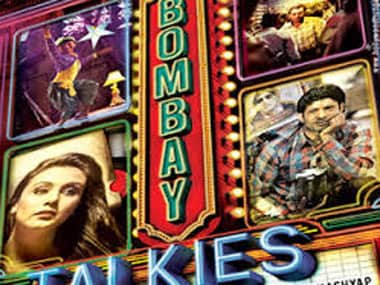 The beauty of Bombay Talkies lies in the subtlety of each of its films.

Dibakar Banerjee is next with Star, based on a short story by Satyajit Ray called Patol Babu, Film Star. It introduces us to a jobless husband and father (Nawazuddin Siddiqui), trying his damnedest to find work and his place in the world, and equally importantly, to win the affections of his sick daughter, often with stories of movie stars he’s met or heard about. Deodorant-doused, prayed for (by his wife) and hopeful, he sets out one morning to get a job as a watchman. The position’s already been filled, but what with everything happening for a reason and all, he gets picked from a crowd to be an extra in a Ranbir Kapoor movie on his way home. What happens next and how, whether this moment of fame will change his life, you’ll have to see for yourselves. All I can say is: spot the emu. And that’s not even code for anything.

Zoya Akhtar’s Sheila ki Jawaani is a darling story of a 12-year-old boy (Naman Jain) who is bullied into testosterone-driven activities and hobbies by his father (Ranvir Shorey); only he’d rather spend his time perfecting the shimmy. Of all the things his peers want to be when they grow up, all this guy wants is to dance. Besotted by his idol Katrina Kaif, Jain’s character is ridiculously endearing. While the focus is on his dream and how he tries to work out a way to realise it, the film also explores the gentle relationship between the boy and his supportive older sister.

Finally, there’s Murabba, an ode to the master of Indian cinema, Amitabh Bachchan by the master of indie cinema, Anurag Kashyap. On the face of it, it’s about protagonist Vijay (Vineet Kumar Singh), who is on a mission to get Amitabh Bachchan to take a bite of the last bit of murabba in a once-full jar, and bring it back for his dying father to eat. This seemingly asinine request comes from his father’s strong belief that the only reason his own dying father lived six years longer than anyone expected him to was because he ate honey from the same jar that his idol Dilip Kumar once did. Behind the story of a man who travels to Mumbai from Allahabad to fulfill this request is the story of the everyman incurably enthralled by the movies and his favourite film stars. If you're from Mumbai, you’re already familiar with the scene outside both of Bachchan’s homes. If not, you’ve still probably heard stories of the crowd that throngs the area, hoping to catch a glimpse of the Angry Young Man, some waiting days, even weeks, for that rare chance to actually meet him in person. In this short, there’s all that, topped with a lonely piece of murabba.

To compare the four stories would be silly because they are all personal tributes to Indian cinema and its role in our lives across generations. That’s all they really have in common, beyond the remarkable performance of every one of the actors.

The beauty of Bombay Talkies lies in the subtlety of each of its films. The four stories make you laugh, they make you tear up, they make you want to hang out with Naman Jain and Sadashiv Amrapurkar (he plays Siddiqui’s dead father in Star).

The combination will remind you why you love the movies and why you still return to the theatre week after week, wide-eyed and hopeful in spite of the tripe we too often have to endure. If you must fault Bombay Talkies for something, perhaps one could complain that for a 100-year celebration, it isn’t weighty enough, but that’s about all. Watch it? Yes, please. Right till the very end too, for a curtain call of your favourite film stars through the century.