I Am Not A Witch review: Rungano Nyoni's film delivers scathing comment on prejudice in Zambia

I am not a Witch is a poignant, if often inexplicable and exasperating, debut from Zambian-born Welsh director Rungano Nyoni. Equally strange and alluring, the movie tells the story of the nine-year-old orphan girl, Shula, played by Maggie Mulubwa, who is identified as a witch by the local community and banished to a government-run camp.

Through her telling of the story, Nyoni delivers a scathing comment on dogma, prejudice and corruption in Zambia. Shula’s farcical tale is told in a deadpan style, with many events remaining unexplained. But the debut is strikingly original and easy to admire, especially from a distance. 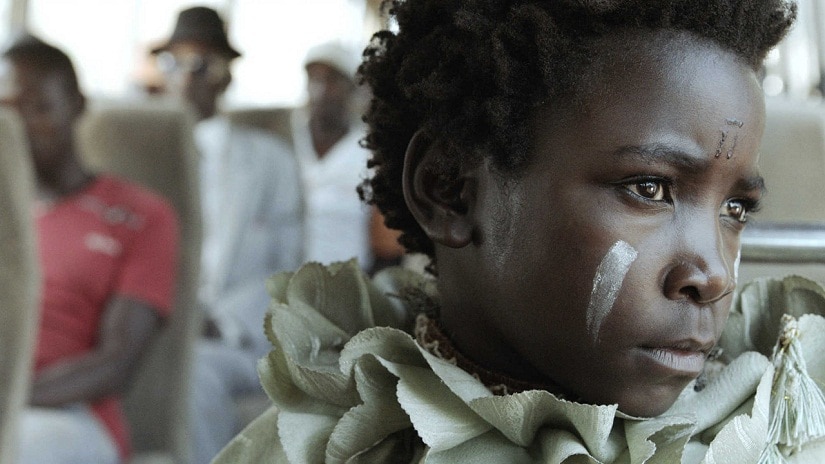 Maggie Mulubwa in a still from I Am Not A Witch. YouTube

The movie begins with a shot of a tourist van as it goes towards a witch camp to the loud, jarring score of Vivaldi. At the camp, the tourists see witches with white paint on their faces. But even more bizarre is the white ribbon running from their backs to a spindle which is to “keep them from flying away”. The witches seem to be a local attraction staged by humans for humans.

When a young woman drawing water from the river slips and falls, she blames Shula for the event. During many of these early scenes, Mulubwa does not have many dialogues – she neither denies nor accepts the allegation that she is a witch; she is probably too terrified.

The police officer “investigating” the allegation makes a call to Tembo (John Tembo), a government official, who seizes the opportunity and puts the girl in a witch camp. While the ribbon, a symbol for slavery and superstition, is attached to Shula, she is told that if she cuts it, she would instantly be turned into a goat. She is given a false choice – to be a goat or a witch – and left alone for the night. Predictably, Shula agrees to become a witch the next morning.

What follows is the farce: Shula is paraded in front of the media by the opportunistic government official and a line of eggs is released in her name. She is, in a memorable sequence, asked to identify thieves, a task which she is so obviously ill-equipped to do. At the camp, Shula is embraced by the older women, who take her under their wing and shower her with unconditional love and affection.

Mulubwa’s Shula is a not your ordinary nine-year-old. She is not especially expressive, charming, playful or mischievous, which makes her harder to like. Through much of the movie, she is shy, quiet and reserved. What she makes of her life and the way it is so shockingly hijacked by others remains a mystery. Mulubwa’s painstaking portrayal suggests that the child has turned indifferent to suffering because she can do little to alleviate it. Nyoni’s direction asks us to assess the child’s plight, not love the character itself.

When Tempo is introduced in the movie, he is in the bathtub and we see only his back for several seconds. The sequence is quite comical and Tempo is shown as a bumbling clown whose erroneous ways and beliefs affect Shula adversely.

In another impressive sequence, Shula locks herself in a van, and refuses to admit Tempo into it. This is a rare act of defiance from Shula, who in the most of the scenes, seems to falls in line with the schemes plotted with her at the centre.

There are many sequences in which the witches are shown as being objects of hatred for the community at large. Even Tempo’s wife is a witch, which prevents her from even doing simple acts like shopping.

There is a smattering of English in the movie, mostly spoken by Tembo, who asks the ‘witches’ not to become 'allergic to comfort.' In his eyes, the government’s role in exploiting the witches is justified. But the women are often seen in the movie doing backbreaking work in a quarry or field. The ignorance to the plight of the witches is appalling, but we are not asked to sympathise. Nyoni spent time in a real-life camp before coming up with the script. She does not intellectualise the problem and is content to state her case; we are allowed to draw our own conclusion.

The cinematography by David Gallego is vital to the elevation of the movie. The various shots of the ribbons attached to the witches are a surreal touch. His camera work is flamboyant at command and highly stylistic.

The movie, which runs to 95 minutes, was screened at the Directors’ Fortnight at the Cannes Film Festival and is part of the International Competition section at the Jio MAMI 19th Mumbai Film Festival. In this section, the first time fiction and documentary features of directors are shown.