TUNIS (Reuters) - The Libyan National Army (LNA) of eastern military commander Khalifa Haftar said it had pulled back from some Tripoli frontlines on Wednesday, calling into question its ability to sustain a year-long offensive aimed at seizing the capital. The LNA had announced overnight it was withdrawing 2-3 km (1-2 miles) from all positions in the city as a humanitarian gesture, but its fighters remained at some frontlines in the city. 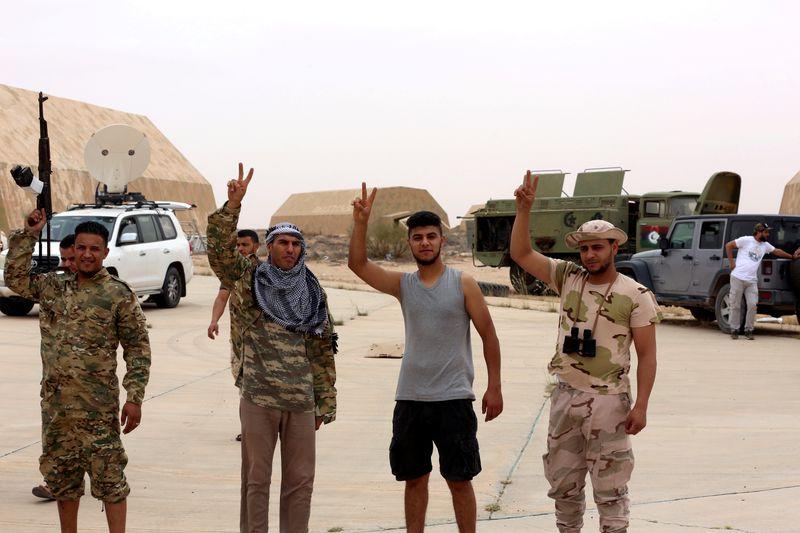 TUNIS (Reuters) - The Libyan National Army (LNA) of eastern military commander Khalifa Haftar said it had pulled back from some Tripoli frontlines on Wednesday, calling into question its ability to sustain a year-long offensive aimed at seizing the capital.

The LNA had announced overnight it was withdrawing 2-3 km (1-2 miles) from all positions in the city as a humanitarian gesture, but its fighters remained at some frontlines in the city.

Libya has been split since 2014 between rival factions based in the capital Tripoli and in the east, in a sometimes chaotic war that has drawn in outside powers and a flood of foreign arms and mercenaries. Haftar, the most powerful commander in the east, has tried since last year to capture Tripoli.

The decision to withdraw follows a series of military setbacks that underscore the shifting dynamics of the conflict since Turkey intervened in January to help the U.N.-recognised Government of National Accord (GNA) stave off Haftar's assault.

Turkey's backing is most visible in the new balance of power in the air, with drones striking LNA forces repeatedly and a GNA spokesman saying that six Russian-supplied air defence systems had been destroyed on Wednesday alone.

Backed by the United Arab Emirates, Russia and Egypt, Haftar's LNA still holds all of eastern Libya and much of the south, including most oil facilities, but its presence in the northwest, where Libya's population is concentrated, has come under intense pressure.

The GNA last month took a string of small towns linking Tripoli to the Tunisian border. On Monday it took Watiya, the LNA's only airbase near Tripoli and a big strategic prize. On Tuesday it took three small towns to the southwest.

On Wednesday morning, there were clashes at Asaba, south of Tripoli, while rockets were striking the LNA's most important stronghold in the region, the town of Tarhouna, an eyewitness said.

Last month GNA Interior Minister Fathi Bashagha said capturing Tarhouna would end Haftar's campaign to seize Tripoli but that the fighting in the capital was the priority.

Residential areas, hospitals and other civilian infrastructure in Tripoli have been bombarded frequently for months.

Addressing the Security Council on Tuesday, the U.N.'s acting Libya envoy warned of a new escalation in the conflict and urged pressure on countries backing the warring sides.

However, diplomatic efforts to negotiate a political settlement have made little headway, as more foreign fighters and weapons have poured in despite months of near stalemate.

On Tuesday and Wednesday, Haftar's supporters the UAE and Russia issued separate calls for a ceasefire and political solution. Previous ceasefires have been short lived and the GNA has accused the LNA and its allies of using truces to build up military supplies and prepare for new attacks.

At Watiya, the GNA seized what it says is a Russian-made Pantsir air defence system supplied to the LNA by the UAE. Majai said six more were destroyed on Wednesday. The LNA did not comment.

Turkish Defence Minister Hulusi Akar said on Wednesday that as a result of Turkish training and advice "the balance in Libya changed significantly".

(Reporting By Hani Amara in Istanbul, Ayman al-Warfali in Benghazi and Tuvan Gumrukcu in Ankara, Libya; Writing by Angus McDowall in Tunis; Editing by William Maclean and Peter Graff)