One of the largest natural strongholds of the Royal Bengal Tiger — the marshy mangrove ecosystem in the Sunderbans forest — is under threat from climate change. Along with the climate growing unfit for the mangrove forests to survive, the rising sea levels could potentially submerge 70 percent of the habitat in a few decades.

A team of researchers from Bangladesh and Australia made this bold new claim in a report published in the journal Science of the Total Environment.

The Sundarban forests, partly falling into India and partly in Bangladesh, make up the single-largest mangrove ecosystem still in existence. It spans a vast area of more than 6,000 sq km, and is the last stronghold of the Bengal tiger, which is a native to the swampy, marshy Sunderbans delta.

Currently, almost 70 percent of the delta is low-lying — within a metre of sea level. Rising water levels are a significant threat to low-lying areas, and the tiger habitats of Sundarbans are particularly vulnerable to it. Moreover, some of the other effects of climate change – changing weather patterns, heat waves and extreme weather events, most notably – are likely to have an even greater impact, according to the new study. The researchers used detailed simulation models for the two scenarios of climate change that were developed by the Intergovernmental Panel on Climate Change (IPCC), along with projected sea level rise in the region to arrive at an assessment about how sustainable the region is for its tigers.

"While this is preliminary analysis, we can conclude that the largest population of Bengal tigers is in an area where a combination of actors including climate change and human encroachment could both contribute to the decimation of habitats," William Laurence, co-author of the study from James Cook University, told IndiaSpend.

With both temperatures and sea levels on the rise, the amount of salinated seawater flowing into land can change the soil's composition, making it harder for some plants to grow. With choices of available food on the decline, Sunderbans' population of spotted-deer, the foremost prey of the Bengal tiger, will be affected severely as the leaves and trees they feed on gradually disappear. With natural resources on the decline, tigers are also more likely to stray into settlements with people, on the lookout for food. Tiger-human conflict is also predicted to increase in this scenario, according to the study. The mangroves at the heart of the Sundarbans, themselves, are critically endangered, as per the IUCN Red List. Mangroves are trees that are salt tolerant, with roots that submerged under water and act as a nursery and nest for marine life. These young ones eventually migrate to reefs, which many of these creatures call home for a significant period of their lives.

The collective ecosystem of mangroves, seagrass and corals are of huge importance to ocean health for many reasons —  they trap and produce food for marine life, protect coasts from the impact of storms, help filter out pollutants in run-off water from land, and make for habitats to turtles, seahorses, manatees, fish and foraging sea life like urchins and sea cucumbers.

As for the Bengal tigers, researchers believe the population could still survive in the region if conservation of tigers and the local ecosystem is made a priority. The study calls on the government of Bangladesh to make accommodations – designate larger areas for tiger conservation, make more corridors for tigers to move around safely, and remain vigilant about poaching and hunting in the area to avoid any further decline in their population.

While the study claims that tigers could be wiped out from the Sunderbans in 50 years, not all experts share the same opinion.

Sugata Hazra, an oceanographer at Jadavpur University, Kolkata says that she doesn’t subscribe to the same "doomsday view".

"When we conducted our 2016 study, we accounted for a 'sediment attrition rate', since mangroves are also building land in the area as they attract sediment," Hazra told Indiaspend. After they adjusted the sea level rise after sedimentation, the land loss was roughly 17 percent. 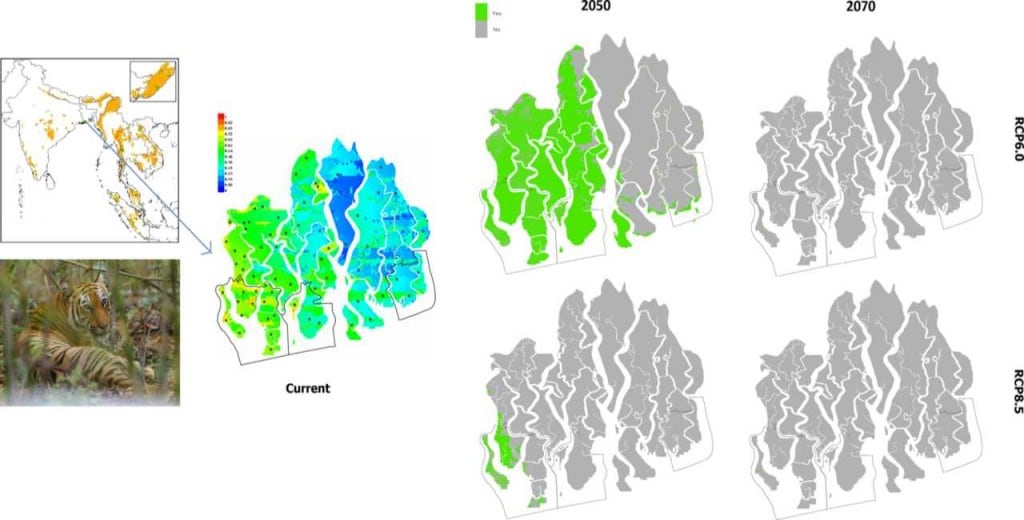 The Sunderbans Tiger Reserve was found to be home to at least 103 tigers in the 2013 census. Of its entire land area, around 40 percent – an area the size of Goa – falls under West Bengal. Some conservationists believe that this division of Sunderbans (as well its tiger population) between efforts from both, the Bangladeshi and Indian side, is a hindrance.

"Tigers can cross easily between India and Bangladesh so the tiger population is not a separate one; they live in a trans-national ecosystem," Hazra told Indiaspend. An approach with closer cooperation on sharing the forest resources, tiger habitat and upkeep of freshwater supply in the area is important, she adds.

But any big effort needs time, and there's one thing that the study and Professor Hazra are in agreement about: the fight against habitat loss in the Sunderbans needs to begin immediately. It could take 20 years or more for these efforts to even begin showing results, but there won't be a forest or tigers to save in 50 years if action isn't taken soon.