Wildlife Day: India's shores house a wealth of marine life that turn with the tide

Ecosystems at the shores are as diverse and as alive as we know forests to be.

In many ways, this time feels not too different from the half-a-dozen wildlife safaris I’ve been on. The familiar feeling of eagerness and excitement is something all three of my companions and I have in common. Except that there’s one big difference, we didn’t travel hundreds of kilometers to a faraway forest – this safari was on a beach, in the city, mere minutes from our homes.

I’m standing at the place where the land and sea meet – the intertidal zone. It’s an area that is partly submerged during the high tide and exposed when the water recedes in low tide. 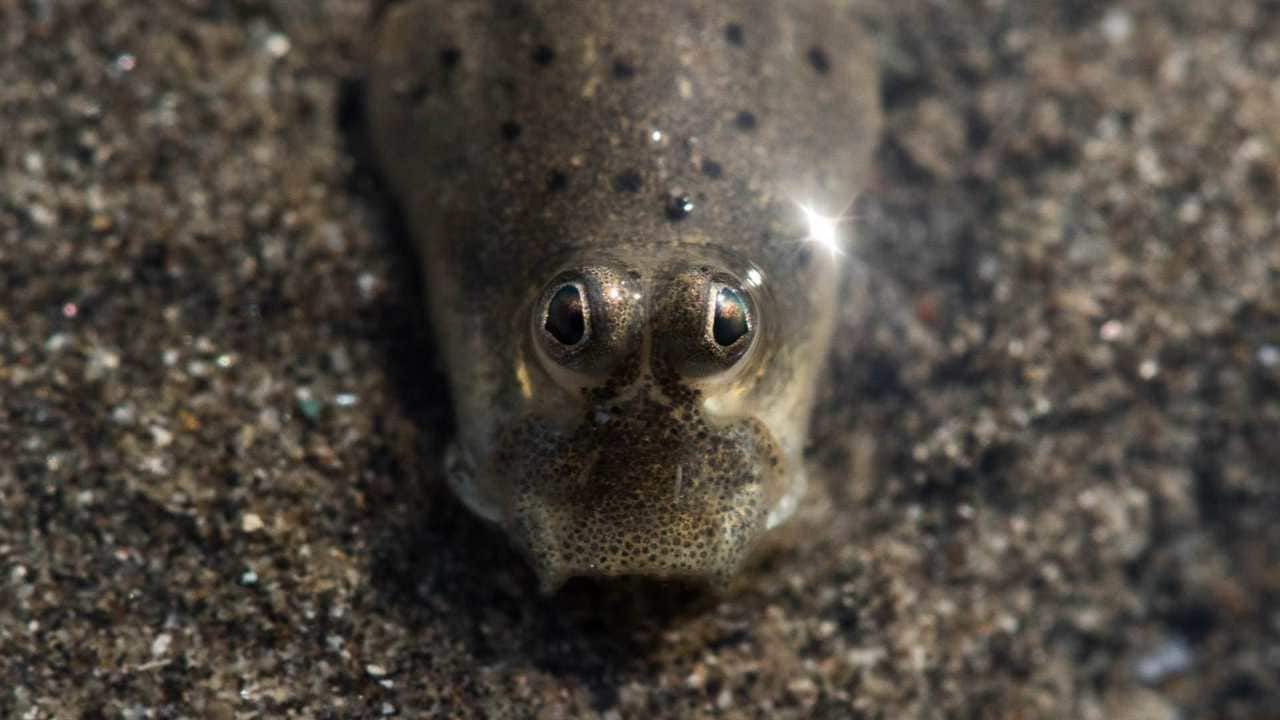 Mudskipper is an amphibious fish that lives in water and also spends a significant amount of its time (in daily life) out of water. Image credit: Shaunak Modi

The beach itself was far from a pristine and idyllic island beach – it was one of Mumbai’s busiest. A nice place for an evening stroll, a makeshift cricket stadium, a family picnic spot, a romantic and inexpensive place to snuggle. Beaches are so many different things to people, and not a day goes by without hundreds of people being merry in its sands and waters. And while it’s impossible to tell, most of them look blissfully unaware of how rich with wildlife the beach around them is. To thousands of creatures, this place is home. 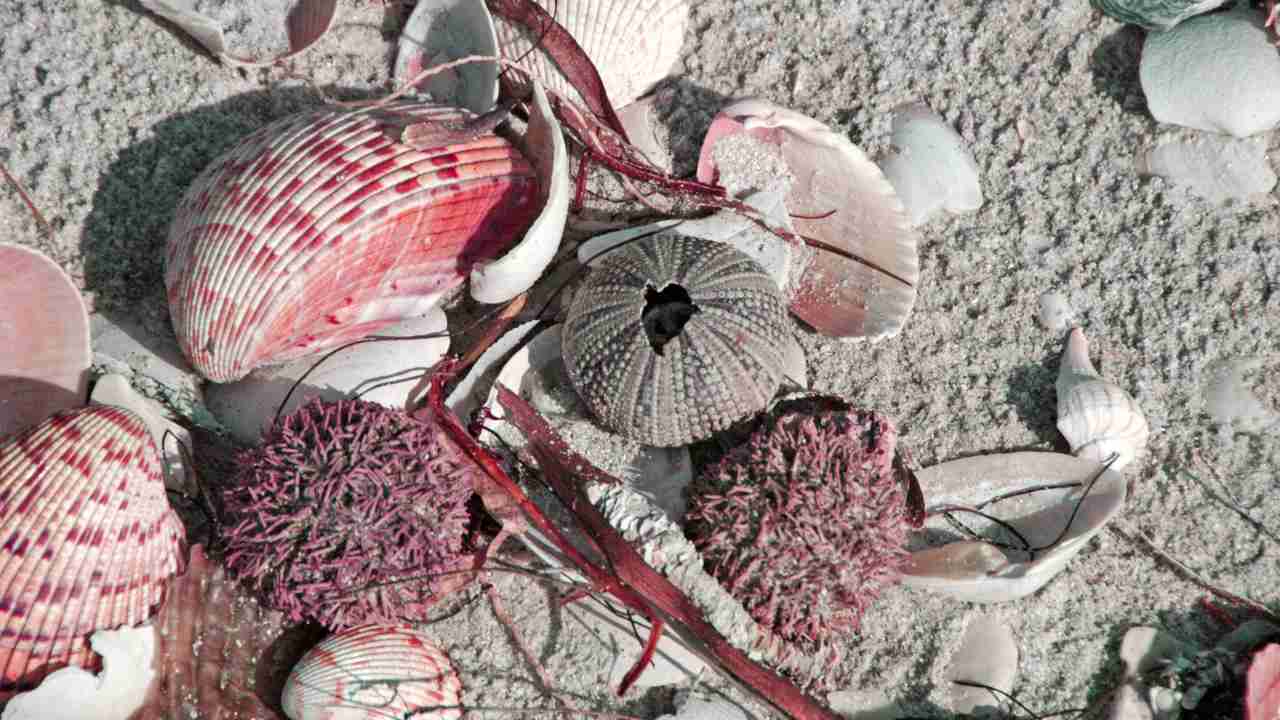 Mollusc shells & sea urchins that surface in the intertidal zone at a beach in southern tip of Florida. Image courtesy: Wikimedia Commons

Today is a spring tide day – either a new moon or full moon day when the tidal range is larger and the tide retreats farther than other days. The full moon just went by a few days ago, and a large area of the intertidal zone is bare and exposed for us to walk on and explore. As I look down at the moist sand, it strikes me how well-adapted animals on Mumbai’s shores are. They’re sharing their homes with people. Are they happy to? I’m not sure. But they make do. That’s the Mumbai way. Closer to the tideline, tiny hermit crabs cut across ripples left by the waves, making tiny tracks in the wet, firm sand. Crisscrossing them are squiggly lines made by a snail’s muscular foot. Following one of these squiggles led me to a Nassa mud snail (Nassarius sp.). These are very active scavengers, always moving, waving their long and restless siphons in search of their next carrion meal.

A few steps ahead, at the edge of a tiny pool of water, was a sea anemone. A closer look tells me that a tiny snail had climbed over it, triggering some of the anemone’s tentacles to wrap themselves around the poor fellow. How have anemones adapted to every part of the ocean? They’re found everywhere from the intertidal zone I’m standing on, to deep in the sea where species resembling Venus flytraps (Actinoscyphia aurelia) orient themselves to face the upwelling current, collecting food particles as they drift by. They come in a gamut of colours and while the ones on Mumbai’s shores are small, they can be anywhere from centimetres in diameter to over three feet across. Like gelatinous pink flowers in the sand, pearly sea anemones (Paracondylatis sp.) are close relatives of corals and jellyfish. These immobile animals bury their cylindrical bodies in loose watery sand and leave only their oral discs and tentacles around it above the surface. 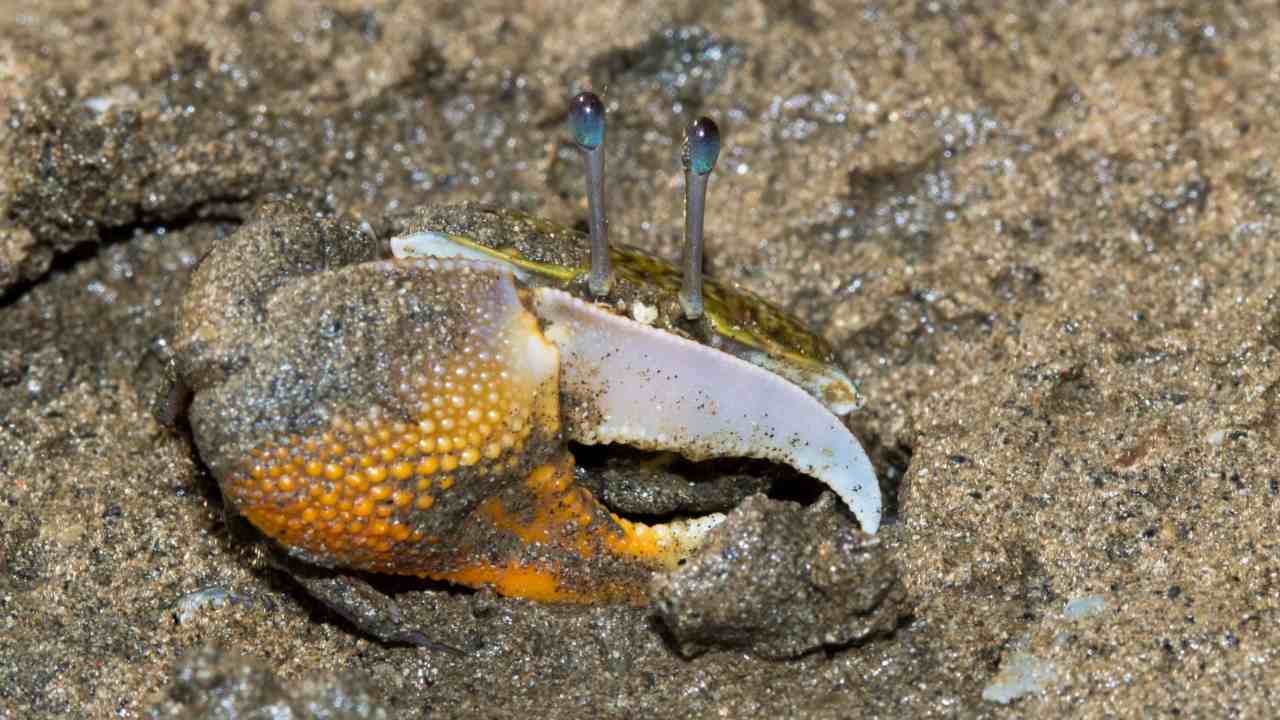 A shore has diverse habitats, with animals that had adapted to each one. Juhu’s, for instance, is a predominantly sandy shore, apart from a rocky area and a muddy patch. Each of these habitats has animals that have adapted to their uniquely harsh settings – conditions that are harsh in their temperatures, moisture, water salinity or predation from above and below. Pearly sea anemones need sand to bury their columns, fiddler crabs need mud to eat and make their burrow, sea sponges spread on rocks, while fish like gobies and blennies prefer deeper waters.

Walking along the water’s edge, I made my way towards the rocks farthest out. The sand turned course, mixed with rock churned by the waves. Suddenly, a drop of water hit my face. Looking down and around the entire patch I was standing in, I saw something I could only describe as the Fountains of Bellagio – a coordinated show with hundreds of jets of water flying in every direction – bivalves.

Bivalves are a kind of marine mollusc – of which some of the more commonly recognized cousins are mussels, clams and oysters. They have a two-part hinged shell with a soft-bodied animal inside. Bivalves prefer living buried under sand with only their siphon above the ground. They feed on nutrients from the water around them using their gills and expel water back outside with their siphons – unknowingly creating this wondrous show above ground.

I strolled the shores to the farthest end of the beach, where the landscape was entirely changed. The course sand now had small rocks strewn around, and large boulders jutting out of the water, making tidepools of different sizes. I was in the lower littoral – the area farthest from the shoreline that stays out of the water only for a short period when the tide is at its lowest. This area is teeming with life not found further up the shore like corals, sea stars and their cousins, brittle stars – all animals I never thought I’d discover in Mumbai. But here they are. The Sea star looked like it was riding a snail-like a horse, with a tip of one of its arms curled up, as if hailing the tide to come back in. Animals in this part of the shore aren’t well-adapted to staying out of water for long periods of time. Sea stars start desiccating when they’re out of water, and brittle stars hide inside crevices along the rocks. Corals safely tuck their tentacles into their skeleton while waiting out the low tide. 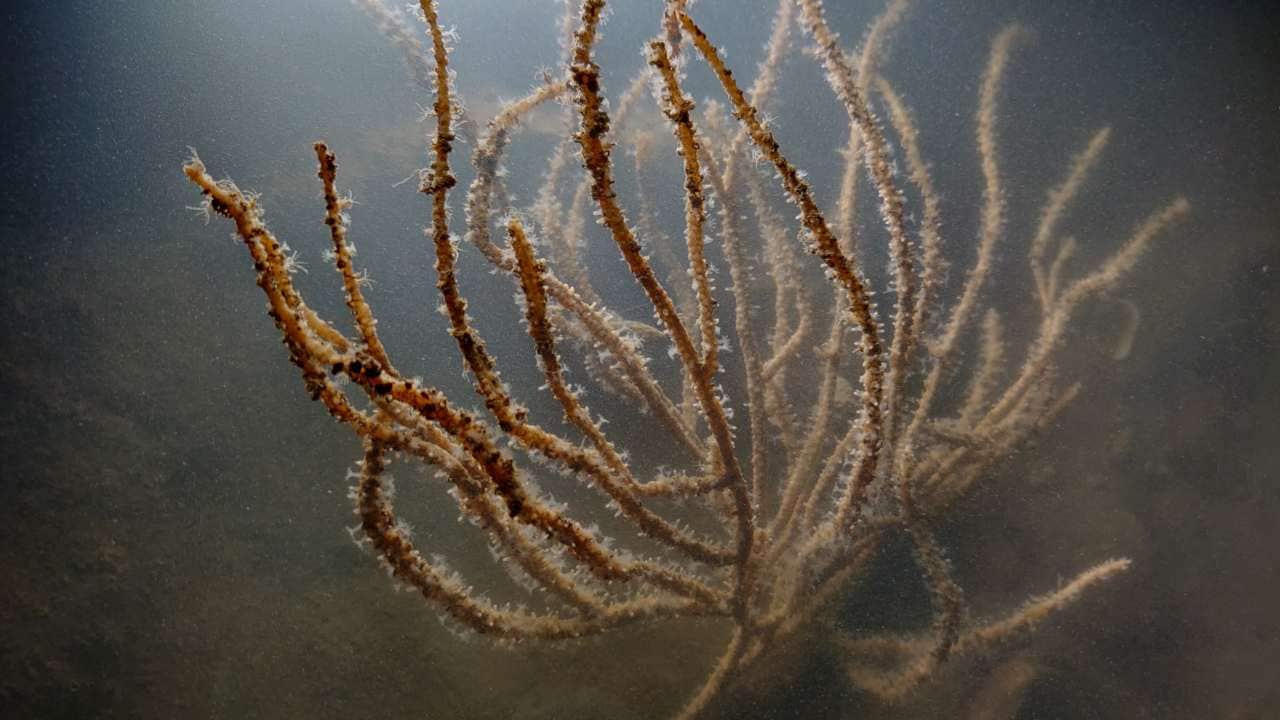 With the blink of an eye, the tide has turned – the sea was slowly reclaiming its shore. As I saw the rising water gently wash over the sea star, I knew it was time to go home, only to be back again soon enough. If there’s one thing you can depend on, it’s the turning of the tide. 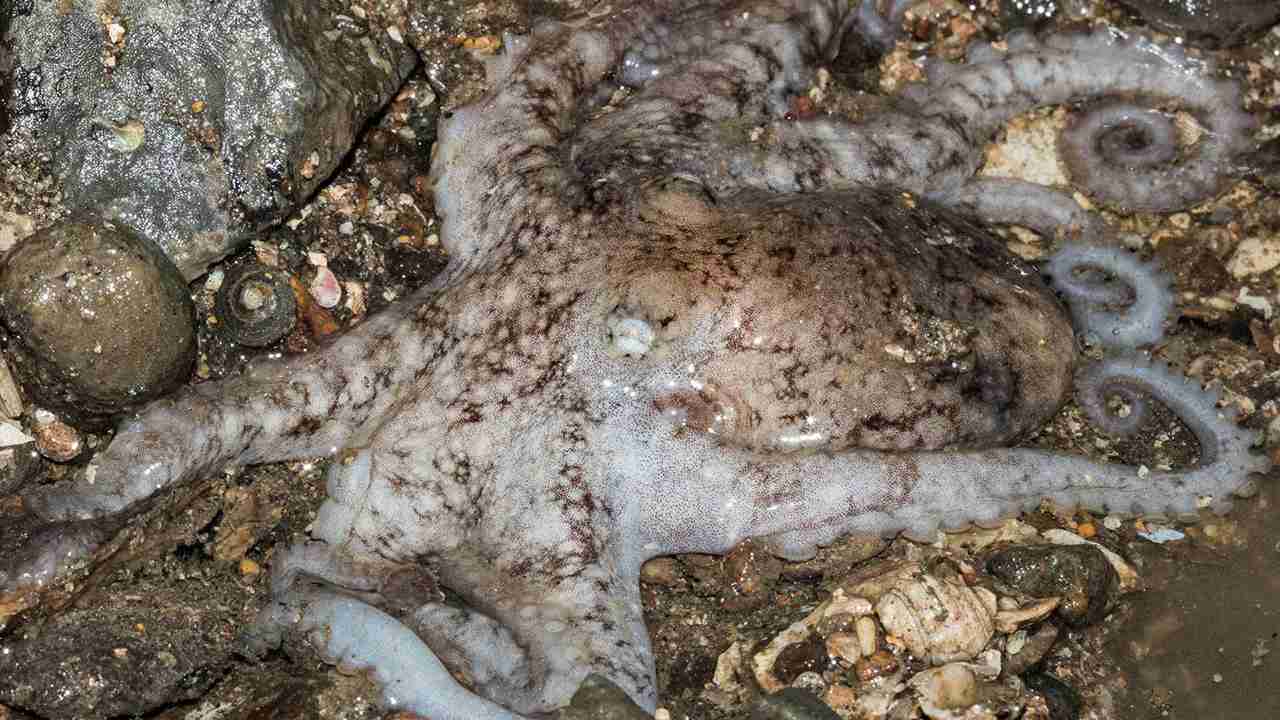 We choose pristine forests and exotic islands to look for wildlife. But fail to notice those we share our homes with. It’s not uncommon to see hundreds of soldier crabs move in unison as you walk past them or if you’re lucky, an octopus, hiding under a rock.

Mumbai’s shores are far from pristine, but despite everything we throw at them, these resilient animals still call it home.

Once you start looking at the shores as ecosystems, you notice they’re as diverse and as alive as forests are. There are predators, grazers, scavengers, and opportunists here on the shore too. All you need to do is look.

The author is part of the core team of Marine Life of Mumbai and interested in citizen science and intertidal ecology.