Chandrayaan 2 Landing: A step-by-step look at the Vikram lander's 47-day journey to the moon

There's plenty of action planned for the days between Chandrayaan 2 launch & the planned landing on 7 September.

With the spectacularly successful launch of ISRO's Chandrayaan 2 mission on 22 July, the three-part spacecraft carrying a lunar orbiter, lander, and rover destined for the moon's surface was launched into the Earth's Parking Orbit, a temporary orbit used during the launch of a satellite or spacecraft.

Surely there was a lot going on between the launch and the planned landing on 7 September. How was the journey for the Chandrayaan spacecraft?

Update: After successfully performing its second de-orbiting manoeuvre, Chandrayaan 2 is now heading for a powered descent on the lunar surface.

The Chandrayaan 2 composite spacecraft spent the next three weeks making larger and larger elliptical orbits of the moon. From a 170 x 40,400 km (its nearest x farthest distance from the Earth) elliptical orbit, the spacecraft performed five "orbit-raising" shifts to higher orbits — bringing it closer to the moon with each subsequent one. These five manoeuvres required "Earth burns" of the spacecraft's onboard engines, with each thrust moving it closer to the moon's gravity. 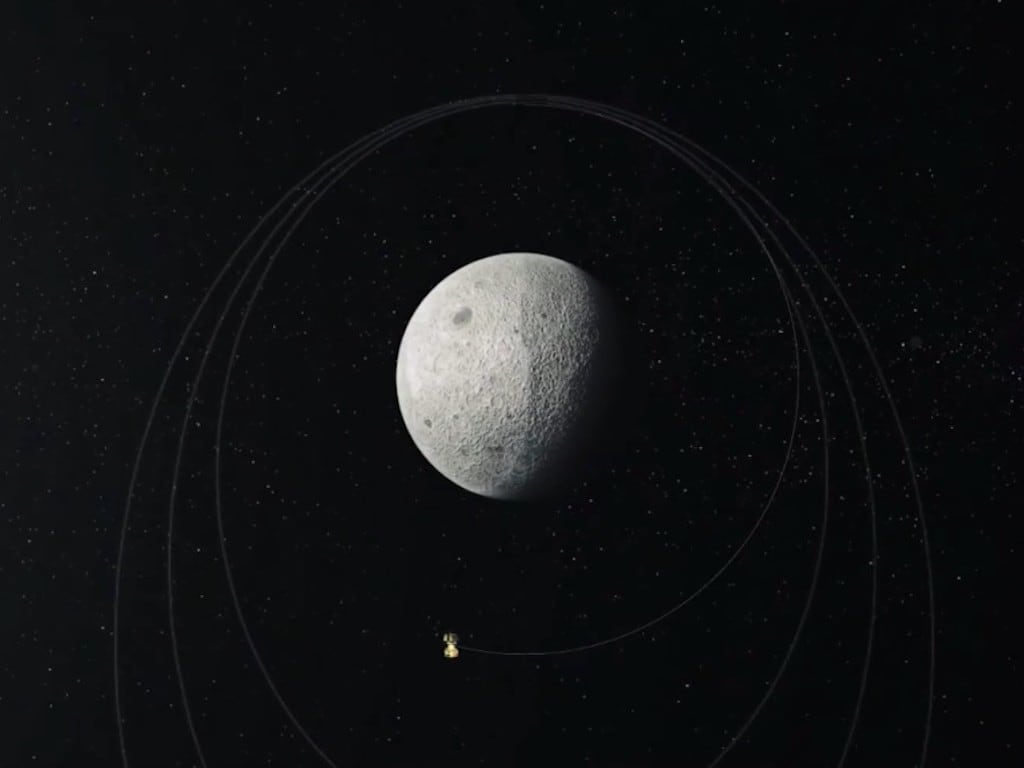 Chandrayaan 2 was successfully launched at 2.43pm on 22 July.

The spacecraft used Earth's gravity to amp-up its own velocity using a technique popularly referred to as 'gravity assist', to conserve fuel. The final orbit raising took Chandrayaan 2 to a distance of 1,43,585 km from the Earth — halfway between our planet and the moon. This is when the next critical manoeuvre of the mission was performed: translunar injection, where the spacecraft's trajectory was adjusted so it reaches the moon.

Here's a timeline for how each of these manoeuvers was performed:

For the spacecraft to enter the lunar orbit, it needed to be put on a trajectory to arrive at a constantly-moving moon. The translunar injection, or TLI, is a manoeuvre of the thrusts used to set a spacecraft on this moon-bound path. The Chandrayaan 2 composite took less than a week to arrive in the proximity of the moon. This manoeuver placed the spacecraft on a 266 x 4,13,623 orbit that ended in the next stage of the mission: lunar transfer. The spacecraft's Liquid Apogee Motor (a.k.a. thruster engines) are retrofitted to make this lunar orbit insertion possible.

Gradually, the spacecraft was closer to the moon with five 'Lunar burns'. This part of the mission is where the bulk of the adjustments were made to make the planned landing date of 7 September despite the one-week delay in the mission's launch. The Chandrayaan 2 composite was then put on a 'lunar transfer trajectory'. During this week-long phase, the spacecraft left Earth's orbit and began its 3,84,000 kilometre journey to the moon. The last of Chandrayaan 2's Earth-bound orbits brought it halfway to the moon. It used its thrusters to come under the moon's 'orbit of influence'.

The Chandrayaan 2 composite then had to slow itself down just enough by using its thrusters to fall into the moon's reach — gravitationally speaking. This was the main goal of the lunar transfer phase of the mission.

The location of the moon relative to the Earth is constantly changing. Thus, the intersection of Chandrayaan 2's path with the moon's was predicted and planned well ahead of time. When the moon approached the apogee of Chandrayaan 2 — its farthest point from the Earth — the on-board thrusters fired up precisely and slowed itself down for the 'lunar capture'.

This controlled transfer — breaking free from the Earth's orbit of influence and into the moon's — took place over days. This required the liquid apogee motors to be fired in the opposite direction to the spacecraft's movement, therefore slowing it down in a manoeuvre called "retrofiring". This allowed the spacecraft to come under the influence of the moon's orbit.

The lunar-bound phase, which was 28 days-long in the earlier launch schedule was shrunk to just 13 days. This is an important part of the orbiter's mission: surveilling its year-long home for the first time, ensuring that no damage was caused to its instruments on the journey thus far, and a thorough examination of the Vikram lander's landing site on the moon's South Polar region.

The lunar orbital insertion ended with the Chandrayaan 2 orbiter-lander composite entering a circular 100 km-altitude-orbit around the moon. 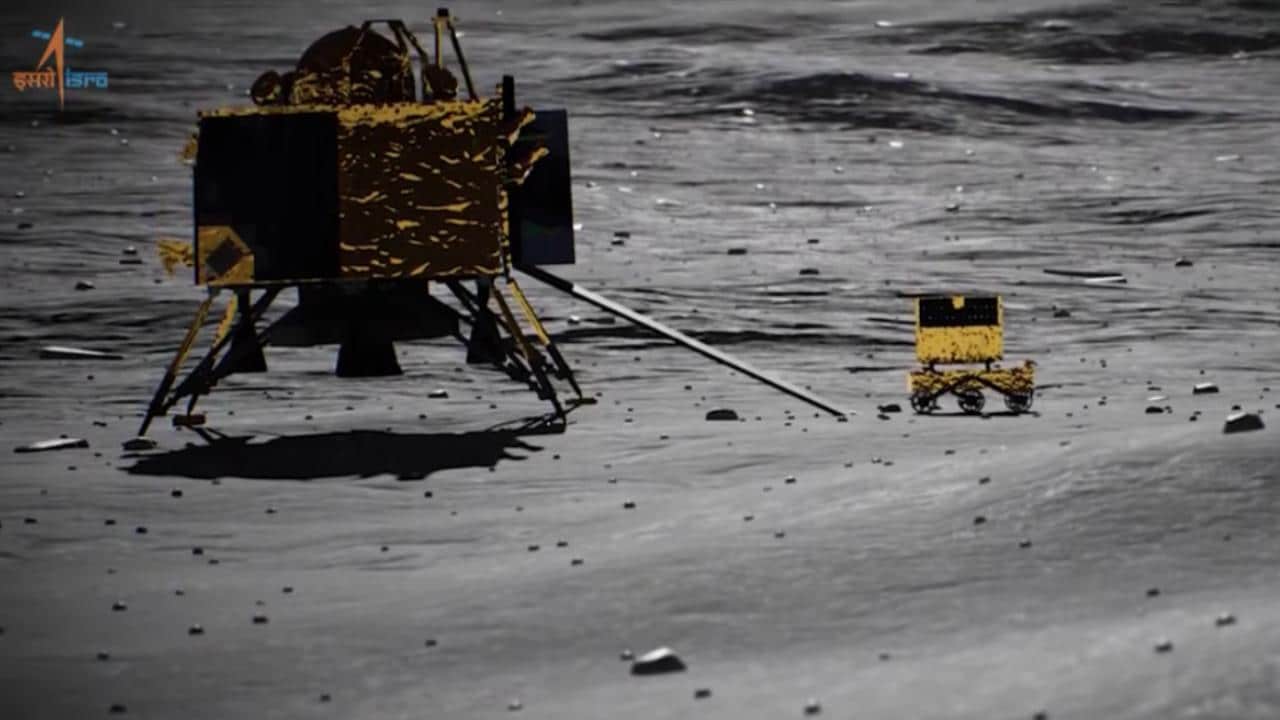 Illustration of Vikram lander and Pragyan rover on the lunar surface. Image: ISRO

Here's a quick timeline of how the lunar bound manoeuvers were performed after the lunar orbital insertion:

Till the 100 km orbit was attained, the spacecraft's three components were travelling together. After a few circular orbits at 104 x 128 km, the lunar lander separated from the orbiter on 2 September at 1.15 pm. The lander Vikram then used its propulsion system to lower its orbit to 35 x 101 km by deboosting. The lander continued moving in this new orbit for three days, during which it carried out checks on its systems and the landing system.

Deboosting is another challenging and critical milestone in the mission. The process of deboosting was necessary to slow the velocity of the spacecraft enough to drop/deliver it into the moon's gravitational field. This way, it achieved a "nominal" orbit around the moon.

Powered descent of the lander: 7 September

On the day of landing, that is expected tonight between 1 - 2 am, the propulsion system of the lander will perform an important task. It will break the velocity of the lander in a controlled way, where the engines are shut off well before the spacecraft touches the moon's surface. In the final seconds before landing, the Vikram lander will be assisted only by the moon's gravity and not the spacecraft's thrusters. This move is to prevent a mini-plume of lunar dust from covering the lander — and its solar panels.

From the 35 km orbit that the lander will use until the landing is going to be a 15-minute window of "terror". These 15 minutes, during which the lander will undergo an automated, pre-programmed landing sequence, "will be the most terrifying moment" for ISRO, the agency's Chairman said. This 15-minute flight is something ISRO has never undertaken – it is the most complex mission it has ever undertaken.

For the landing site, ISRO has picked a high plain between two craters Manzinus C and Simpelius N near the moon's South Pole. The spacecraft's onboard Navigation, Guidance and Control (NGC) system as well as the propulsion system of the module will need to work in perfect unison for the autonomous landing to be a success.

ISRO Chandrayaan 2 | In Conversation with Srinivas Laxman and Siddharth Pandey

ISRO Chandrayaan 2 | What is ISRO's interest in the Moon's South Pole?

ISRO Chandrayaan 2 | In Conversation with Srinivas Laxman and Rachana Reddy