Xiaomi Redmi 7A Review: A great entry-level smartphone that won't turn a lot of heads

The Redmi 7A is meant for Android first-timers with a budget that can't stretch beyond Rs 7,000. The Redmi 7A packs a punch for a phone that costs under Rs 6,000, but it's worth spending just a little bit more for a better device.

Budget smartphones are getting better by the day when you look at the features they offer, but there are very few entry-level phones that offer what the Redmi 7A brings to the table. Last year’s Redmi 6A, did come across as a mild disappointment considering how well the Redmi 5A (review) did for Xiaomi, but with its latest entrant, the company’s definitely tried to up the game for its rivals — Realme and Samsung.

Xiaomi's latest sub-Rs 6,000 phone boasts of an octa-core processor, a sturdy, splashproof build, a capable camera and a monstrous battery, making it a pretty obvious choice for those looking to buy their first Android smartphone. But the Redmi 7A, despite its appealing price and feature set, doesn't really go beyond the limit of just being a good entry-level phone, and that’s definitely something worth looking at given the bevy of options available under Rs 9,000. What’s changed with the Redmi 7A and what hasn’t?

Xiaomi's overhauled how their budget phones look in 2019, as we've seen with the Redmi Note 7 Pro (review), Redmi Y3 (review) and even the Redmi 7 (review). Thankfully, the Redmi 7A's no exception.

The moment I picked up the Redmi 7A, I felt like I was holding on to a chunky bar of chocolate. Compared to last year's Redmi 6A, the front fascia doesn't look too different, although the bezels have been shaved off ever so slightly. There's also a rather loud 'Redmi' branding on the bottom bezel, which I'm certainly not a fan of. 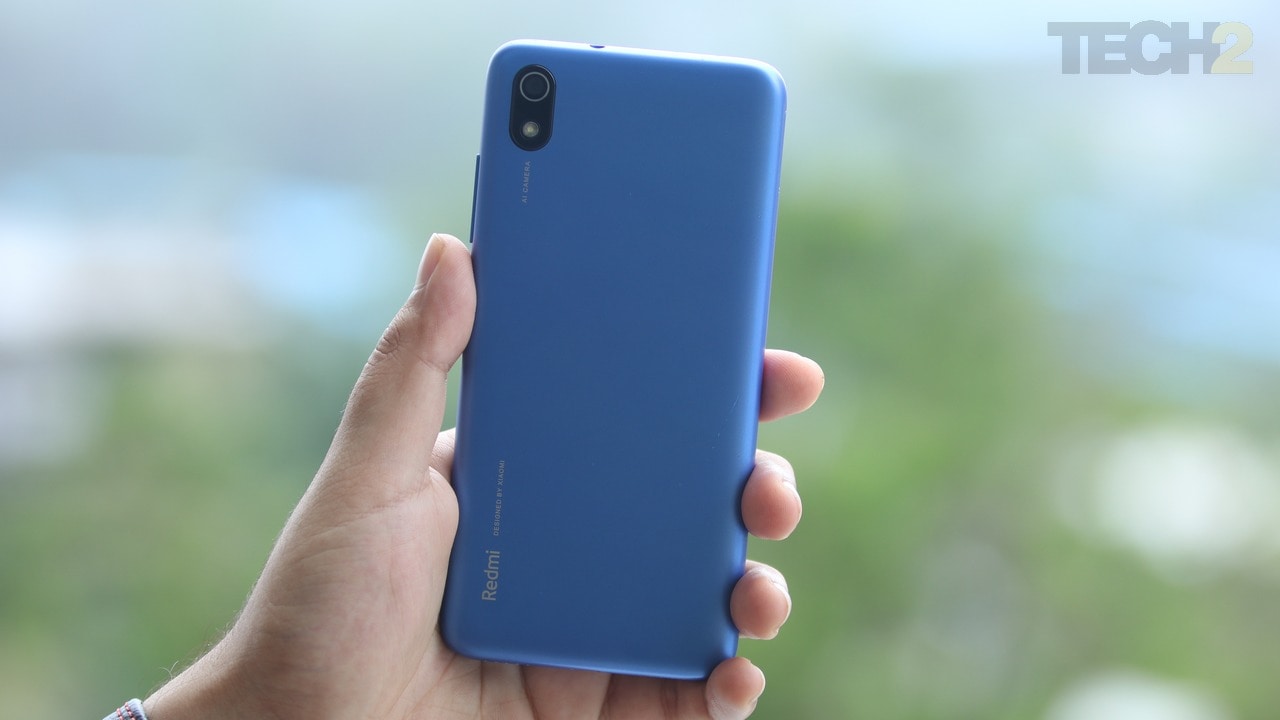 The Redmi 7A does not feature a fingerprint sensor at all. Image: tech2/ Sahil S.

What does look completely different though is the back. The back is clean to a point where it almost feels a little too bare, but I doubt a lot of people buying the phone will have an issue with that. Overall, I'd still lean towards the Realme C2 (review) if looks mattered a great deal, but the Redmi 7A isn't that far behind.

The display does remain unchanged and that’s certainly not a bad thing. I would have liked the panel to be a bit brighter, especially for outdoor usage, but for most users, this shouldn’t be an issue.

Design aside, Xiaomi's upgraded a number of things on the inside as well. This includes a move away from a quad-core MediaTek chipset to an octa-core Qualcomm Snapdragon 439 SoC, a more capable Sony IMX 486 camera sensor (which is the same sensor used by Xiaomi in the Mi A2 last year) and a battery upgrade to 4,000 mAh. The display on the phone could have been a tad brighter. Image: tech2/ Sahil S.

There's one addition though which we haven't really seen on any device at this price, and that is the inclusion of water seals in and around all the buttons of the device. Xiaomi claims that the Redmi 7A is splashproof, and having reviewed the phone at a time when the monsoon in Mumbai is in full swing, I can vouch for that claim. The phone can certainly deal with splashes of water, but don't try and submerge the phone in water. The Redmi 7A is not meant for heavy gaming, but it certainly has the Realme C2 beat

It was surprising to see Xiaomi move away from Qualcomm chips for the Redmi 6 series last year, but come 2019, that’s certainly changed. The Snapdragon 439 chip here handles daily tasks with aplomb and I definitely found myself surprised by how well Xiaomi’s optimised MIUI 10 on top of Android 9 Pie. Heavy apps like Facebook and Twitter did stutter a couple of times throughout the span of my review but considering the phone costs just Rs 5,999, I’m certainly not complaining. I did play lighter games on the Redmi 7A and the phone handled them without complaint. Image: tech2/ Sahil S.

But what about gaming? Can you play PUBG Mobile on this? Well yes, at the game's lowest settings, you will manage somewhat playable frame rates. But this phone’s certainly not meant for gaming. With the entry-level variant which comes with 16 GB of storage, there’s very little room to store games like PUBG Mobile anyway. I did play lighter games like Battlelands Royale and Stupid Zombies on this and they ran without any hiccups whatsoever.

Coming back to the issue of low storage, there is considerable bloatware here (apps that you can uninstall, of course) and the onslaught of ads that MIUI keeps throwing at you. Xiaomi also has the Mi Credit app (an app that helps MIUI users apply for quick loans, if you're wondering) pre-installed on the Redmi 7A, which does make sense considering the market the phone is targeted towards.

The onslaught of ads on MIUI is seriously annoying.

With just 2 GB of RAM, I wasn’t able to do a lot of multitasking, let alone having games run in the background. Xiaomi certainly could have offered more RAM here to start with, but overall, for everyday use, I certainly didn’t encounter any major stutters with the Redmi 7A — an area where it certainly excels over the more expensive Realme C2.

What’s more, you have dark mode on a phone that costs barely Rs 6,000! Now dark mode on an IPS panel doesn’t have any bearing on the battery (not that battery is an issue on the Redmi 7A anyway), but it’s certainly nice to have it as an option anyway.

Camera performance is a tad misleading

The camera performance of the phone isn’t bad or even average for that matter, given the competition. While the Redmi 7A and Mi A2 share the same sensor, the A2 does sport a beefier chip with a better Image Signal Processor (ISP), witch means that images will, inevitably, look better on the A2. In daylight, the Redmi 7A’s rear-facing 12 MP f/2.2 sensor doesn’t disappoint, but after using the phone for a while, I did realise that I needed to be extra still while taking a photograph. There’s also no portrait mode here, something we did see on the Redmi Go as well. That said, colours are pleasant and the HDR isn’t too aggressive when put in use either. 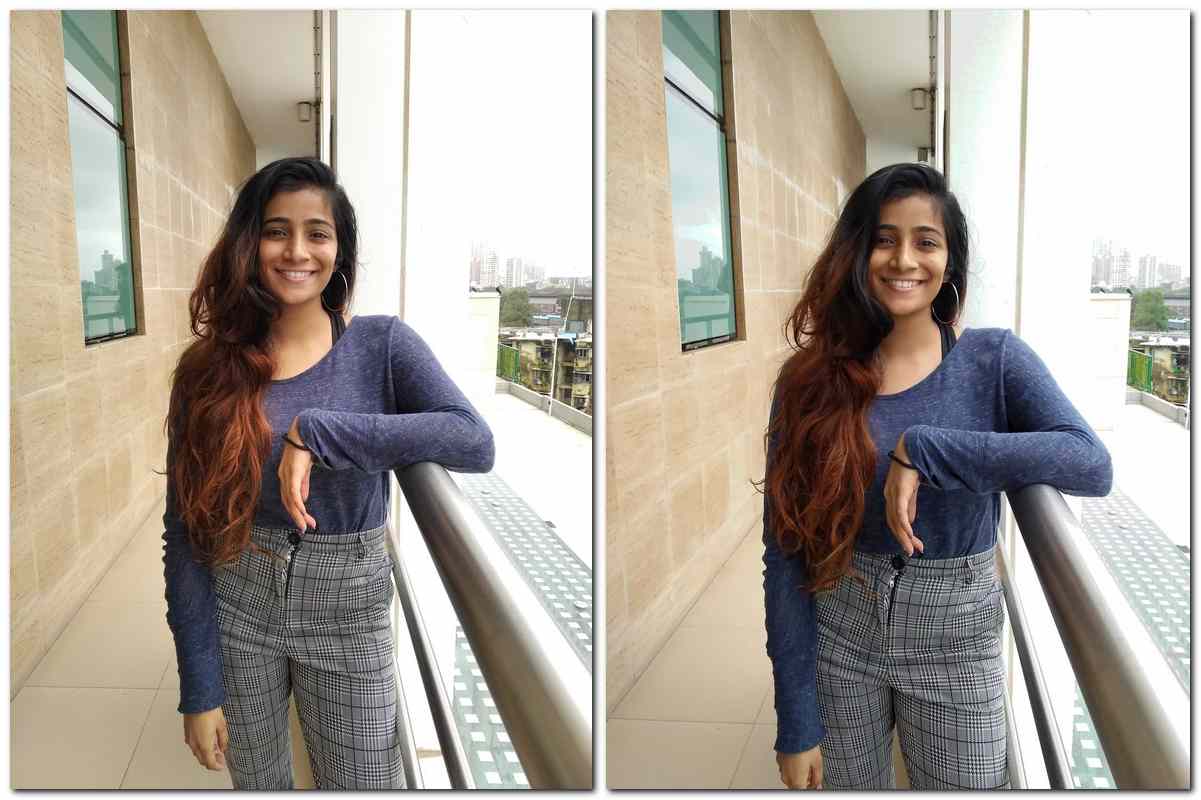 Redmi 7A (L) vs Redmi Go (R): Both phones lack a portrait mode. (Click on the image for full res samples)

Move to dimmer, artificial lighting conditions and you’ll see the camera struggling. Not surprising for the price. but a minor letdown nonetheless. Xiaomi claimed to have tweaked the algorithms to hence enhance night shots, but that didn’t seem to make much of a difference here. The images shot at night do turn out brighter than what you’d expect, but the details just end up washed out. Overall, I’d still say that the Redmi 7A performs a tad better than the Realme C2, judging by colour reproduction. I did manage decent selfies with the Redmi 7A though, and there’s also a portrait mode here. Despite being the same 5 MP sensor, I did like the selfies from the phone, even though the camera does struggle with highlights. The phone also shoots decent video at 1080p but without any image stabilisation, you won’t really be using the 7A for simple vlogs and such.

You won’t have to charge the Redmi 7A every day

Xiaomi clearly appears to produce 4,000 mAh batteries in bulk and just like every other phone the company’s launched in 2019, the Redmi 7A gets one as well. With a relatively small HD display to power, the battery on the phone easily got me through a day with close to 45 percent juice to spare. In fact, the battery here could even last you two days with moderate usage. That could partially be because I wasn’t playing battery intensive games on this phone, but even then, I certainly don’t think anyone would complain about battery life here. What would have been a bonus though is the inclusion of a fast-charging adapter, but Xiaomi’s got you stuck with a 5 W charger that takes more than 3 hours to juice up the large 4,000 mAh battery. But hey, if it works for Apple...

For Rs 6,000, the Redmi 7A is definitely the best in the business

If you're looking to buy a phone that's inexpensive yet powerful enough to get you through your day, the Redmi 7A's definitely the phone you should be looking at. The stellar battery life, a decent processor and a clean and sturdy build does make the Redmi 7A the sweetest deal you could have for Rs 5,999.

That being said, if you are a fan of bolder designs and don't really mind a slight compromise in performance, I'd still pick the Realme C2, which will set you back by Rs 6,999.

If you are willing to stretch your budget a wee bit up towards the Rs 10,000 mark, you will be looking at far more capable phones — especially if gaming and better cameras matter to you.