With an attractive design, Xiaomi’s Redmi 7 is setting new benchmarks for the entry-level segment.

A feature-packed entry-level smartphone that is priced right!

Back in 2018, I reviewed the Redmi 5 the entry-level device which packed in a Snapdragon 450, which was a decent chipset paired with 3 GB RAM. Taller 18:9 display ratios were the trend and Xiaomi was a bit late to jump on to the train even though it was one of the few manufacturers to offer such a display in the entry-level smartphone segment. Design was not really a priority and the handset featured a slim, yet basic (non-flashy design) with a metal back.

In 2018 itself, it became evidently clear that brands like Honor with their snazzy designs were posing a threat to the Xiaomi’s empire and so Xiaomi finally took a call and began introducing some cool-looking handsets in India in 2019, starting with the Redmi Note 7 and the Redmi Note 7 Pro. And now we have Redmi Y3 and one you have come here to read about, the Redmi 7. 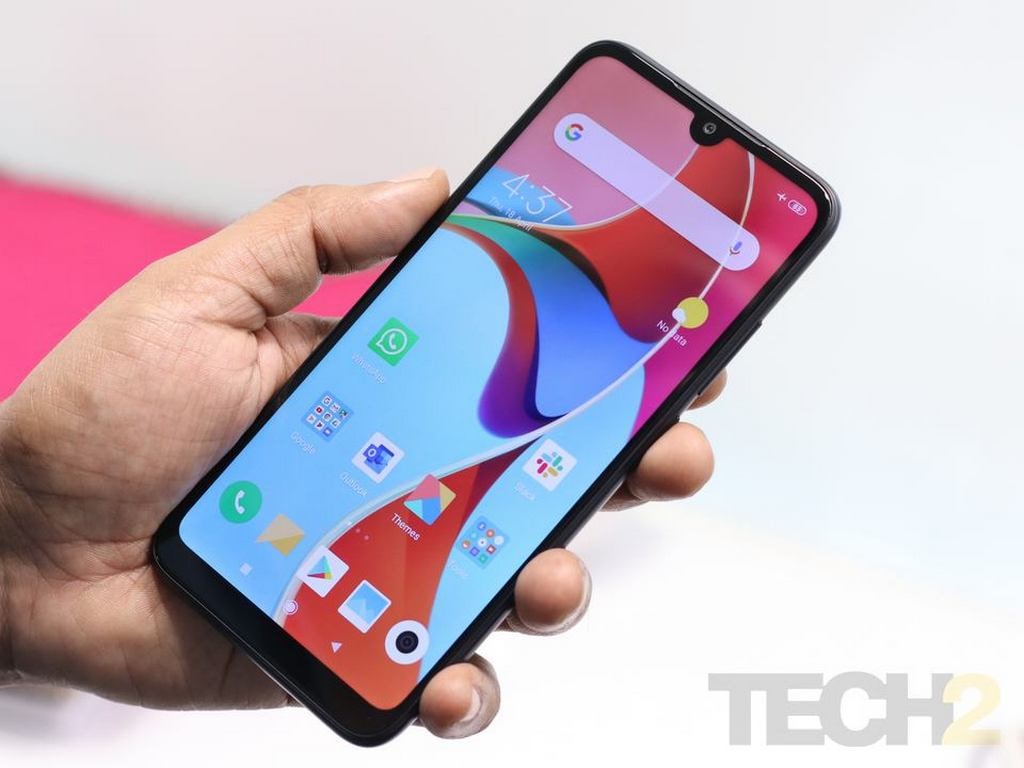 As you can tell from the previous paragraphs, Xiaomi was all about specifications and competitive pricing, but never about style. The Redmi 6 looked absolutely boring even though it packed in a decent chipset and even the new Redmi 6 Pro model despite being a great smartphone still did not feature an attractive design. 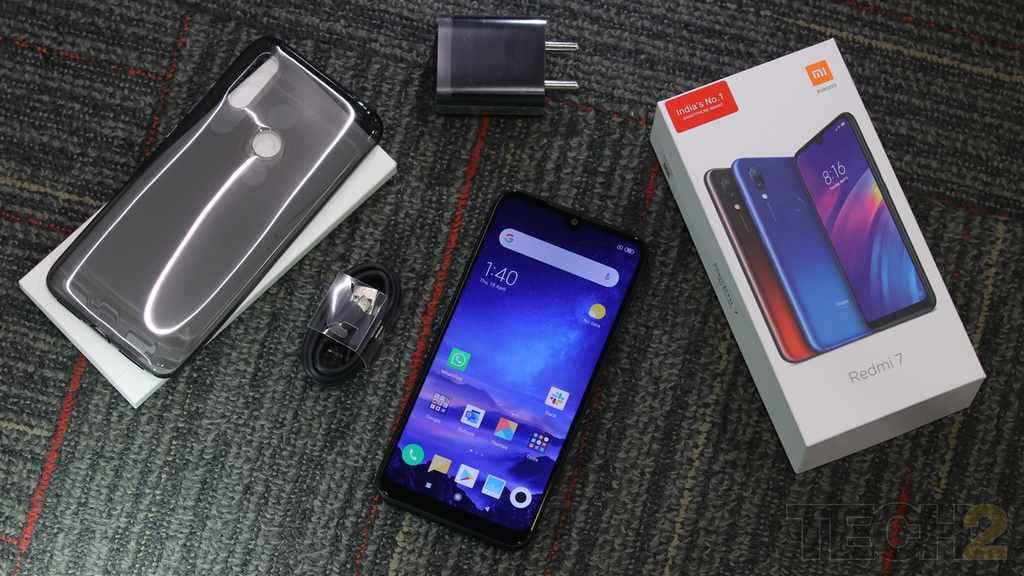 So, for 2019, Xiaomi gave the Redmi 7 an overhaul. And boy is it a big leap! The design looks stunning, both camera and video performance are pretty much the best you can get in this price range and that Snapdragon 632 SoC does a fine job of holding it all together.

But as always, no smartphone’s perfect. So, let’s take a look at what’s hot and what’s not about the new Redmi 7.

Smartphone chipsets are getting pricier by the year and this is what makes it extremely hard for manufacturers to deliver great hardware in an attractively designed package. The best way to cut down on costs is to obviously go with plastic instead of metal.

Samsung did the same with the Galaxy M10, but it does look and feel a bit cheap. 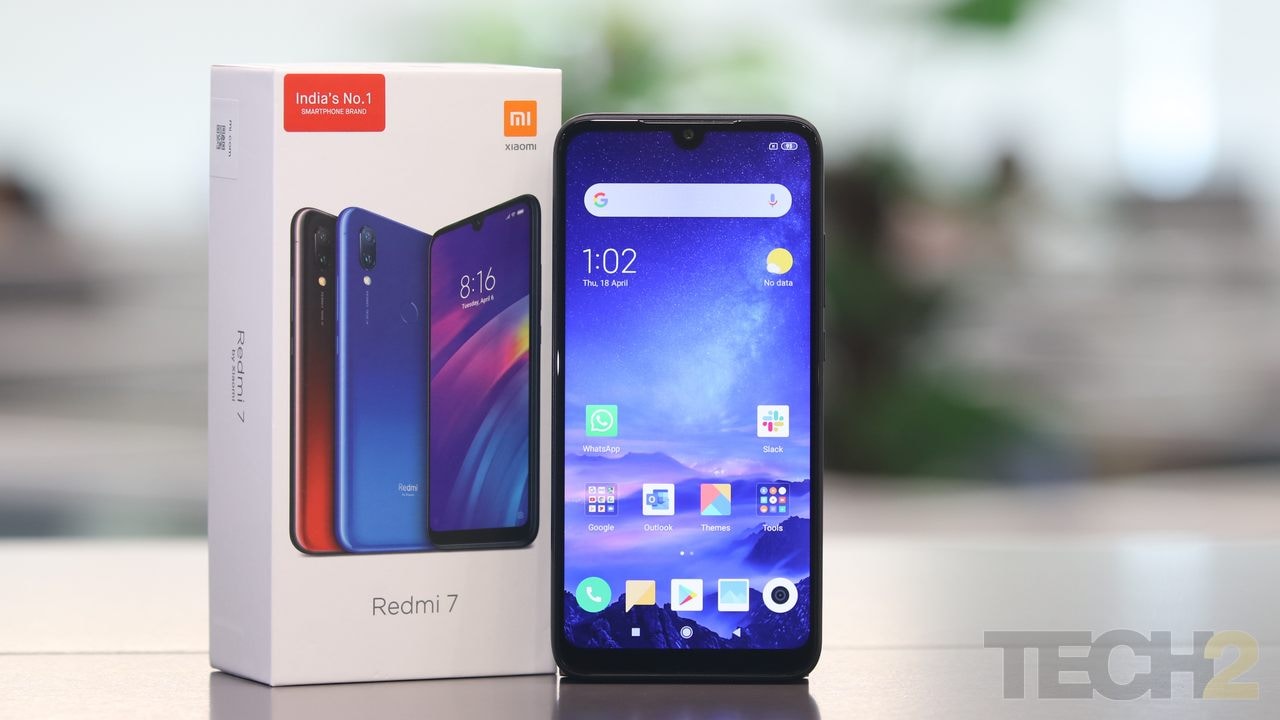 The Xiaomi Redmi 7 is a breath of fresh air in the entry-level smartphone segment. Image: Omkar Patne

Xiaomi went all-plastic with the ‘Aura Smoke’ design of the of Redmi 7. We received the Eclipse Black model for review and even though it does not feature a gradient finish, like the stunning Lunar Red and Comet Blue finish, its subtle and elegant. 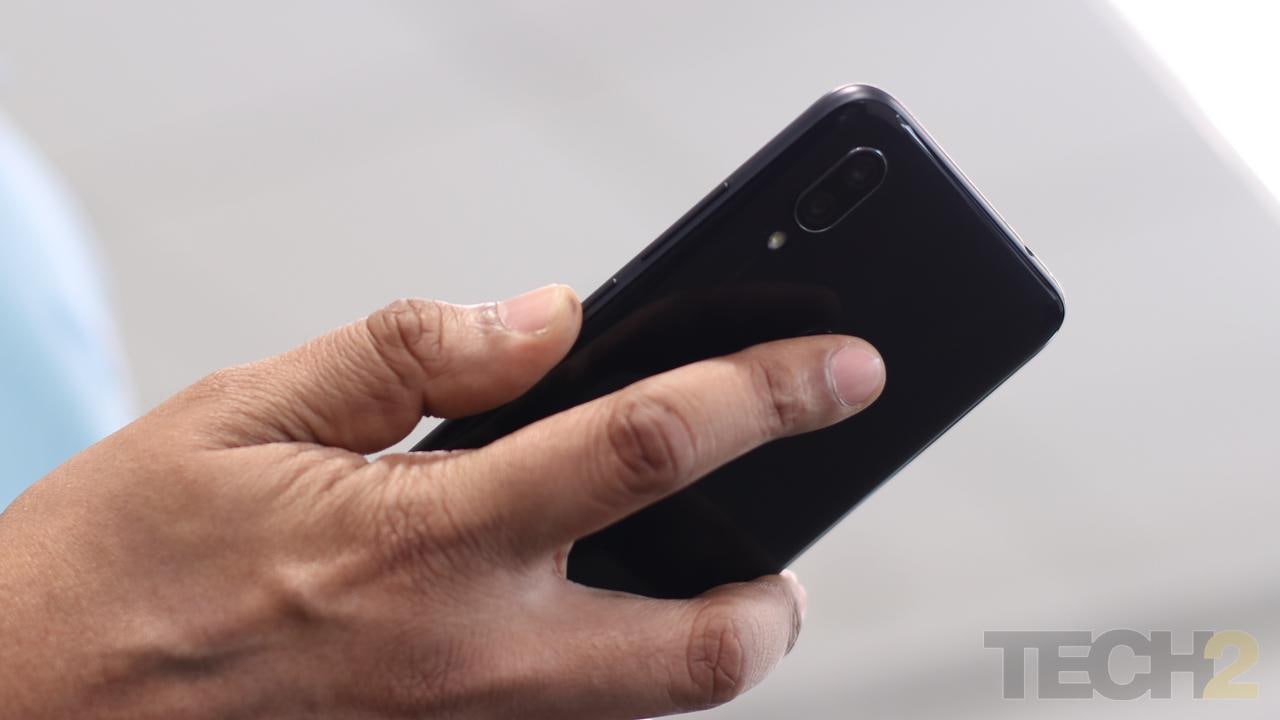 The fingerprint reader sits at the back. Image: Omkar Patne

The design is quite deceiving in the sense that it could convince many that it’s made of glass and metal. But this new Redmi is completely made of plastic. 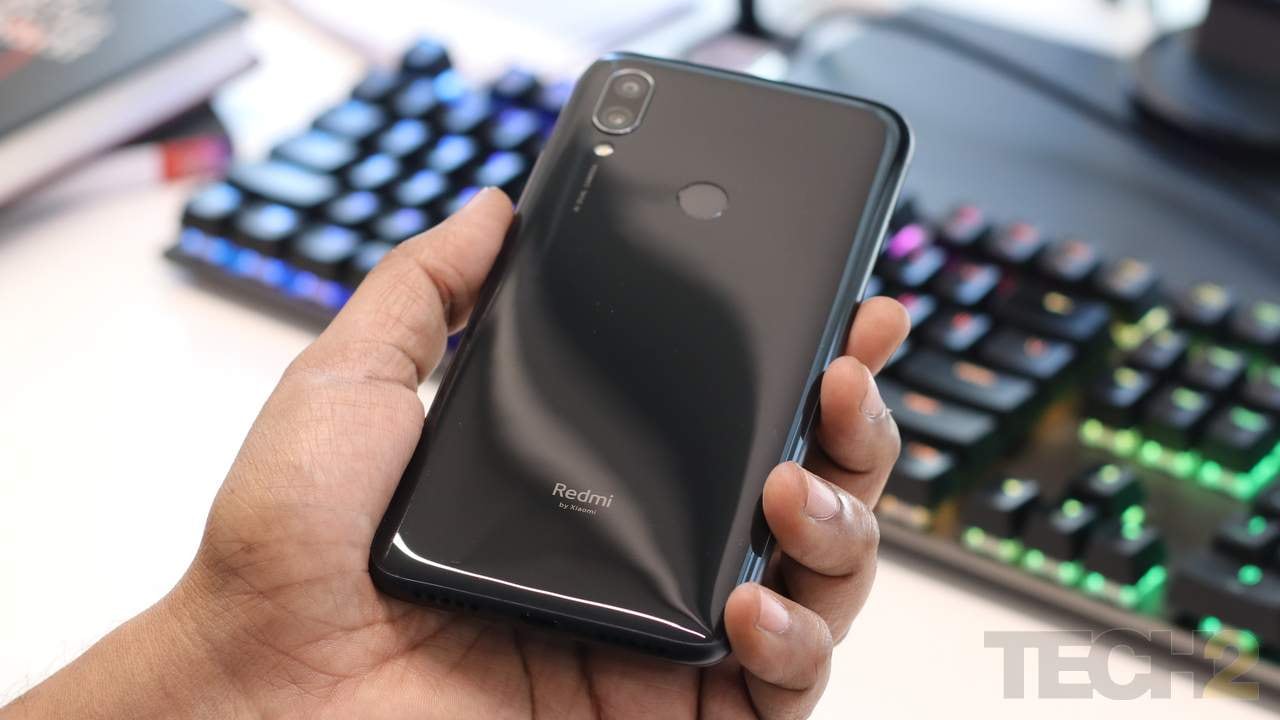 The plastic back looks like glass and remains smudge-free. Image: Omkar Patne

And a good reminder is the number of scratches that have shown up on the back over a few days of use. The matte-finished frame, however, holds up pretty well. The plastic back catches scratches quite easily. Image: Omkar Patne

While I expected this device to be a smudgy mess, it’s not. You do see a few smudges from time but they can be wiped off easily. And that’s is because the Redmi 7 is the only phone in this price range that features an oleophobic coating on that back panel. Impressive stuff Xiaomi! 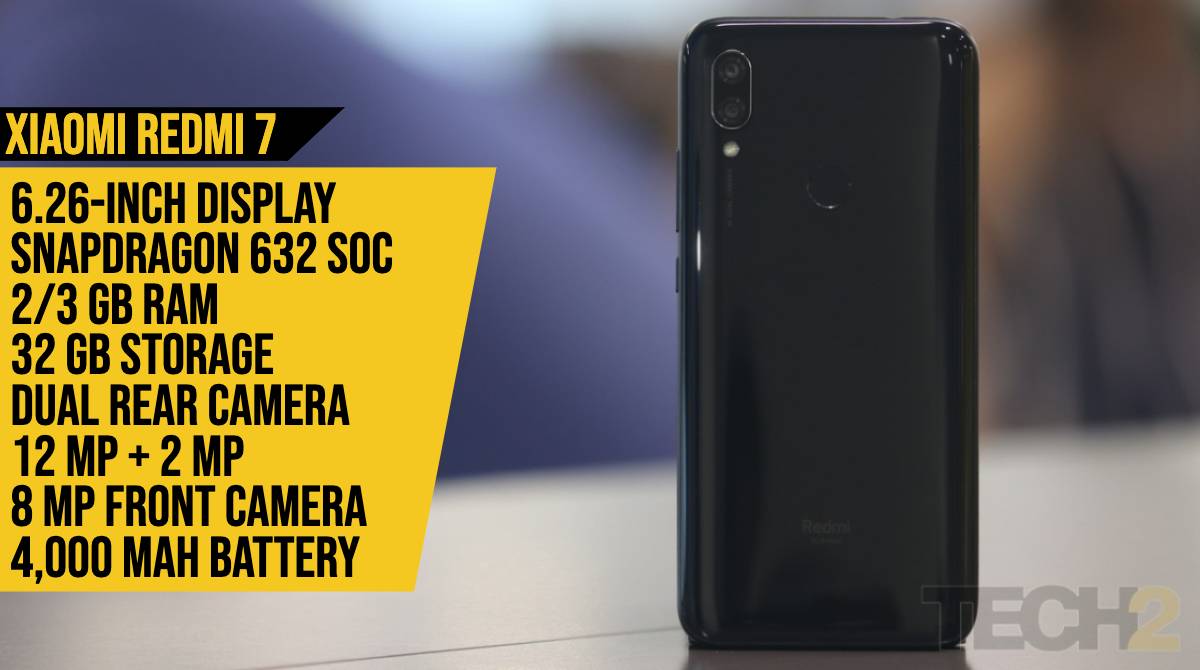 A quick glance at the core specifications of the Redmi 7.

The HD+ (1,520 x 720 pixels) LCD display showcases a slightly bluish tinge. But that would be nit picking on this otherwise brilliant display, given the smartphone’s price tag. The colours are a bit saturated, but most will find this display pretty much at home.

It’s also bright enough for use in direct sunlight and the colours surprisingly do not get washed out outdoors as well. Viewing angles are great too but I wish this display could have been a bit brighter. The Dot notch display does not intrude into your viewing area. Image: Omkar Patne

And then, there’s that display notch. Xiaomi calls it the Dot Notch display and while it really did not bother me in day to day use, I would have preferred that the large chunky chin at the bottom came with capacitive navigation buttons as it seems like a waste of space.

Gorilla Glass 5 protection is the icing on the cake and I did not notice any scratches on the screen during the review period.

I love the new MIUI 10, but I simply hate that it will keep feeding you with ads in most of Xiaomi’s native apps. I spotted these ads in the Downloads app and the Security app and even in the Guide tab (swipe left from Homescreen). 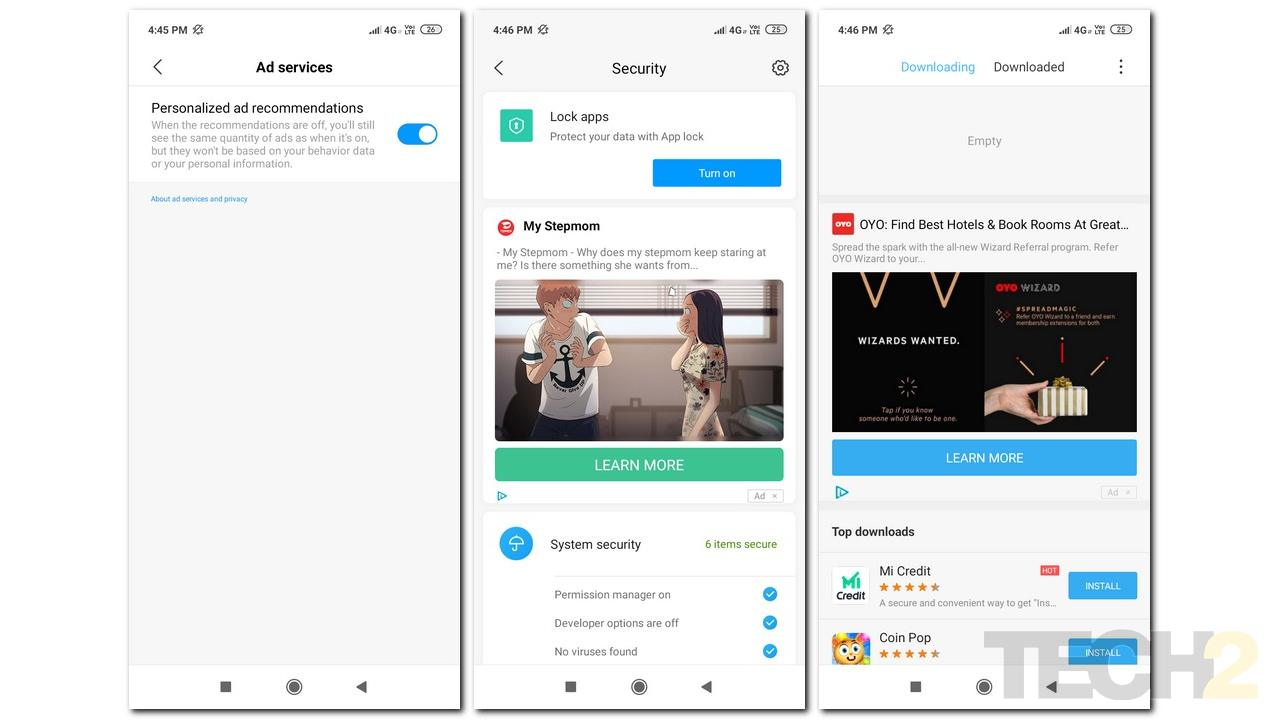 If there's one thing I hate about MIUI its the ads. But you can turn them off.

You can turn these off by heading into Settings and typing in Personalised Ad Recommendations in the search bar. But most customers would not bother and more importantly would not know how to switch these ads off. It’s 2019, and we are pretty sure Xiaomi fans themselves are tired of these ads showing up in a smartphone’s OS (who else does this?) The recents menu is kind of a mix between Ubuntu phone and BlackBerry's Android OS. Image: Omkar Patne

Apart from the ad-problem, the user experience is pretty good, with minor hiccups from time to time. I love the design of the Recents menu with its tiled layout (which looks like a BlackBerry Recents menu, only better).

While MIUI is usually quite optimised I did notice a few instances where the phone stuttered or dropped frames between transitions. These can easily be ironed out with a few software updates.

Performance that matches its price

At Rs 7,999 you really would not expect a device to be able to chomp through the latest 3D games. But at Rs 8,999 you do get something that can get you decent or passable gaming performance. Games like Asphalt: Xtreme ran at HDPI and Quality graphics, while PUBG Mobile only ran on Low graphics. The phone did not heat up while playing these games. Casual games like True Surf and Grand Mountain Adventure worked just fine and ran without any issues. Shadowgun: Legends ran on low to medium graphics settings but at 30 fps only.

The Qualcomm Snapdragon 632 is a good 14 nm SoC given the phone’s focus on battery life.

It is more than capable of delivering a smooth software experience whether you buy the 2 or the 3 GB RAM variant. 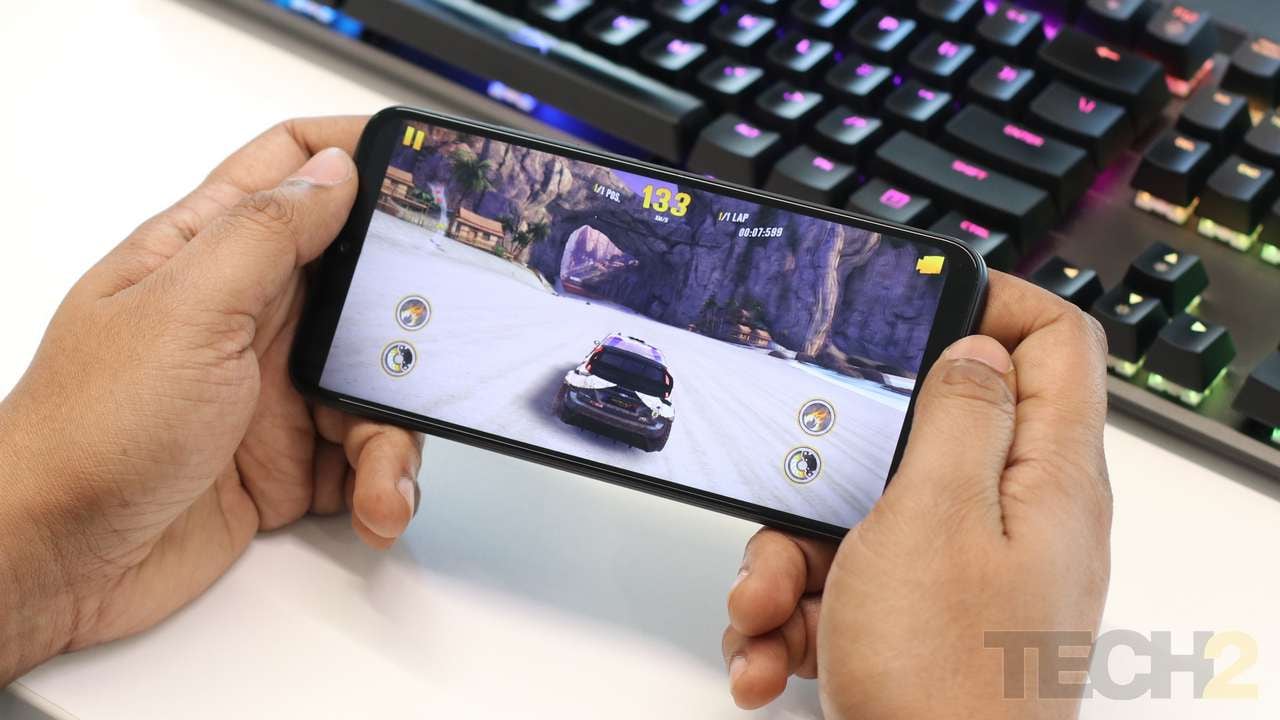 We did not get the opportunity to use the 2 GB RAM variant of the Redmi 7, but seeing how well the phone performed with 3 GB RAM onboard, it sure looks like it could pull off similar performance with 2 GB RAM as well.

Call quality was pretty much what you expect from this price range and the same can be said about the audio quality through the headphones.

With a 12 MP + 2 MP rear camera and an 8 MP front camera, the performance was not far from what I expected. In daylight, photos looked vibrant and saturated, with HDR rescuing images from blown out highlights. The dynamic range was great too. While the images looked sharp on the smartphone, moving them to a bigger display saw a noticeable lack of details in the photographs across all types of lighting conditions.

You check out all the camera and video samples in the gallery below or head to our Flickr album by clicking here. Things got worse after sunset and the camera had a tough time focussing on dim or low light settings.

The Portrait mode worked well with decent edge detection, but the images we just not sharp enough and felt a bit soft. 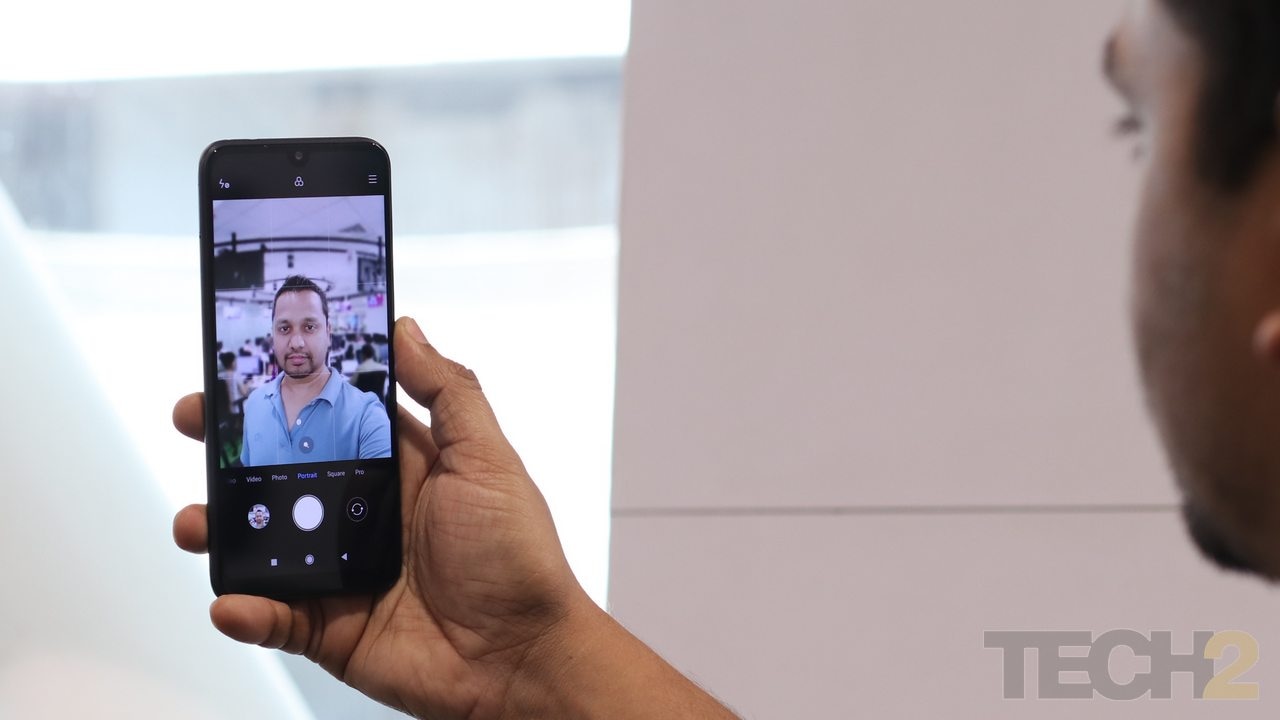 I compared them to another smartphone in this range, the Asus Zenfone Max M2 and while the Asus delivered duller images overall, they did look a lot sharper.

Moving to video, I was surprised to see that the Redmi 7 can shoot FHD video at 60 fps. While the framerate was higher, I did prefer the 30 fps footage both of which was better than what I got from the Asus Zenfone Max M2. The phone also kept jumping focus when shooting 60 fps video even in broad daylight.

All-in-all, the Redmi 7 features a pretty capable camera, that can also shoot good Portrait photos and deliver decent video, given its pricing.

Sporting a 4,000 mAh battery (which is a Xiaomi standard) the Redmi 7 delivers some pretty good battery life times. Battery life on the Redmi 7 is pretty darn good!

Going through WhatsApp, Slack, 3 email accounts on sync, some gaming, photos and plenty of calls, the phone easily got me through a workday with about more than 30 percent to spare. With casual use, the phone would easily go beyond a day.

Using the 10 W charger to charge that 4,000 mAh battery did take some time.

Redmi 7 verdict and price in India

The Redmi 7 is a fitting successor to the Redmi 6 and even the Redmi 6 Pro. It packs in a great display, a capable chipset and for once actually looks good compared to any smartphone in its price range. The Xiaomi Redmi 7 is a great smartphone at a great price. Image: Omkar Patne

Samsung’s Galaxy M10 makes for a great alternative, but doesn’t look that great despite featuring a plastic build and more importantly packs in an Exynos 7870 SoC, which is not all that powerful when compared to its Qualcomm counterparts.

The Asus Zenfone Max M2, is a great alternative given its starting price of Rs 8,499. It gets you an almost stock Android software and even packs in a capable camera and a 4,000 mAh battery.

So, it all boils down to software. If you like Xiaomi’s MIUI it’s the Redmi 7 is a really good deal given its Rs 7,999 price. If you prefer stock Android, then the Asus Zenfone Max M2 is a better option. But if you want a cool-looking smartphone, then the Redmi 7 is definitely the better looking one of the two!