The Redmi Y3 is a well-rounded smartphone that offers a unique selfie camera experience on a budget. The best selfie phone on a budget

Xiaomi may be one of biggest players in the budget smartphone market in India but all the devices they've launched over the past couple of years haven't been smash hits — particularly the Redmi Y series. The Redmi Y1 never really took off the way Xiaomi intended it to and its successor, the Redmi Y2 was just too closely positioned to the Redmi Note 5.

With the Redmi Y3, Xiaomi's gone back to the drawing board and changed quite a few things to ensure that it stands out. Launched at a price of Rs 9,999 for the 3 GB RAM/ 32 GB storage variant, the Redmi Y3's price is almost the same as the recently launched Redmi Note 7 and goes toe-to-toe with the Realme 3. We get a brand new 32 MP selfie camera, a Qualcomm Snapdragon 632 chipset, a big 4,000 mAh battery, and a refreshing new design. But does the Redmi Y3 really cater to the youth with what it has to offer? Or are you better off picking up the Realme 3 (review) or the Redmi Note 7? Designed to wow the masses

One look at the Redmi Y3 and it will certainly grab your attention. Gone is the dull, monotonous single tone brushed-metal-esqe plastic finish we saw on almost every Redmi device that was launched last year, for an overall look that takes a lot of design cues from the Redmi Note 7 series.

Xiaomi's fancily calling this the Aura Smoke design but there isn't anything here which we haven't seen before — a two-tone gradient finish that refracts light, a drop-notch display and curved edges for better grip. That said, Xiaomi's approach here is certainly subtle and something that would appeal to a lot of people. Perhaps even to those who wouldn't actually be thinking of picking up a phone with a gradient back. 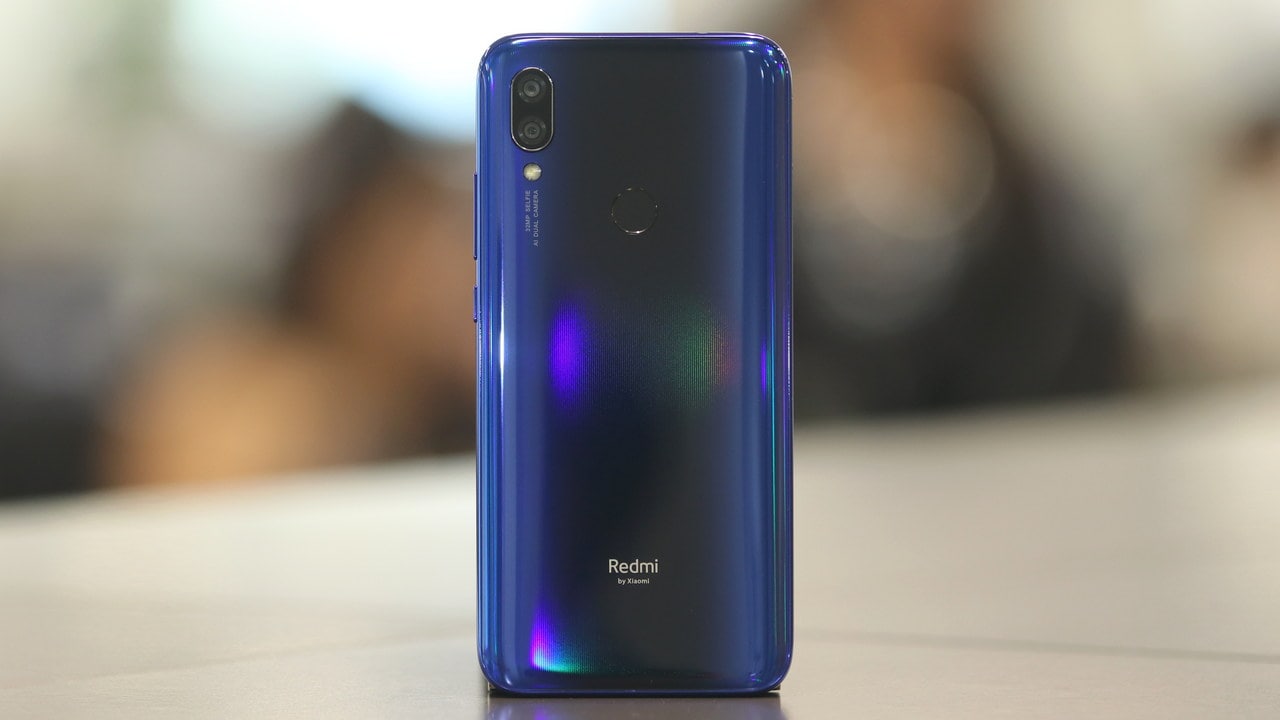 The back features a distinct gradient finish with a subdued stripe-like pattern. Image: tech2/Omkar P

As far as construction goes, the phone is completely made of plastic but feels fairly sturdy. In terms of size, the Redmi Y3 is just as big as the Redmi Note 7 Pro, but the curved sides certainly help a great deal in gripping the phone. The use of plastic on the back does make the phone feel like a sub-Rs 10,000 budget device but also ensures that the phone is easy to grip.

Considering the phone's highlight is its selfie camera, I had no issues holding the phone in place with one hand while taking photos.

The phone is 0.2 mm thicker than its predecessor and Xiaomi's blaming that on the fact that the plastic panel on the back has been made thicker than normal to ensure better durability. There's also P2i-rated water and dust resistance here that Xiaomi spoke about at the briefing but has not marked official on its site. Still, it's something we haven't seen any phone maker offer at this price. 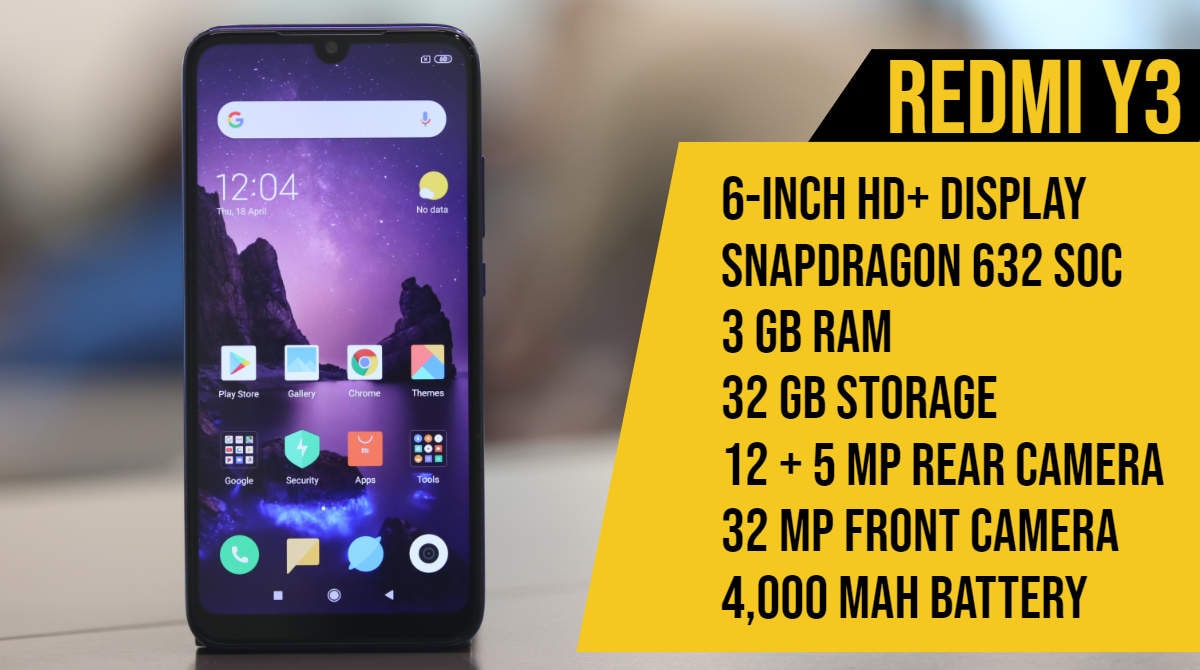 You wouldn't complain watching videos on this phone

Apart from adding the small dot-notch on the top, Xiaomi hasn't tinkered around much with the display on the Redmi Y3. The new smartphone features a 6.26-inch IPS LCD display with a resolution of 720 x 1520 pixels. Yes, you read that right. Despite having a large 6.26-inch display, Xiaomi's stuck with an HD display here and not full HD. While that may sound like an odd choice in 2019, it sure has its benefits.

For one, powering a display with a smaller resolution means that the chipset draws lesser power which essentially helps with battery life. Secondly, it also helps in keeping the cost of the phone low. 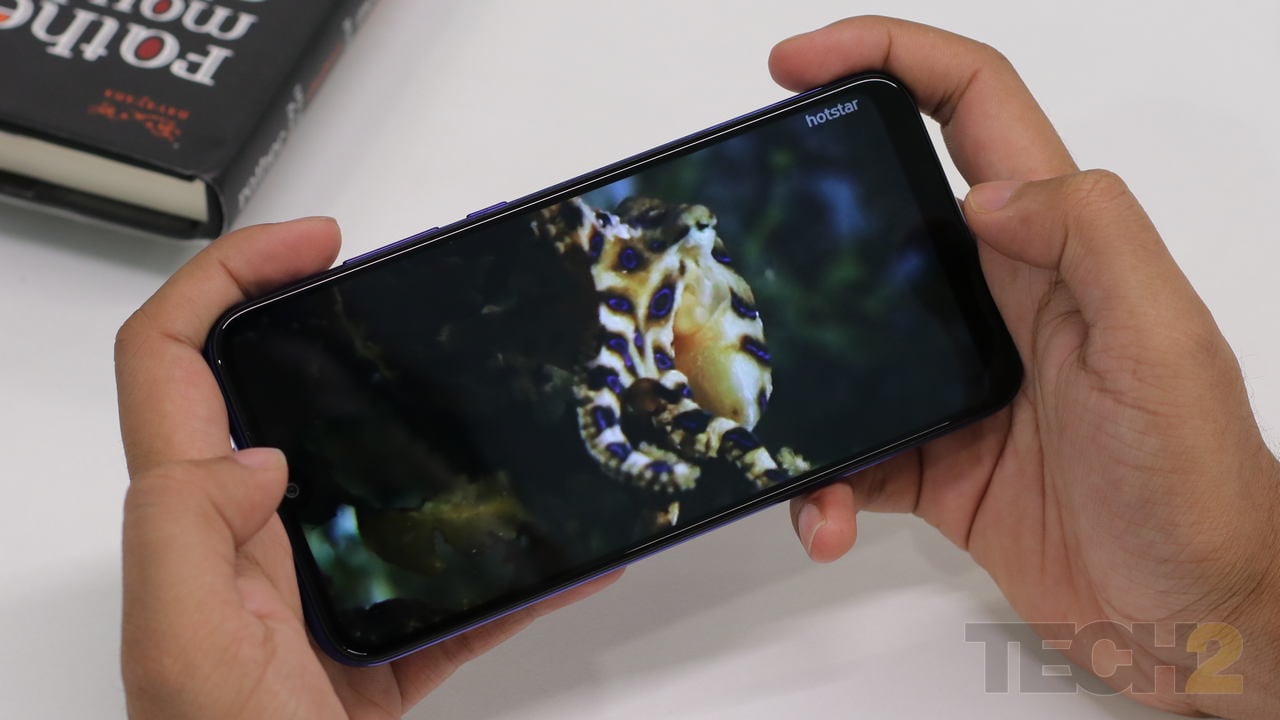 You will barely notice a drastic difference in overall quality on the 6-inch HD display while streaming content. Image: tech2/ Omkar P

But how does the display fare? Well, to sum it up, quite well. Colours are not too punchy, brightness levels are alright and the drop in resolution certainly isn't something which will bother you if you're catching up on an IPL match or watching a YouTube video. Besides, if the resolution is a deal-breaker for you, you can always pick up the Redmi Note 7 instead.

Xiaomi's also added Gorilla Glass 5 protection on the front if you're someone who happens to drop their phone a lot.

Performance on the Redmi Y3 is just about right for what you pay for. We had the 3 GB RAM unit with us and the phone handled tasks like browsing through social media content, web-browsing and casual video-streaming with aplomb.

Switching between everyday use apps like Facebook, Twitter, Slack and WhatsApp were a non-issue, the phone being able to hold each of these apps in memory every time they were left open in the background. Now, for a phone that's priced under Rs 10,000 you wouldn't expect a 14 nm Qualcomm Snapdragon 632 chipset to power its way through games like PUBG Mobile and Asphalt 8: Airborne. However, both these games were quite playable, with little to no frame drops when on the lowest graphics settings.

For lighter titles like Subway Surfers, Clash Royale and Homescapes, the chip was actually able to run these games flawlessly.

Call quality was excellent and so is the audio output from the headphone jack.

Fluid software marred by an onslaught of ads

I have used plenty of Xiaomi devices over the past few years but never have I ever been this annoyed by the number of ads I was seeing at every moment I spent with the Redmi Y3.

Beginning with the 'Guide' tray to even the built-in 'Security' app fed me ads. It is pointless ranting about something that's been talked about a lot already but Xiaomi seriously needs to address this issue. In fact, at this point, I'd even agree to pay for an ad-free MIUI 10 experience.

There are workarounds to this ad onslaught which require little effort but more than anything, it mars the MIUI 10 experience, something which in itself works almost flawlessly on the device.

The best selfies you can get any phone under Rs 10,000

The Redmi Y3 features the same 12 + 2 MP rear camera setup we saw on the Redmi Note 7 but the highlight of the entire package here is definitely the phone's 32 MP front camera. Selfies turn out great under most lighting conditions with exceptional detail and so do videos. If vlogging is something you do often, the added EIS on the front camera will also be of interest to you. If I had to nitpick, I did find the background separation a tad aggressive while using the portrait mode, but that certainly won't be much of an issue for most users.

As for the rear camera, the Redmi Y3 captures vibrant images in daylight with a decent dynamic range. The photos certainly become visibly softer in dimmer lighting but at this price, you wouldn't complain. I also found the resulting images less sharp than what can be seen on the viewfinder but that's again something that doesn't matter much if you're planning to share these images on social media anyway. Besides, Xiaomi can easily address this issue via a software update. The Portrait mode worked well with decent edge detection, but here the softening of images overall was more visible.

Compared to the Asus Zenfone Max Pro M2 (review) and the Nokia 5.1 Plus, the Redmi Y3 still manages to a better job of background separation and colour accuracy, even though the Zenfone boosts up the contrast.

The Redmi Y3 is also capable of shooting FHD video at 60 fps with EIS through the rear camera. The resulting footage is certainly the best we've seen at this price, save for the focus hunting the phone does while panning.

With a lower-resolution display, a 14 nm chipset and a 4,000 mAh battery unit, I was expecting nothing short of two days of use with Redmi Y3. While the phone wasn't able to achieve that with heavy usage, lasting me a day and a half, with moderate usage, I was easily able to pull through two days without having to scrounge for my charger. The Redmi Y3 ships with a standard 10W charger in the box. Image: tech2/ Omkar P

Even though the Redmi Y3 isn't particularly a gaming-oriented device, the battery drain while gaming also wasn't too drastic.

The Redmi Y3 is a fitting successor to last year’s Redmi Y2 (review), offering a unique selfie camera experience on a budget. The phone trumps the Realme 3, it’s prime competitor in the price bracket and also offers a distinct set of features than the similarly priced Redmi Note 7. 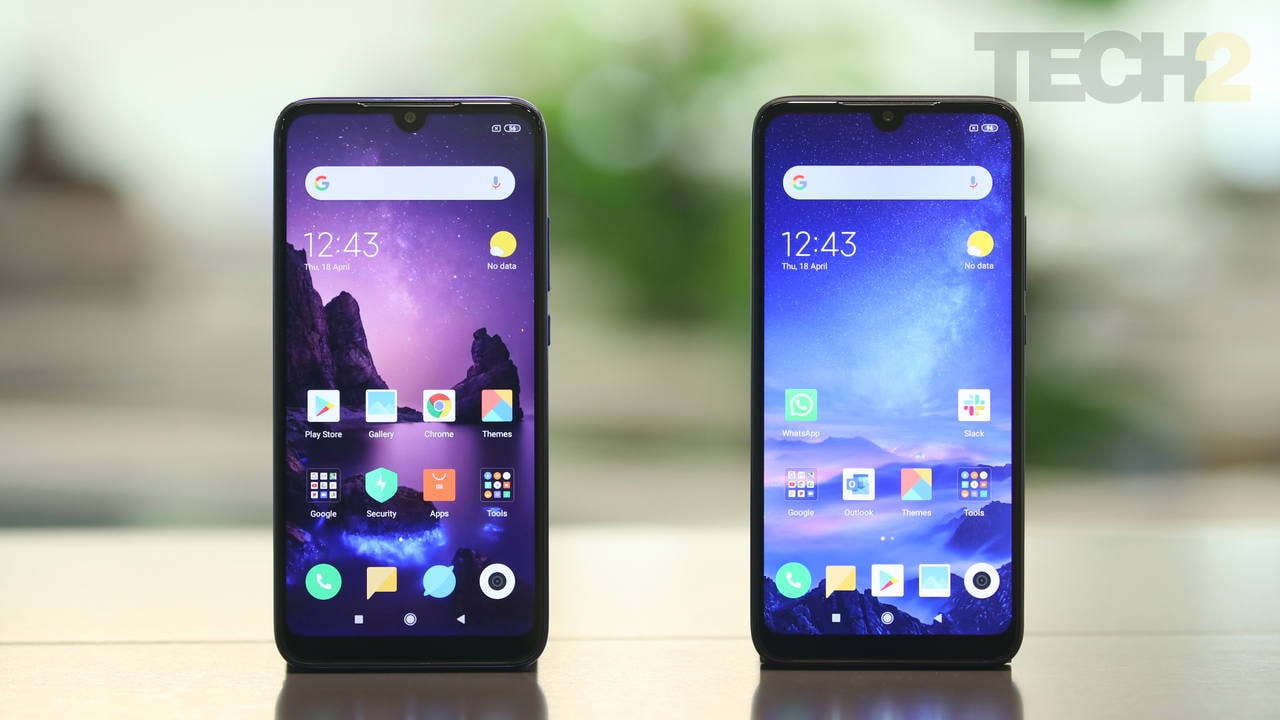 The phone certainly offers everything you'd expect in a sub-Rs 10,000 smartphone - good cameras, a capable chipset, two-day battery life and an appealing design. Apart from the average display and ad-laden software experience there very little to complain about here.

However, if you do seek a more premium-looking smartphone with a better display, the Redmi Note 7 does offer better value. The Note 7 also offers a marginally superior Snapdragon 636 SoC, though the Redmi Y3 does offer a far superior front camera.

For those who prefer an ad-free, stock Android software experience in a sturdy, premium-looking package, we also suggest you look at the Nokia 5.1 Plus which currently retails for Rs 10,599 in India.

Redmi Y3 to go on sale on Amazon and Mi.com at 12 pm today: All you need to know