Holiday season shoppers shunned Windows 8 desktops and notebooks in favour of tablets and smartphones, resulting in a 4.3 percent fall in PC sales in the fourth quarter, research firm Gartner said.

Holiday season shoppers shunned Windows 8 desktops and notebooks in favour of tablets and smartphones, resulting in a 4.3 percent fall in PC sales in the fourth quarter, research firm Gartner said on Monday.

Worldwide PC shipments declined to 90.3 million units in the last three months of 2012, Gartner said, indicating that the sector was suffering from a shift in consumer habits as much as a weak global economy.

"Tablets have dramatically changed the device landscape for PCs, not so much by 'cannibalizing' PC sales, but by causing PC users to shift consumption to tablets rather than replacing older PCs," said Mikako Kitagawa, principal analyst at Gartner.

"Whereas as once we imagined a world in which individual users would have both a PC and a tablet as personal devices, we increasingly suspect that most individuals will shift consumption activity to a personal tablet, and perform creative and administrative tasks on a shared PC." 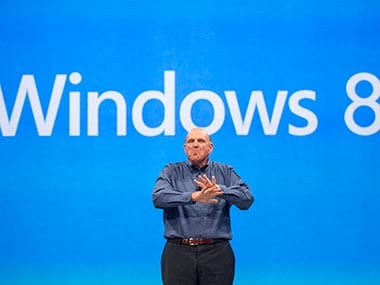 Microsoft CEO Steve Ballmer at the launch of Windows 8 in this file photo.AP

The industry was hoping that the latest version of Microsoft's Windows, released in October, would revitalise a sector which had been buffeted by competition from tablets and smartphones over the past year.

But Gartner said the new operating system did not have a significant impact on PC shipments in the quarter, in part because the first Windows 8 devices lacked the excitement of the touch interface found in tablets.

Hewlett-Packard regained the top spot from China's Lenovo Group in the quarter, Gartner said, thanks to its strength in the consumer market, which is a stronger driver than corporate sales in the holiday season. However, the Silicon Valley company's shipments did not grow compared to a year ago.

Despite losing the top spot, Lenovo recorded the strongest growth of the top manufacturers, with a 8.2 percent rise in shipments on a year ago.

Dell was in third place, although its sales fell 21 percent year-on-year, while Acer, down 11 percent, was in fourth position.

Windows PC sales in US down 21% in Nov: report

Windows PC sales in US down 21% in Nov: report

Windows 8: How to upgrade and what your PC must have