Samsung Galaxy S10 set to debut on 20 February: Here's what we know

From Infinity O display to in-display fingerprint sensor, here's all you need to know about Galaxy S10

Samsung’s major event is just a few days away where the tech giant will introduce the Galaxy S9 series follow up, the Galaxy S10. The Galaxy S9 and the S8 were among the best smartphones in the premium lot. But this year marks the tenth anniversary of the first premium Galaxy S, and similar to what Apple tabled out two years back in its iPhone X, Samsung is expected to showcase something quite radical like the foldable phone at the Galaxy Unpacked stage.

Ahead of the Galaxy S10 series’ formal launch, a plethora of leaks, have revealed the devices’ design, innards, software etc. While Samsung brought two variants under the flagship Galaxy S series last year, the company is widely anticipated to announce three different S10 models including a lighter version, the Galaxy S10 Lite/Galaxy S10e as well. The new Galaxy S10 series (except the Galaxy S10e) is rumoured to feature to an ultrasonic in-display fingerprint sensor.

We have compiled the list of rumours, leaks and rumours to help you find everything that you need to know about the new Samsung Galaxy S10 flagship series.

Samsung Galaxy S10 is expected to boast a new ‘industrial design’ this year. Leaks suggest that three Galaxy S10 models will feature slimmer bezels and an edge-to-edge display as compared to the previous iteration. The smartphones are anticipated to sport the native infinity O-style display with a small cut out for the front-facing camera lens. Additionally, reports point out that the Galaxy S10 might replace the built-in speaker and rather feature a sound-emitting screen, which is a technology used on the Vivo Nex, 2019 Vivo Apex and the new Meizu Zero. All the three models are expected to flaunt glass-encased body with a metal chassis. Leaked live images from AllAboutSamsung last month revealed the Galaxy S10 and S10 Plus housing USB-C port and a 3.5mm audio jack (thankfully). Interestingly, Samsung might add a bright and garish coloured variant called 'Canary Yellow' to one of its flagship phones this time, as per a report.

As for the front panel, Samsung Galaxy S10 and Galaxy S10 Plus could feature a 6.1-inch and 6.44-inch curved Super AMOLED display respectively. Meanwhile, the Galaxy S10e is said to sport a 5.8-inch flat Super AMOLED screen.

In terms of internal hardware, the new Galaxy S10 series will get similar treatment as the previous Galaxy S premium series. The smartphones will carry Qualcomm’s latest high-end silicon, the Snapdragon 855 SoC or the proprietary Exynos 9820 chipset depending on the region. Both Snapdragon 855 and Exynos 9820 processor offer dedicated AI, which means it will allow the smartphones to handle myriad tasks including image processing smoothly and likely enhance Bixby Vision performance as well. Notably, the in-house Exynos 9820 features NPU (neural processing unit) for machine learning tasks.

As for the RAM and storage, both Galaxy S10 and S10 Plus are tipped to have two configurations- 6 GB RAM/ 128 GB storage and 8 GB RAM/ 512 GB storage. Meanwhile, the lite version Galaxy S10e is said to come in single 6 GB RAM and 128 GB storage version.

This time around, Samsung is tipped to bump up the camera modules and the resolution on the new Galaxy S10 series. As per reports, the Galaxy S10, and Galaxy S10 Plus will feature triple camera setup at the back comprising of a 12 MP primary sensor, a 16 MP secondary sensor and a 13 MP 2x telephoto zoom lens with an f/2.4 aperture. If leaks are to be believed then the Plus variant might have front-facing cameras. Meanwhile, the Galaxy S10e will have dual rear cameras consisting of a 12 MP + 16 MP setup. The high-end models will feature the signature variable aperture that allows the devices to change the aperture of the lens depending on the varied lighting condition. 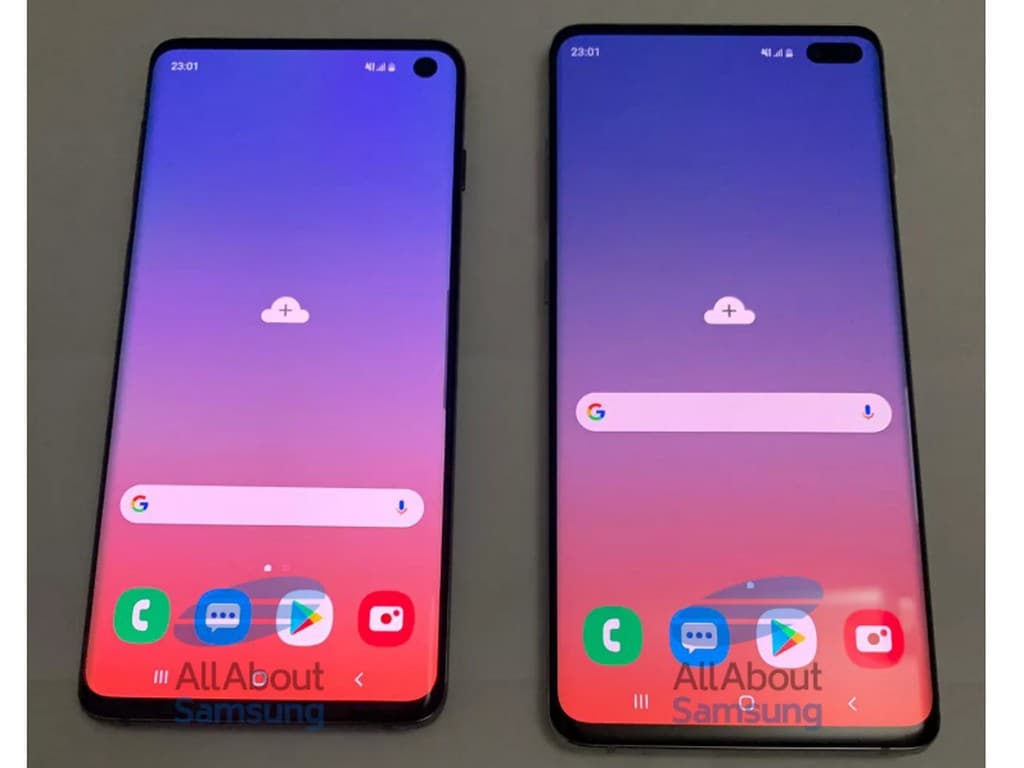 Reports suggest that the Galaxy S10 could be the first phone to feature a 3D mapping camera sensor. The sensor is said to assist the device's augmented reality features and offer somewhat improved versions of Galaxy S9’s AR Emojis. Another interesting feature rumours point towards is the implementation of Google’s Night Sight like feature, dubbed as Bright Light. Apparently, the feature was spotted in a One UI camera APK teardown.

As for the native camera features, reports hint at an ‘Artistic Live Focus’ that will offer granular control over the level of background blur and more creative uses of motion. Folks at XDA Developers suggest that the camera could support 1080p slow-mo video recording, HDR10+ video content as well. The report adds that the camera could enable making a part of the picture black and white and support a host of effects and features as well.

On the software front, all the three models are expected to run Android 9 Pie OS based on Samsung’s new custom One UI. Samsung is believed to announce major update to its in-house voice-based assistant Bixby at the event. Apparently, the company could add a native cryptocurrency wallet in the Galaxy S10 (perhaps for the US variants) as well. Tipster Ben Geskin last month shared a screenshot of the purported Galaxy S10 running a “Samsung Blockchain KeyStore.” The new Galaxy S10 series is expected to include improved health apps as well.

As for the availability, reports claim that the Galaxy S10 series will be released on 8 March in global markets.

Besides unveiling the premium Galaxy S10 flagship series of the year, Samsung reportedly confirmed to showcase its foldable phone, dubbed as Galaxy F at the event. The foldable phone was briefly unveiled during the company’s annual developer conference in November last year. The phone is rumoured to feature a 7.3-inch OLED panel. In addition, Samsung could introduce a 5G capable Galaxy S10 X smartphone at the standalone event as part of celebrating its tenth anniversary.

Samsung is expected to showcase Galaxy Buds at the event. Image: WinFuture.de

The Galaxy S10 X is expected to sport a tall 6.7-inch Super AMOLED display, quad cameras at the back, a 5,000 mAh battery and a massive 12 GB RAM, 1 TB of internal storage. The smartphone is said to launch later on 29 March.

Among other announcements, Samsung is expected to launch Galaxy Watch Active smart wearable and Galaxy Buds at the February 20 Galaxy Unpacked event in San Francisco.