Flagship processors, 64MP camera, premium brands and more ― you get a wide range of features in smartphones under Rs 25,000 this month.

A budget of Rs 25,000 is one where people start expecting flagship features and performance from their smartphones and rightly so. The options that are available for purchase in that budget this month won’t disappoint most. You get phones with last generation flagship processors, 64 MP camera, quad cameras, full-screen display and more under 25K.

What’s more, we have more than one Samsung handset in the list today! I cannot remember another instance of that in any of our sub-25K price lists. So let’s see what we have for you this time.

With the price of Redmi K20 Pro jumping to 27K and Poco X2 perpetually absent, the Redmi K20 is the next best option from the company in this budget. It has the same eye-catching design and a glass body that you get on the Pro model. The phone is powered by Qualcomm’s potent mid-range chip Snapdragon 730 and comes bundled with 6 GB RAM and 128 GB storage. It has a 6.4-inch Full HD+ all-screen AMOLED display protected by Corning Gorilla Glass 5. You also get an in-display fingerprint scanner and a 20MP pop-up selfie camera to go with it. The Redmi K20’s cameras are quite impressive too. You get a triple camera setup with a 48MP primary camera with Sony IMX582 sensor, 13MP ultrawide camera with 125-degrees FOV, and an 8MP telephoto lens that gives you an option of 2X optical zoom. They manage to capture excellent images in varied lighting conditions. A 4,000 mAh battery keeps the phone powered for over a day of moderate usage.

The Redmi K20 launched with Android Pie and MIUI 10. The company has started rolling out an Android 10 update for the device with MIUI 11 since the start of this year. If your device still has Android Pie, look for a new system update in the phone settings.

Realme X2 (First impressions) offers some great features that compete hard with the Redmi K20. In fact, it not just competes but tries to go one better at a good 20 percent lower price point. The similarities begin with the Snapdragon 730G chip that powers it, and here too you get 6 GB RAM and 128 GB internal storage, but you also get an option to expand it further with a microSD card; something lacking on the K20. This phone also flaunts a glass back protected by a layer of Corning Gorilla Glass 5, and the protection extends to its sharp 6.4-inch Super AMOLED Full HD+ display with a drop notch. 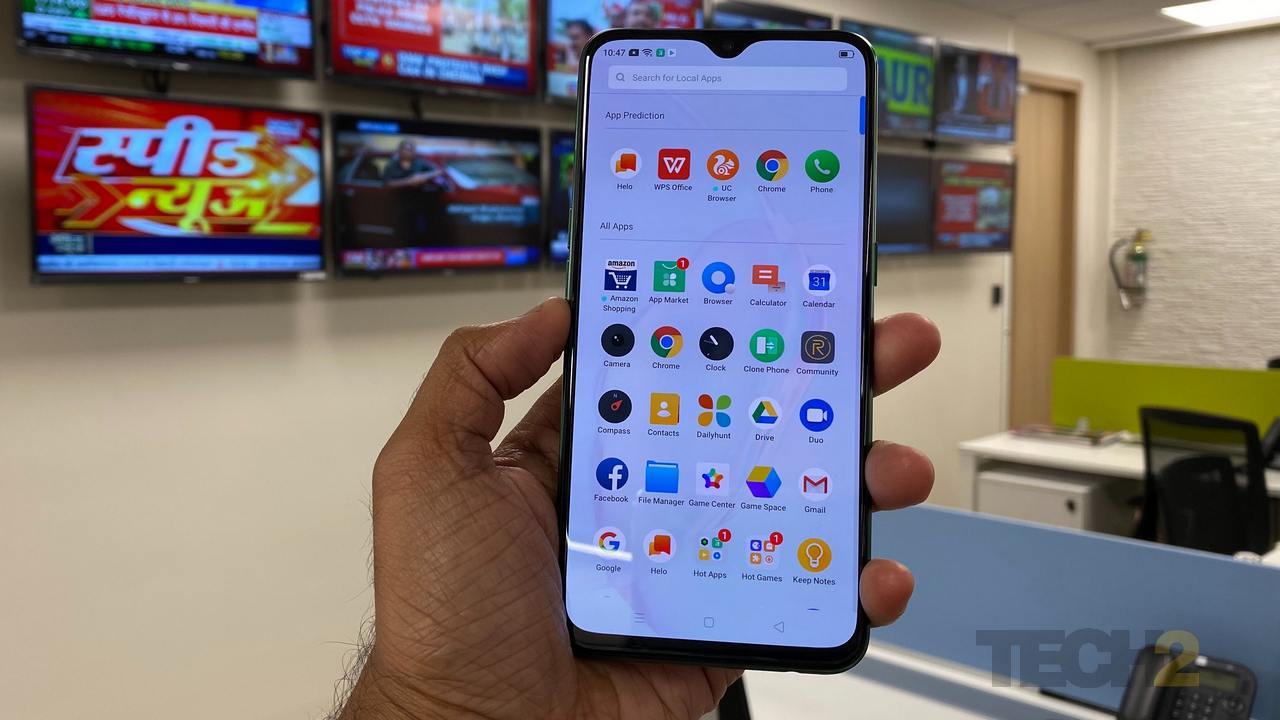 The Realme X2 has a quad-camera setup at the back consisting of a 64MP primary camera, an 8MP ultra-wide shooter, 2MP dedicated macro camera and a 2MP depth sensor. No optical zoom here. The main camera captures some impressive 16MP images with the help of pixel binning in varied lighting conditions including low light. The images have a good amount of detail along with natural colours. There’s a 32MP camera up front for selfies and video calls.

A 4,000 mAh battery keeps the phone powered for over a day of moderate usage. But even better, the bundled 30W VOOC 4.0 fast charger juices it up quickly. This phone has an in-display fingerprint scanner and runs Android Pie with Color OS 6.0 UI. An Android 10 update with the new Realme UI has already started rolling out. You do get an 8 GB RAM variant of this phone in this budget, but we feel it’s an overkill on this device and would recommend the 6 GB version itself with 128 GB storage.

While Redmi and Realme lock horns for bragging rights in this segment, the Honor 20 technically has the fastest SoC in this budget. It has an equally classy design with a 6.26-inch Full HD+ display and an in-display punch-hole front camera. The Honor 20 is powered by Huawei’s previous flagship Kirin 980 chip and comes bundled with 6 GB RAM and 128 GB storage at a very competitive price. It runs Android Pie. Android 10 update with Magic UI 3.0 started rolling out a couple of months ago for this phone.

Camera department comprises of four cameras at the back with a 48MP primary sensor, 16MP ultrawide camera, 2MP macro camera and 2MP depth sensor. The rear cameras do a very good job in different lighting conditions. Its 3,750 mAh battery provides ample power for a day of moderate usage, and the company bundles a fast charger that can take the battery from 0 to 50 percent in under 30 minutes. The Honor 20 gives you hardly any reason to complain at this selling price.

This is one of the most common queries we have been getting over the past few weeks. So here are a couple of smartphones from a non-Chinese manufacturer that you can buy under 25K. No surprise, both are from Samsung.

The Samsung Galaxy A51 (Review) may not match the processing power of other phones in this list, but it can still hold its own in the screen and photography department. This phone too has quad cameras at the back with a combination of 48 MP primary camera, 12 MP ultrawide, 5 MP macro, and 5 MP depth sensor. You can capture some high-quality photos from the primary camera, and its portrait and macro shots are particularly impressive. The 32 MP front camera will please the selfie enthusiasts too. The Samsung Galaxy A51 has an impressive display. It has a 6.5-inch Full HD+ sAMOLED display with excellent colour reproduction and a tiny hole for the front camera at the top centre. The phone is powered by Samsung’s mid-range Exynos 9611 SoC and comes with 6 GB RAM and 128 GB internal storage that can be expanded further with a microSD card. Its 4,000 mAh battery manages to last a day of moderate usage. The Samsung Galaxy A51 runs Android 10 out of the box.

Yes, the price is Rs 250 above our budget. But there are plenty of credit card offers and other cashbacks for this device on almost every major e-commerce platform in India, using which, you can get anything between Rs 300 to Rs 2,000 instant off on this handset, thus dropping its price well within this price range.

Would you prefer a Samsung phone with a more powerful Qualcomm SoC and an even bigger display? If the answer is yes, then Samsung Galaxy A70 (Review) is the phone for you. It has a massive 6.7-inch Super AMOLED Full HD+ screen with a drop notch and a resolution of 2400 x 1080 pixels. The display is sharp and vibrant with good sunlight legibility too. It also has a larger 4,500 mAh battery that comfortably lasts over a day of moderate usage. Contributing to the long battery life is an efficient yet fairly powerful Snapdragon 675 SoC (though not as powerful as the Snapdragon 730 and Kirin 980 above). Here too you get 6 GB RAM and 128 GB of internal storage that can be expanded further up to 1TB. There’s a triple camera setup at the rear with a combination of 32 MP f/1.7 primary sensor, 8 MP 12mm ultra-wide lens and a 5 MP depth sensor. They do an excellent job in bright conditions but the low light performance is average. Just like the A51, there’s a 32 MP camera up front to woo the selfie enthusiasts. The Samsung Galaxy A70 runs Android Pie with One UI on top. A stable Android 10 update for this phone has started rolling out again last month after some initial hiccups.