Not a power-packed smartphone

Last month, Samsung launched a new A-series smartphone in India – Galaxy A51. The A-series of phones cater to the mid-budget segment, and so does this smartphone. It's priced at Rs 23,999, and its highlights are its 48 MP quad camera setup and 4,000 mAh battery.

In this price segment, the Galaxy A51 competes directly with the Redmi K20 Pro (review), Redmi Note 8 Pro and Oppo F15 (review).

While the F15 is mostly design and no substance, the K20 Pro is a powerful device, and the Galaxy A51's closest competitor.

So, does the Galaxy A51 prove to be a better pick over the K20 Pro? Is it a good daily driver? Is it a power-packed device, unlike its other A-series siblings? I used the smartphone for a week in my quest to answer to all these questions. The vibrant colours and brightness, as well as the size, mean that the A51 is very handy when consuming video on the go.

The sunlight legibility of the Galaxy A51 is really good. You won't be squinting your eyes to read text or view a photo on the phone.

The auto-brightness on the phone, however, messes up sometimes. In brightly lit indoor settings, the phone sometimes keeps shuffling between low and high brightness, making it really irksome for the user. 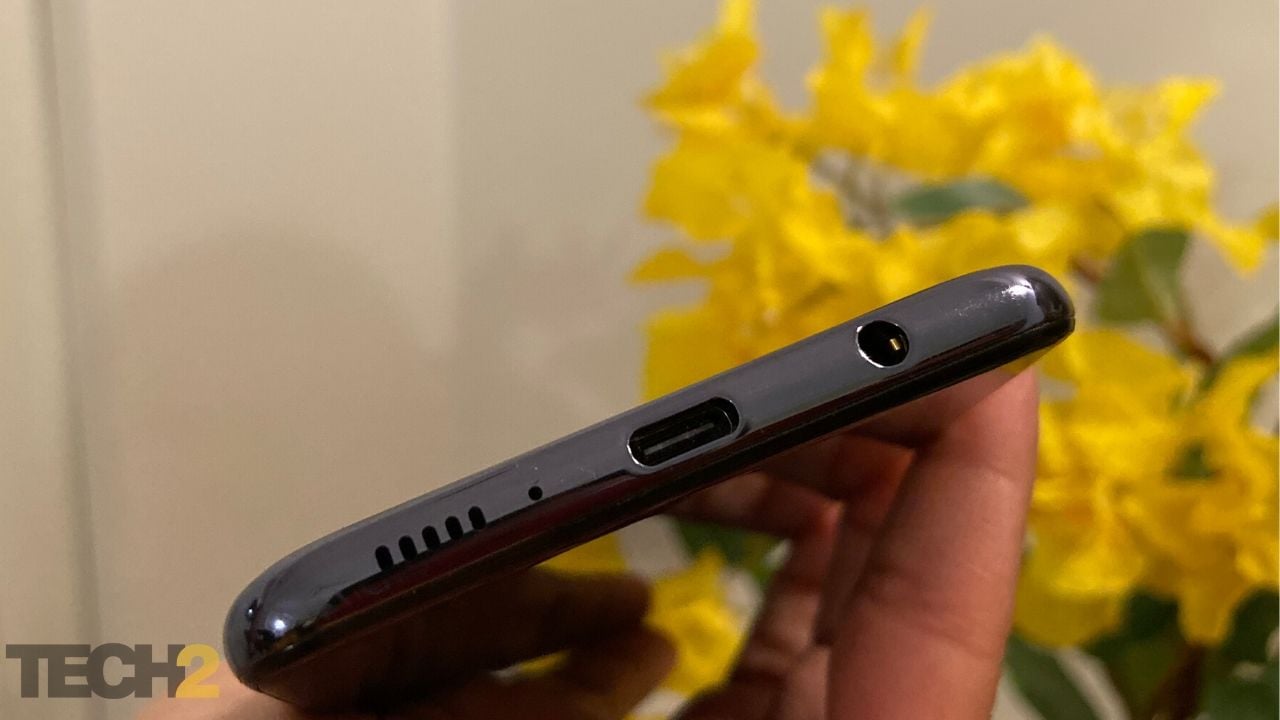 Samsung Galaxy A51 has a Type-C connector. Image: tech2/Nandini Yadav

Samsung Galaxy A51 is sleek and really light

Samsung Galaxy A51 doesn't really have a design that stands out, at least at first glance. However, when you pick it up in your hand the first time, you'd realise how light the device is – that's despite a 4,000 mAh battery under the hood. It weighs 172 gm.

The smartphone is also really sleek, which gives you a good grip even with that glossy back. The rear of the Galaxy A51 looks like glass but feels like plastic (not the cheap kind for sure though), and that's because Samsung has used a material they call "glasstic" for the phone's back. 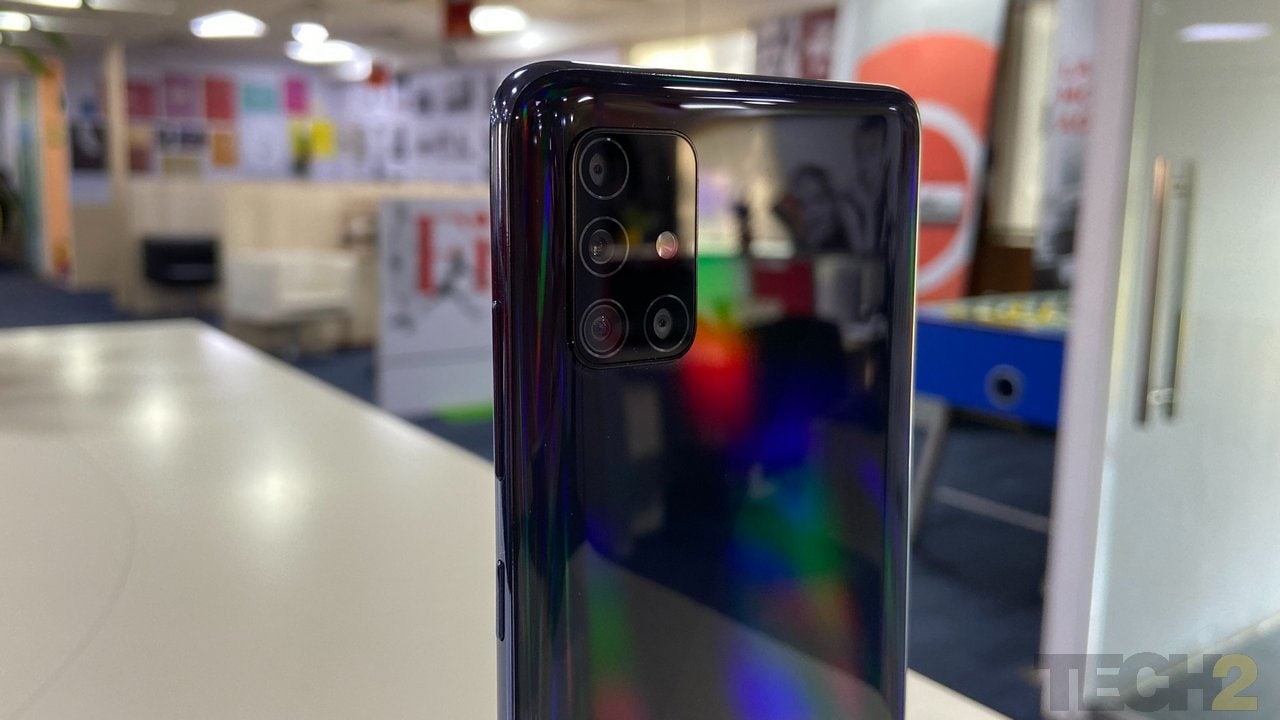 I used the phone for two weeks, and I was carrying it in my bag, which has keys and lipsticks and chargers and my wallet, all of which can easily scratch a phone. However, the Galaxy A51 lived through all of this without any scratches on its back at all.

Smudges, however, were like clothes to the device I was using. It was wearing them at all times. But the phone comes with a silicon case, which can save the phone from scratches and smudges in the long run.

The variant I reviewed comes in black, which is the most boring of the lot. There is a blue variant that you must lookup.

Also bundled in the box is a pair of earphones, which are made from plastic, and these for sure feel cheap. The sound quality of these earphones is also quite poor. Essentially, they are just functional earphones that you can use as a backup.

In daylight, the smartphone clicks great pics, with good colour balance and exposure. The pictures also maintain a lot of natural details. I also loved the edge detection in the portrait mode in the rear camera. It's really precise and does not weirdly blur out the unruly baby hair around your face. Portrait images look very natural.

Selfies, for which the camera uses a 32 MP lens, are also quite good, but with the beauty mode switched off too, you will see the phone softening the focus a little. The images aren't as sharp as what you get on the front camera. 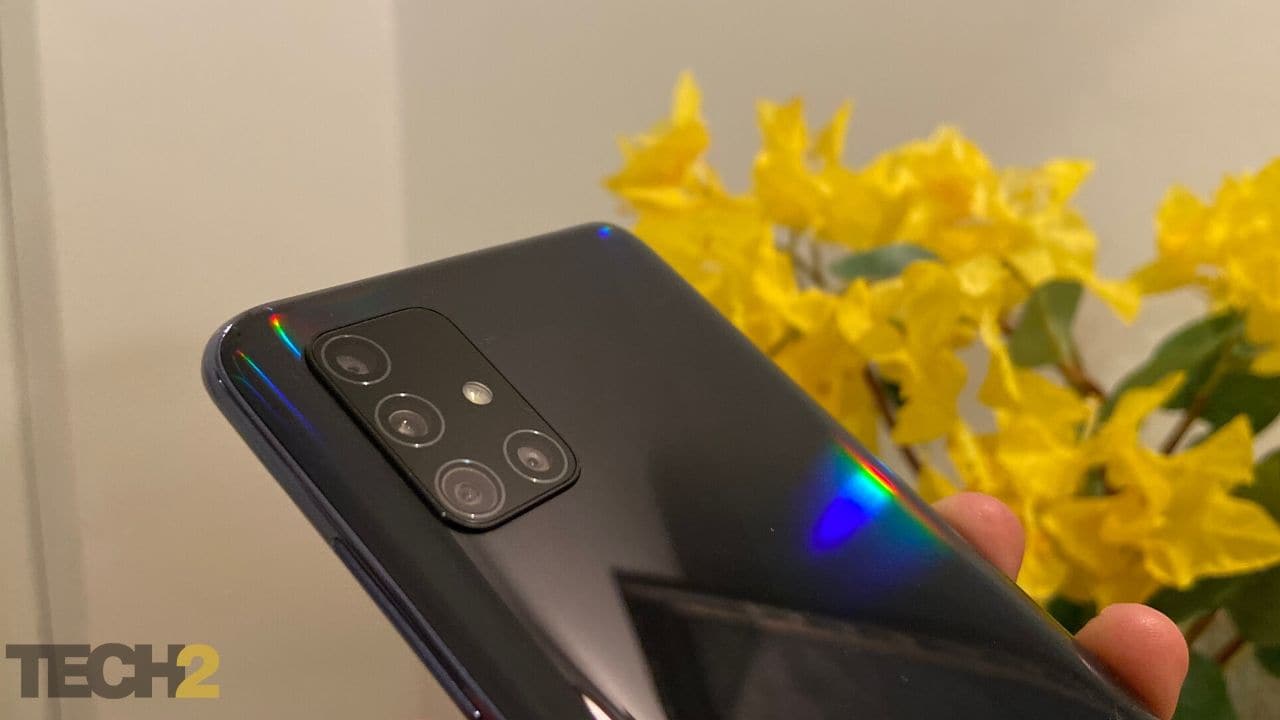 Samsung Galaxy A51 has a quad-camera setup at the back. Image: tech2/Nandini Yadav

The Galaxy A51 lets you shoot 2160p videos at 30 fps and 1080p videos at up to 120 fps. The video quality is good too, with good colour balance, and also decent stabilisation. However, this stabilisation somehow doesn't work well when taking still images. You can't get a clear image if you're in a moving vehicle or your hands are shaky.

When it gets dark, the A51 really struggles. Selfies taken at night are grainy and show poor colours. The exposure is also poor with hardly any details visible in the background. If you see the images in the Flickr album below, you will notice that in some night-time selfies you can barely separate the dark background from my hair.

Night photography from the rear camera is better than that of the selfie camera, but it's still, at best, functional.

Check out all the camera samples clicked from the Galaxy A51 below. Good daily driver, decent for gaming, but not entirely lag-free

The phone's performance is smooth for day-to-day tasks like multitasking between social media apps, watching a video and sending emails. When playing games too, the phone runs on medium settings and works fine at most times, however, I noticed frame drops a few times while playing Asphalt 9 on the device 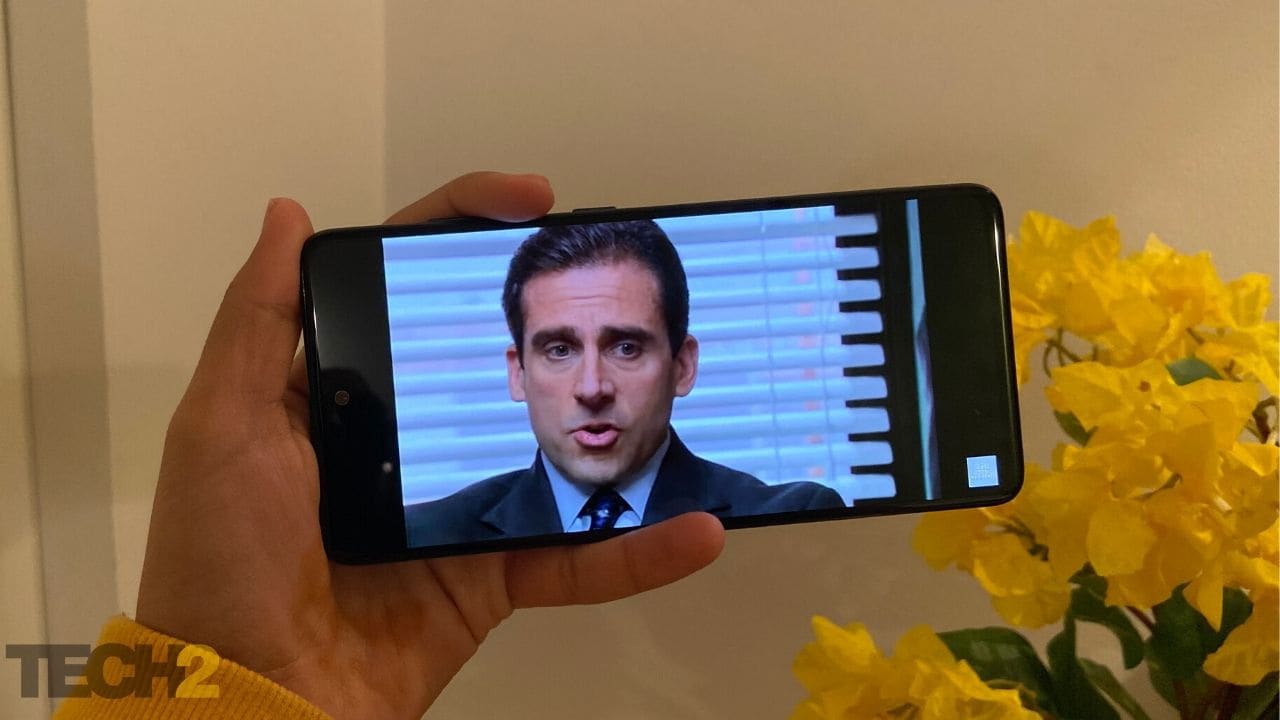 The Office playing on Samsung Galaxy A51. Image: tech2/Nandini Yadav

I also experienced lag a bunch of times in the Gallery app. While scrolling through the pictures, the app just freezes at times.

Facial recognition on the phone isn't too great. It's really a hit or miss affair. The in-display fingerprint sensor, I found, is a much better option. It works faster (as long as you put your registered finger flat on it). The fingerprint sensor also works when your hands are a little wet.

Call quality isn't too great on the device. Though sometimes I do hear an echo, which makes it tough to understand the caller at times.

The speaker is quite loud, but it's also a bit shrill.

Fully charged, the phone easily lasts close to two days if you use it for simple day to day tasks like using social media apps, making notes, and answering calls.

However, if you watch too many videos, your battery life may come down to a day. That may become even shorter if you play graphic-heavy games for extended periods of time. The Galaxy A51 runs on the Android 10-based One UI 2.0 and comes with Samsung Knox for security. The phone also comes with Samsung Pay support, which lets you just tap and pay at stores instead of carrying your credit and debit cards.

One UI 2.0 is quite an improvement over its first version. The phone has a more intuitive keyboard, with automatic multilingual input detection. The Messages app has also been improved with a feature called 'Useful Card' which 'smartly' detects the latest offers coming up and events happening around you and rearranges their order as per their validity.

TL;DR: Buy it for daily tasks, and if you like the looks. Ignore if you're looking for power

The Samsung Galaxy A51 looks quite good, especially in blue. It has a premium design. The phone also has a good day camera, but it struggles a bit with night photography. The battery of the phone lasts long and charges reasonably fast.

The phone performs well, lets you game at medium settings, but the experience isn't lag-free. The UI of the Galaxy A51 is intuitive and smooth.

Versus the competition, the A51 isn't so bad. The A51 does lose out in the gaming department and its night camera isn't as good as the Redmi K20 Pro, but whether that matters to you or not is for you to decide.

When we come back to the question of it being better than the competition, then Galaxy A51 may only lose in the gaming department and a little in terms of night camera with the Redmi K20 Pro.