After disrupting the flagship segment of smartphones with the Realme X2 Pro (Review), the Chinese manufacturer is setting its sights in the mid-range segment with the X2.

The Realme X2 already launched in China back in September, followed by Europe in October. And now, it has entered the Indian market. Borrowing many of the highlights from its flagship sibling, the Realme X2 offers powerful hardware for its segment in a premium design similar to its more powerful sibling. Here’s a quick hands-on experience with the upcoming mid-ranger from Realme. While the design of the X2 isn’t a complete departure from the X2 Pro, there are subtle changes to the body. For instance, the placement of the speakers, USB-C port, and headphone jack on the bottom is a mirror image of the X2 Pro’s design. The SIM card slot is on the left, compared to the X2 Pro. Although these are minor changes, the most noticeable difference has to be the location of the rear quad-camera system. You’ll find the rear quad-camera array on the top left of the phone whereas the X2 Pro had them centrally located.

The number of colour variants is limited to three options including Pearl White, Pearl Blue and Avocado Green. We received the third variant and I’ll admit, the green gradient pattern on the rear glass panel looks beautiful.

The X2 has a smaller display at 6.4-inch with a water-drop notch on the top. For security, it uses an in-display fingerprint optical sensor.

Gorilla Glass 5 is present on the front and back for protection with a plastic frame in between. The presence of plastic doesn’t cheapen the build quality of the device and there’s hardly any flex. Holding the phone while watching videos or taking calls feels premium. It doesn’t feel too bulky. I spent only an hour or two with the Realme X2. Powered by the Qualcomm Snapdragon 730G, it was expected that the phone won’t display any kind of stuttering or lag when opening or switching apps. It doesn’t come with a 90 Hz display like the X2 Pro, which would be too much anyway. But navigating across ColorOS 6.1 feels smooth.

Our variant packed 8 GB of RAM and 128 GB of internal storage. An additional benefit with the X2 is the provision of expandable memory via a microSD slot if you think 128 GB won’t be enough for you.

Just like the X2 Pro, it comes with a 4,000 mAh battery capacity. However, the insanely fast SuperVOOC Flash Charge is missing. Instead, it packs the regular VOOC Flash Charge 4.0 at 30 W. The company claims that it can charge the device to 67 percent in 30 minutes. We will be putting this claim to test in our full review. 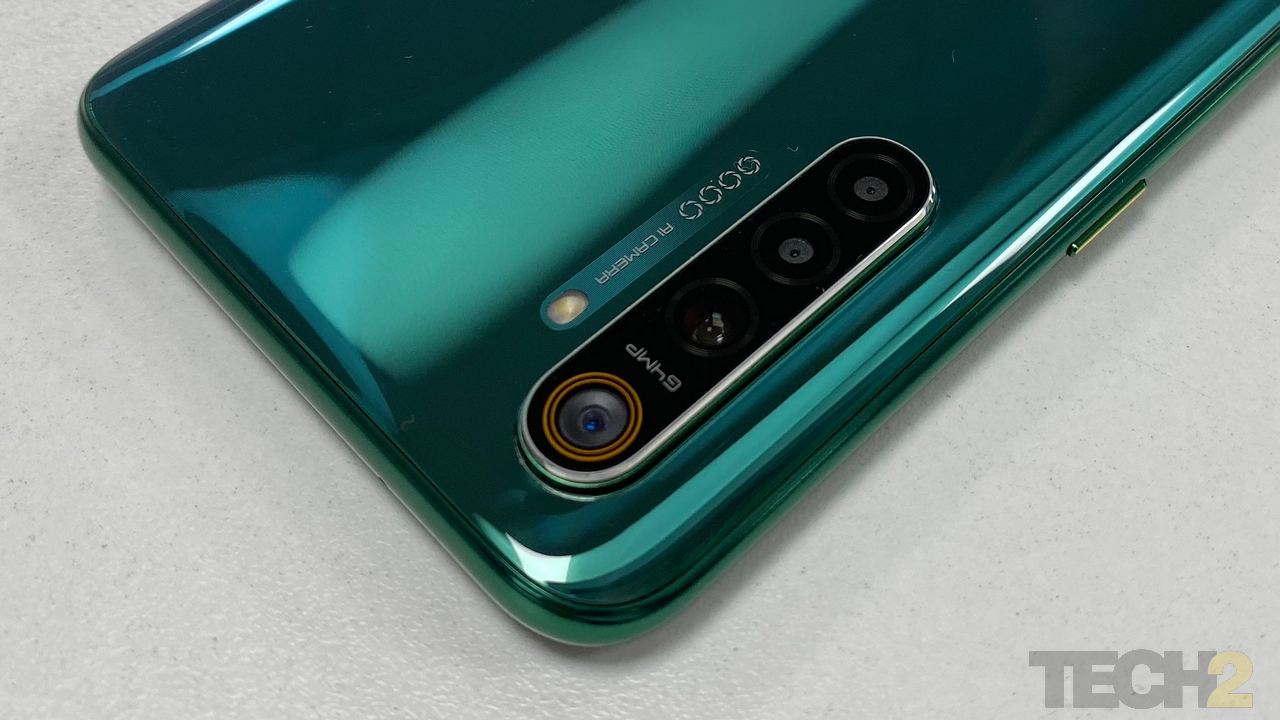 The rear quad-camera system is almost the same as the X2 Pro. However, instead of the 13 MP telephoto lens, the X2 adds a dedicated 2 MP macro camera lens. I took several shots with the phone in daylight with clear skies. It captures good details with the primary camera and the software tries to balance the colours and saturation. For instance, in some of the pictures I clicked, the sky looked saturated even though the other areas weren’t. They seemed to look washed out at times. Further testing is required in different conditions to actually figure out what the camera is trying to achieve.

The Realme X2’s portrait mode is decent and it manages to maintain a close-to-natural skin tone. However, the colour temperature changes when you’re taking shots in the normal and portrait mode, the latter being warmer.

I couldn’t test out the camera in low-lighting conditions. It comes with a night mode called Nightscape and its results will be reserved for the full review. With the kind of hardware it packs, the Realme X2 sounds like an all-rounder already. Add to it the camera arrangement on the rear, and it appears to be quite flexible. In the couple of hours that I used the device, I didn’t find anything glaring to point out. This is, of course, without any rigorous testing of battery life and gaming performance.

For now, it does seem attractive with its starting price of Rs 16,999 for 4 GB + 64 GB variant. However, I used the 8 GB + 128 GB variant and there shouldn’t be much of a difference in performance between them apart from multi-tasking.

I'll be using the Realme X2 over the week, so stay tuned for a full review.

Realme X2, Realme Buds Air to launch in India today at 12.30 pm: How to watch it live

Realme X2 Pro with Snapdragon 855+, 90 Hz refresh rate to be announced in India on 20 November