Despite competitors like the Honor 10 the OnePlus 6 should still easily be the smartphone to beat in the price range given the features it boasts.

Easily one of the most anticipated smartphones launches for this month, the OnePlus 6 has finally been launched globally and will be launched in India later today. 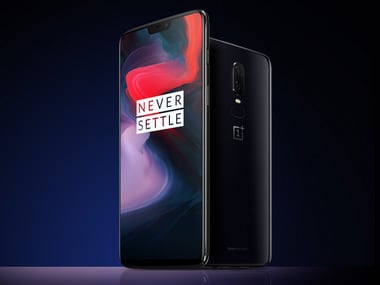 The OnePlus 6 is going to be launched in India later today. Image: OnePlus

We are not sure which variants will make its way into the Indian market but the OnePlus 6 officially has a total of three variants – a 6 GB RAM/ 64 GB storage, 6 GB RAM/ 128 GB storage and 8 GB RAM/ 256 GB storage. The phone has been priced starting at $529 for the base variant and caps out at $629. Translating these prices directly to Rupees and we are looking at an approximate price range between Rs 36,000 and Rs 43,000. Given OnePlus' generally aggressive pricing in the Indian market, the figures could vary a little bit, give or take Rs 2,000.

OnePlus has over the years dominated the Rs 30,000 to Rs 40,000 range in the Indian market, having earned the popular tag of being an "affordable flagship" rather than what OnePlus likes to call a "Flagship Killer". But this year, we have seen a number of major phone makers such as Honor, Motorola, Nokia and even Samsung coming up with compelling devices in the under Rs 35,000 bracket. That said, the OnePlus 6 would still easily be the smartphone to beat in the price range given the features it boasts. An optic AMOLED 6.28-inch HD+ display, 6 or 8 GB RAM, a dual-camera setup with OIS and 4K video recording at 60 fps as well as a flagship Qualcomm Snapdragon 845 SoC. You could say that the OnePlus 6 is packed to the gills when it comes to the competition.

We picked up a couple of last year's flagships in the Nokia 8 and Moto Z2 Force for our comparison as well as the just-launched Honor 10 which is priced at Rs 32,999 in India. The Honor 10 was definitely launched keeping the OnePlus 6 in mind and considering it does not stand much of chance in terms of hardware and raw power, it could be banking on its design to pull the trick off. To complete the list we also have the Samsung Galaxy A8 Plus which was launched earlier this year, taking the fight to OnePlus' older flagship, the OnePlus 5T.

Things would have been interesting had OnePlus kept the 5T around for longer, but the company generally does not keep their older flagships around in production. OnePlus has not confirmed this yet but with the 5T having been out of stock for weeks now, it is unlikely that OnePlus will continue to produce the phone.

This is, however, just a specifications comparison and real-world performance is bound to be different. For an in-depth real-world comparison do stay tuned for the full review of the OnePlus 6, as well as the Honor 10 before arriving at a final conclusion.

Honor 10 comparison: Honor's newest flagship goes up against its very own View 10, Samsung Galaxy A8 Plus, Nokia 8 and the Xiaomi Mi Mix 2

Samsung Galaxy A8 Plus Review: A premium mid-ranger with stunning looks and a great display that fails to match up to its competition

OnePlus 6 global launch to take place in London: Where and how to watch the event live