After plenty of waiting, LG’s V30+ smartphone is finally available for purchase in India. The V30+, which comes with additional internal storage over the standard V30 can now be purchased both in stores and online at Amazon India at Rs 44,990. First unveiled around the IFA Berlin, LG sure has taken its own sweet time to bring the V30+ to India. LG, like Google’s Pixel missed the festive season and has made its fans in India wait quite a bit, considering that most of its competitors in the premium smartphone segment have already launched their flagships in India.

Still then, LG has a couple of firsts on-board the V30+.

The camera, is the first on the market to offer an f/1.6 aperture lens. This is available only on the 16 MP lens which also happens to be the only one on the smartphone to offer autofocus (strangely, in 2017). While the 16 MP unit offers a 71-degree field of view, the second 13 MP unit (which skips on the autofocus system) goes with a 120-degree field of view. The front facing camera too has a 5 MP f/2.2 aperture 90-degree wide angle lens.

The LG V30+ also happens to be the only new smartphone on the block to offer MIL-STD-810G shock resistance. Meaning that it is this is smartphone has been drop-tested to military standards. Then there’s also the Hi-Fi Quad DAC which thanks to the Bang & Olufsen earphones is expected to deliver superior audio quality. The V30+ also happens to be one of the few flagships this year that still sticks to the 3.5 mm headphone jack.

Apart from the above, everything else is pretty-much the standard fair when it comes to premium smartphones.

The design looks similar to what we have seen with LG G6 in the past, with horizontally place dual cameras on the back along with fingerprint reader that’s sits below it. The design has been refined and now offers a more-rounded, Samsung Galaxy S8-like appearance with rounded corners that make for a pebble-like feel, using a metal frame that is sandwiched between two sheets of curved glass.

There’s a 6-inch QHD+ (1440x2880 pixels) FullVision OLED display sporting a pixel density of 638 ppi. Inside, you get the usual Qualcomm Snapdragon 835 platform paired with 4 GB RAM and 128 GB of internal storage. 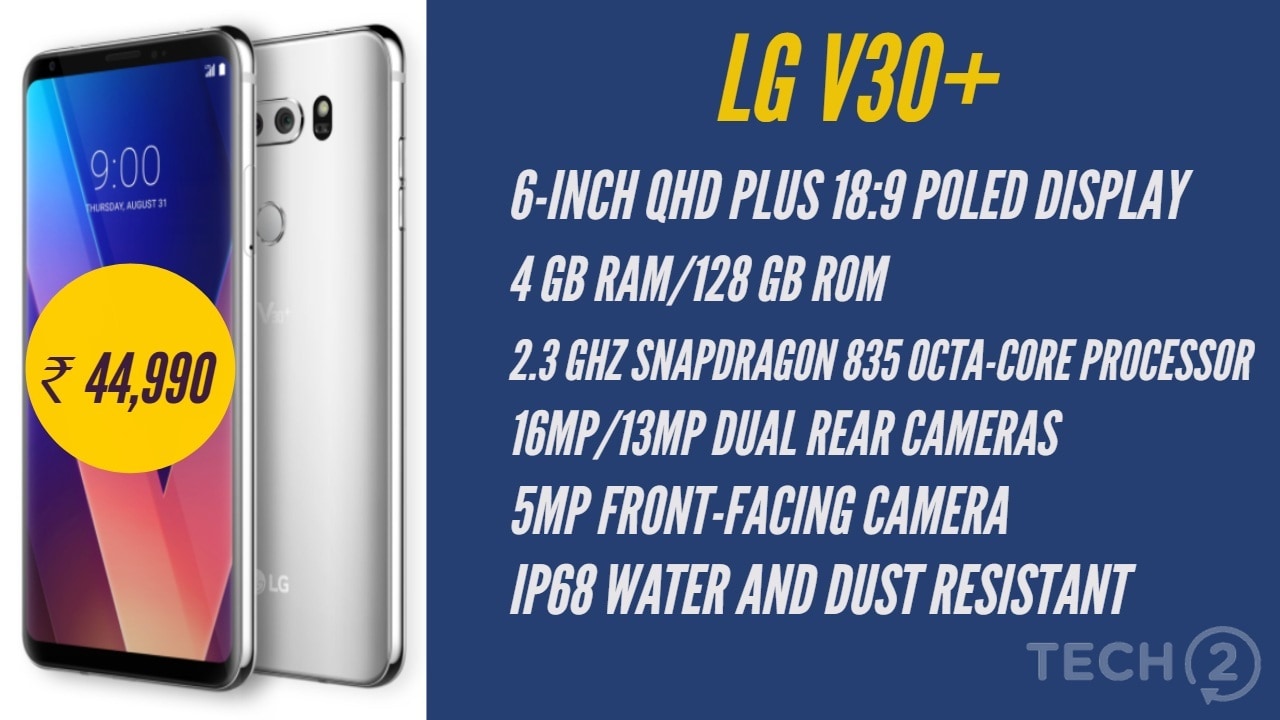 All of the above is powered by a 3,300 mAh battery and the handset runs Android 7.1.2 Nougat out of the box. LG has promised that Android Oreo update should arrive soon.

The LG V30+ will sit on store shelves alongside the Samsung Galaxy S8+, the Galaxy Note 8, the Sony Xperia XZ1, the Apple iPhone 8 Plus and its blood relative, the Google Pixel 2 XL.

LG V30 Plus is launching today: Here's everything you need to know

The LG V30 will feature the world's first f/1.6 smartphone camera lens; to debut in September