The call to boycott Chinese products in India is irrational, untenable, hypocritical, and ultimately, counter-productive.

Amid the growing India-China conflict, the rhetoric of boycotting Chinese products in India grows commensurately.

While we have seen the #BoycottChineseProducts trend previously, this time, China's intrusion at the Line of Actual Control is what fueled the ire of Indians. Sonam Wangchuk, the engineer turned educationist, was the first to call for a boycott late last month.

This sentiment has roots in India’s national movement to boycott British goods that took shape in pre-independence India. Many Indians threw away clothes made in Manchester. However, as is inevitable when living in British India, people were coming home to various products that were imported into the country from Britain anyway.

As a result of living in a globalised world, India imports and exports a lot of its products and raw materials from various countries. China happens to be one of the biggest exporters to India. Reportedly, in 2019, India and China’s bilateral trade stood at $92.68 billion, which is more than 60 percent of India’s total trade.

As per the Ministry of Commerce and Industry’s Export and Import data, in 2018-19, India’s electronic equipment import from China stood at $20.63 billion. This includes smartphones, TVs, features phones, white goods, among others.

The sentiment is not what’s under scrutiny here; the anger is just, but the practicality of a boycott is another matter. A man in Kolkata participating in protests against Chinese goods sold in India. Image: PTI

Is a boycott really the answer?

The irony of the boycott is especially ripe considering that among the top five smartphone brands in the country – the fastest growing mobile market – four places are occupied by a Chinese brands.

According to a May 2020 report by Counterpoint Research, in Q1 2020, Xiaomi had the highest market share of 30 percent in the Indian smartphone market, Vivo ranks second occupying 17 percent of the market, Samsung is at number three with 16 percent. Places fourth and fifth are also occupied by Chinese brands Realme and Oppo with 14 and 12 percent market share, respectively.

For the uninitiated, Vivo, Realme, Oppo, OnePlus are all owned by BBK Electronics, which is a Chinese MNC specialising in electronics. Xiaomi is also a Beijing-based company. No India-born brand ranks in the top smartphone sellers list.

However, for feature phone market share in Q1 2020, Lava and Micromax did make the cut to the second and fifth position, respectively.

It’s not just the pricing that makes the Chinese smartphone brands attractive in India – they have a rising graph when it comes to technology, which cannot be ignored. From being famous for just being a mass producer back in the 1970s, China quickly grew into principal designers for various technologies. For instance, China leads lithium-ion battery production with a 73 percent global manufacturing capacity share, followed by the US, far behind with 12 percent of global capacity.

Also, how do you really cut off ties with a particular country’s product in a globalised world, where a chip by Intel – an American tech company headquartered in California – is designed in China, manufactured in Taiwan, it’s PCB is assembled in Malaysia before going back to Silicon Valley?

While India has been pushing for local manufacturing of most products sold in the country, it is impossible – particularly in electronics – to pluck out every involvement of a Chinese company from the line of local production.

If this is the future we want, we must prepare ourselves for a very different experience as consumers in India. We may have to make peace with the vagaries of quality, or with sky-high prices for the next Apple iPhone or Samsung Galaxy flagship.

Chinese brands are trying to prove their 'Indian-ness'

Meanwhile, Chinese smartphone brands in India are playing it smart by playing-up their ‘Indian-ness’.

In his monthly Q&A video called AskMadhav, Realme India CEO Madhav Sheth addressed the issue of Realme’s roots that go back to Vivo-Oppo-OnePlus-owning BBK Electronics. He said that Realme is a global MNC, which started from India. He also said that Indians contribute nearly 50 percent to the Realme’s sales globally.

India-first products like AIoT devices, a 5G smartphone, and a 64MP smartphone camera, feature prominently among Realme’s recent launches. Sheth also reiterated that all Realme smartphones are manufactured under the ‘Make in India’ initiative. He insists that Realme is an Indian startup.

This ‘Indian’ startup came to be on 1 May 2018, when Oppo announced its sub-brand Realme in India.

Further, at the recent Xiaomi launch, India head Manu Kumar Jain announced that it now locally manufactures 99 percent of the smartphones it sells in India. He also said that Xiaomi employs more than 50,000 people in the country who are associated directly or indirectly with the brand, across different industries. Xiaomi says it employs over 30,000 people across its factories in India.

Poco also recently took to Twitter to talk about how it’s a Delhi-born brand. The company claims to be #POCOForIndia for life!

With a dream of serving Indian consumers, @IndiaPOCO was born 2 years ago in Delhi, India.

We took ahead the #MakeInIndia initiative by making products and services that are crafted for India.

In May 2020, Vivo also announced its new Make In India logo that it will be printing on smartphone retail boxes sold in India.

The employment that Chinese companies generate in India

The biggest impact of this boycott may be on the thousands of people that are employed by companies like Xiaomi, Vivo and Oppo in their factories in India.

Oppo, Realme and OnePlus smartphones are manufactured at a massive facility in New Delhi, which usually employs some 10,000 workers, but its workforce was cut down to 3,000 as per government orders due to the Coronavirus outbreak. At this facility, the BBK-owned brands assemble, test and distribute smartphones in the country, along with exporting some units to other countries.

Vivo has a separate factory in Noida, which employs some 2,000 people for assembling, testing and distributing its devices. Vivo also has a second factory, which was set up earlier this year, which has the capacity to employ 8,000 workers under normal working conditions.

Chinese companies play an important role in India being the second-largest mobile handset manufacturer in the world.

Under the leadership of PM @narendramodi, India has emerged as the 2nd largest mobile phone manufacturer in the world. In the last 5 years, more than 200 Mobile Phone Manufacturing units have been set up. #ThinkElectronicsThinkIndia pic.twitter.com/fGGeCRpj87

And it’s not just the employment generated in these factories. All through the value chain, there is indirect employment via retailers, marketing, public relations, advertisements, among other things. Vivo, for instance, has won title sponsorship for the IPL series for seven seasons (2016-2022), and will reportedly pay BCCI Rs 2199cr over a period of 5 years.

Is the Boycott working?

If you believe Twitter, any self-respecting patriot is echoing an anti-China sentiment.

Does he things we are fool? @realmemobiles come under BBK electronics, which is from China.#BoycottChineseProduct#BoycottChina#HindiChiniByeBye https://t.co/scBxHqngL8

Tensions between India and China following a deadly border clash are seeping into the wider public mood. Videos like this group of Indians destroying a Chinese made TV are trending under the hashtag #BoycottChineseProducts. pic.twitter.com/h8FSNi0ijQ

Those who want to be a part of the protest, here is a list of non-China brands of smartphones.#BoycottChina #BoycottChineseProducts #smartphones #mobile #cellphone https://t.co/YEbsPmCjH5

However, this echo does not seem to resonate in reality. Smartphone sales of Chinese brands are still going strong.

The OnePlus 8 Pro, which went on sale for the second time on 18 June, was sold out on Amazon India just a few minutes after the sale was live, the company confirmed to tech2.

Another OnePlus 8 sale was hosted on 22 June at 12 pm. As per OnePlus’ own website, the smartphone went out of stock within 8 minutes of the sale going live. A report by Economic Times also revealed that Vivo undertook a consumer study on 16 June through its ‘30,000-strong shop floor executives’, who said that there was no change in purchase patterns so far. The report also quotes ‘a senior executive of a leading e-commerce marketplace’ who confirmed that "there is no dip in sales of Chinese smartphones and electronic products."

The Xiaomi Mi NoteBook 14 series also went on sale for the first time on 18 June, and just a day later on 19 June, the Mi NoteBook 14 Intel/Nvidia models with 512 GB storage, were sold out on Amazon India. 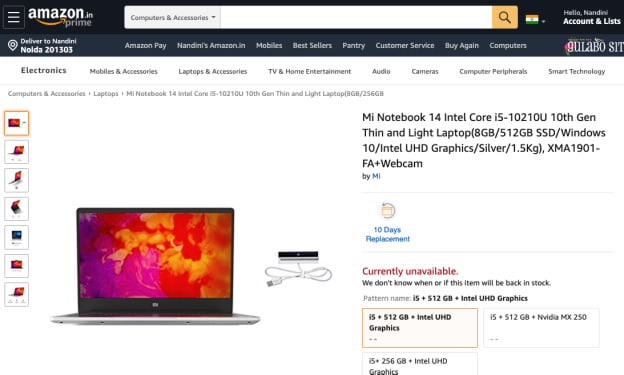 Screenshot was taken on 19 June, a day after the Mi NoteBook went on sale for the first time.

We also reached out to Pankaj Mohindroo, who is the CEO of India Cellular & Electronics Association, who confirmed that there has been “no impact” of the boycott on the sale of Chinese smartphones in India.

A trade war with China is certainly not desirable, says Telecom and Policies expert Arijit Sengupta.

He adds, “India is the only country that is not part of any trade deal. And if we do successfully boycott Chinese products, India will be on the losing end, especially in the telecom, networking, and various other industries where it relies on China for research and equipment at very low cost.”

What happens to the 5G dream?

Analysts believe that this move could increase gear procurement costs by 10 to 15 percent when sourcing from non-Chinese companies like Ericsson or Alcatel-Lucent.

What happens to Ola, Byju and TikTok?

Most startup unicorns in India like Ola, Paytm, and Byju have heavy investments from Chinese VCs such as Tencent.

As per a report by Gateway House, Chinese tech investors have put an estimated $4 billion into India’s leading start-ups. Reportedly, over five years ending March 2020, 18 of India’s 30 unicorns are now Chinese-funded. “TikTok, the video app, has 200 million subscribers and has overtaken YouTube in India. Alibaba, Tencent and ByteDance rival the US penetration of Facebook, Amazon, and Google in India,” the report reveals.

Boycotting Chinese products would mean deleting these apps and services from our (Chinese) phones as well.

A trade war with China is not the answer. Outraging on social media about boycotting a country and its product is lush with irony, considering the very devices the tweets are posted from are almost entirely Chinese. While India has been actively pushing for local brands to emerge and creating opportunities for global brands to set up manufacturing and increase production in the country, it’s not ready to declare itself entirely self-sufficient just yet.

A boycott isn’t a simple restriction on finished products being imported into India, but has an impact on raw material and machinery that enable the production of various Make in India initiatives, and – very significantly – employment in India.

With inflamed passions, one seeks easy answers. We’re no strangers to demonisation and othering, and the Chinese ‘boycott’ is just that. Irrational, untenable, hypocritical, and ultimately, counter-productive. If you’re still incensed enough to throw that LCD TV out your first-floor balcony, make sure you follow-through and throw out almost everything else as well. Because you’re almost guaranteed to find a “Made in China” sticker on whatever you touch.