Intel has been a dominant leader in the CPU market for decades with only AMD giving them some sporadic competition over the years (though AMD completely turned things around a couple of years ago). The graphics card market was dominated by NVIDIA and AMD until the latter went into a deep slumber for a few years. The CPU space has also been getting quite dull (How many more cores can you add?) and computing is increasingly shifting to the much faster, more capable GPUs, hardware that's primarily been used for gaming.

Intel's been trying to crack the space for several years now and hasn't really succeeded. Last year, Intel announced yet another attempt at making GPUs, but this time, stole someone from rival AMD, making it quite clear that Intel's actually serious this time. Dubbed as 'Intel Xe', presentation slides and teaser footage are all that are available on the new platform. The latest information comes from Intel's ‘Xe Unleashed’ event that was organised internally. It was presented by Raja Koduri who heads the graphics technology division at Intel — after being poached from AMD. GPUs or graphics cards have traditionally been these monstrous, monolithic chips. Intel has opted for a slightly different, but not entirely new approach of combining multiple graphics chips on one card.

If you’re wondering what the ‘e’ stands for in ‘Xe’, it’s the number of GPUs in their new architectural philosophy. So, ‘X2’ will be dual-GPU, ‘X4’ will quad-GPU, ‘X6’ will be a hexa-GPU setup and so on. This multi-GPU approach is called an MCM package (Multi-Chip-Module) that integrates multiple GPUs, memory and controller chips on a single card. Do note that this is completely different from using two different graphics cards connected on one system. Intel is planning to launch multi-GPU cards with the help of their new architecture along with a new software layer (OneAPI) that will allow seamless scaling of the GPU. All the multi-GPUs will register as a single large GPU to offer higher performance. While AMD and NVIDIA do have plans to develop multi-GPU cards in the future (they don't currently offer such cards), Intel is going to take a bit of a lead here, assuming the card is actually released as described.

Here are the specs that were teased at the event:

The leak comes from Wccftech. The specs look insane, especially the number of combined stream processors, bandwidth, and the use of three 8-pin power connectors. In comparison, NVIDIA's flagship GeForce RTX 2080 Ti has 4,352 stream processors (or what they call CUDA cores) whereas the AMD Radeon VII has 3,840 stream processors, and neither requires more than two 8-pin power connectors. A single GPU on the Intel Xe architecture has 6,144 stream processors and on the Intel Xe 2 GPU, it's double the number. Essentially, this number will only scale up as the number of GPUs are increased. The RTX 2080 Ti has a bandwidth of 616 GB/s whereas the Radeon VII has 1 TB/s. In comparison, the Xe 2 has a claimed bandwidth of 8 TB/s, which is again insane. How Intel is achieving this is still something of a mystery. 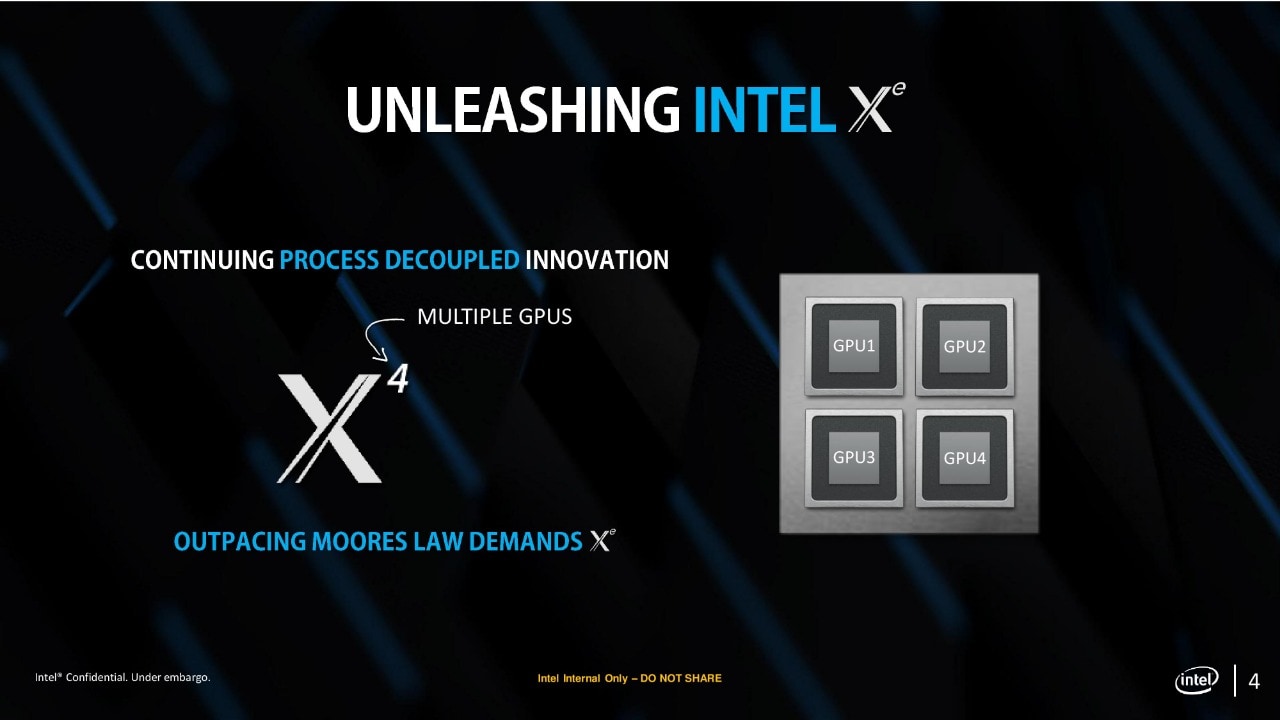 Apart from the slides, footage was also shown at the event that teased a first look at what the graphics card is going to look like.

The card will apparently operate in two modes including a standard and turbo boost mode where the latter can reach up to clock speeds of 2.7 GHz with an upgrade to, say, a liquid cooling unit. And yes, you read that right, it appears that the card will, potentially, support liquid cooling right from the start. ASUS is said to be working with Intel to make the first reference design.

The new approach will allow Intel to scale between the number of GPUs and will result in an exponential rise in discrete GPU performance through the years. We will probably be seeing the first batch of X2 GPUs in 2020 with a tentative launch date of 31 June. And the following years will see the launch of the next batch of GPUs including X4, X6 and X8 until 2023. Intel is said to be going for competitive pricing, so it should be priced at around $699 for the X2 card, which is in the same league as NVIDIA's top cards.

Performance aside, one of the reasons for NVIDIA's success has been its unmatched feature set. Hopefully, Intel's card, at launch, will maintain feature parity with its rivals.