Santiago, CHILE: Hosts Chile will kick off the 44th edition of the Copa America on Thursday aiming to end one of the longest-running and most embarrassing records in South American football.

In 36 attempts spanning 99 years, Chile have never won the continent’s top competition. They have finished runners-up four times and in third place on a further five occasions. 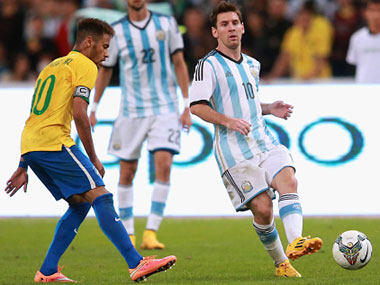 Treble winners at Barca could face off in the Semis of Copa America, kicking off in Chile on June 11. Getty Images

It is a statistic that rankles with Chileans. Even Bolivia, Colombia, Paraguay and Peru -- hardly footballing powerhouses -- have at least one Copa trophy to their name.

“It’s a big challenge for us all,” captain and goalkeeper Claudio Bravo said on Tuesday ahead of their opener against Ecuador in Santiago’s national stadium.

“But in the Copa America, the real pressure is on the teams that have lifted the trophy most often.”

Those teams include Brazil and Argentina, who will start the three-week tournament as favourites.

Dunga’s Brazil have won their last nine matches and will make it 10 if they beat Honduras in Porto Alegre on Wednesday in their final warm-up game before they head to Chile.

They have conceded just two goals in those games and beaten Argentina, Chile, Colombia and France. Although all friendlies, the results have gone some way to erasing the traumatic memory of their 7-1 humiliation by Germany at last year’s World Cup.

Neymar will spearhead Brazil’s attack after helping Barcelona win the treble and, although left back Marcelo and midfielder Luiz Gustavo have withdrawn through injury, they boast a formidable squad anchored by Paris Saint Germain team mates David Luiz and Thiago Silva.

The Brazilians open their campaign against Peru in the southern city of Temuco on Sunday before moving north to Santiago for a mouth-watering clash with Colombia -- a repeat of last year’s stormy World Cup quarter-final.

If the groups turn out as expected, Brazil will face Lionel Messi’s Argentina in the semi-finals.

The Argentines are seeking their first major title since they won the Copa America 22 years ago, having lost last year’s World Cup final to Germany and the 2004 and 2007 Copa finals to Brazil.

At the last Copa in 2011, they were beaten on home soil by eventual champions Uruguay in the quarter-finals in a penalty shootout -- a huge disappointment for a team that have won the competition 14 times.

The River Plate neighbours will meet again in Chile in a relatively tough Group B that also includes 2011’s beaten finalists Paraguay.

Messi is the undisputed star of the Argentine show but Gerardo Martino’s squad is packed with talent from front to back, with Pablo Zabaleta in defence, Javier Mascherano in midfield and Sergio Aguero and Carlos Tevez up front.

Uruguay and Colombia are the other sides with an outside shot at the title, although the Uruguayans look a shadow of the team that lifted their record 15th Copa title in Buenos Aires four years ago.

With Diego Forlan retired and Luis Suarez still serving a ban for his infamous World Cup bite, they will rely heavily on French-based strikers Edinson Cavani and youngster Diego Rolan.

The Colombians will look to Manchester United’s out-of-sorts Radamel Falcao, who missed last year’s World Cup through injury, and Real Madrid’s James Rodriguez, who made such an impact at that tournament, to spearhead their campaign.

The Copa features 10 South American teams plus two guest sides from North America and the Caribbean -- this time Mexico and Jamaica. The top two in the three groups qualify for the knockout stages along with the two best third-placed teams.

The tournament will be staged in eight Chilean cities, from Temuco in the lush, green south to Antofagasta in the bone-dry Atacama desert. The final will be played in Santiago on July 4.