Borussia Dortmund midfielder Axel Witsel has undergone an operation after suffering a facial injury at home and has been ruled out of action until next year, manager Lucien Favre has said.

The 30-year-old Belgium international was hospitalised after falling at home, Favre told reporters ahead of Dortmund’s Champions League clash against Slavia Prague later on Tuesday. 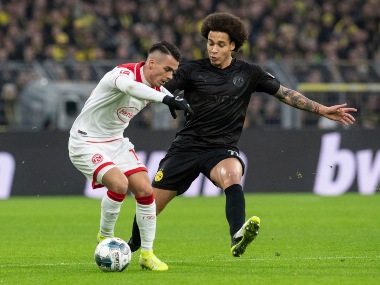 Axel Witsel (R) has made 18 appearances in the Champions League and Bundesliga this season, scoring three goals. AP

“He won’t be able to play for the rest of the year ... It’s a shame for him and us, he’s an important player. Hopefully he is back as soon as possible,” he said.

Dortmund said in a statement on their website here that the operation was a success and Witsel had returned home to recover.

Witsel has made 18 appearances in the Champions League and Bundesliga this season, scoring three goals.