Uttarakhand Election 2017: It's Congress versus BJP in most seats

Dehradun: With 51 candidates withdrawing from the fray on the last day for withdrawal of nominations, the chessboard for the 15 February Assembly polls in Uttarakhand is laid out where the ruling Congress and opposition BJP appear to be locked in a straight contest in a majority of total 70 seats. Congress and BJP, the two poles between whom power has oscillated since the state's creation in 2000, are once again poised to take on each other in a straight fight in most seats with a couple of exceptions like Haridwar and Udhamsingh Nagar districts where the BSP could be the third player. 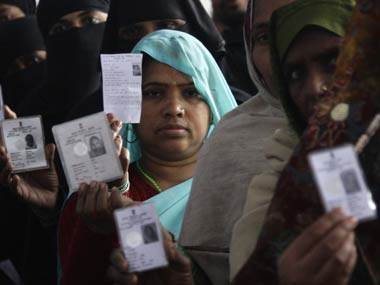 Miffed over denial of tickets by their respective parties quite a few strong leaders from both sides have also thrown their hats into the ring as independents making the contest interesting in nearly 18 seats. While eleven former Congress MLAs are in the fray this time battling as BJP nominees, Congress has also fielded three former BJP MLAs. Three former BJP MLAs are also contesting as independents.

Both parties which enjoy statewide support base have fielded candidates from all 70 seats. However, Congress has decided to back independent candidate Pritam Singh Panwar from Dhanaulti after fielding Manmohan Mall as the party's official nominee from the seat where he continues to be in the fray. This is the state's fourth assembly elections and in the last three elections power has changed hands between the two parties alternately.

Hence, this time again Congress and BJP look like the two major contenders for power. However, in 20 seats located in Haridwar and Udhamsingh Nagar districts BSP can make the contest triangular by dint of a strong support base. Assembly polls in Uttarakhand this time are also different as rebel challengers in large numbers from both sides are also in the fray as independents refusing to withdraw despite a lot of coaxing and cajoling by their respective leaderships.

BJP has expelled 18 rebels for six years after they refused to withdraw in favour of party's official nominees, while the number of Congress rebels expelled by the party for
defiance is 24. The presence of rebel candidates in the fray may make the fight in at least one and a half dozen seats interesting as they have the potential to become part of the main contest or dent the votes of the party they have broken with and influence the results.

A total of 12 sitting MLAs who had won on a Congress ticket in 2012 assembly polls joined BJP since start of the political crisis in Uttarakhand in March last year till after
election notification in the state. Almost all of these have been fielded by BJP except Vijay Bahuguna whose son Saurabh has been fielded from his father's seat Sitarganj.
People will definitely watch out for what happens in these seats as well as Haridwar rural and Kichcha Beng contested by Chief Minister Harish Rawat.