Stalin likely to use 'Karunanidhi card' to surge ahead in 2019: Raking up burial row to tackle both AIADMK, Alagiri

In a strange way, the narrative of the DMK meet to condole the demise of M Karunanidhi was set by Rajinikanth. The actor-turned-politician, who by no stretch of imagination is associated with the DMK, tore into Edappadi Palaniswami for his lack of grace by absenting himself from Karunanidhi's burial at the Marina. Rajinikanth was speaking at a condolence meet organised by the Tamil film industry on Monday.

"All of India came here for Kalaignar (Karunanidhi). The soldiers from the three forces paid respects to him, they gave him the 21-gun salute. But I have an issue. From the Governor to the chief ministers of all states, from the Prime Minister to Rahul Gandhi, when they all stayed for at least two to three hours, shouldn't Tamil Nadu's Chief Minister have come there? Shouldn't he have stayed there? Shouldn't the Cabinet have stayed there?'' asked Rajinikanth, in what was his most blistering attack on the AIADMK so far.

The superstar did not stop there. He alluded to the AIADMK government's decision not to give land for Karunanidhi's burial next to CN Annadurai's samadhi at the Marina. The DMK subsequently went to the Madras High court which turned down the government's objections.

"You gave a resting place to him (at the Marina) and did not go in for an appeal (of the Madras High court order to the Supreme court). If you had chosen to appeal, I would have come down to protest,'' said Rajinikanth. 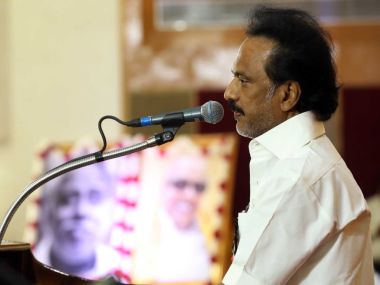 MK Stalin was among those listening to Rajinikanth, seated in the front row. On Tuesday morning, Stalin took off from where Rajini left and decided to tell the world about how the EPS regime went out of its way to put hurdles in fulfilling Karunanidhi's last wish.

"When the doctors told us that only a few hours were left for Kalaignar, we approached the chief minister. I held his hands and requested him for space at the Marina. Palaniswami said legal opinion was against it. When I told him the legal wing of the government will do what the political heads decide, the chief minister in order to make us leave his residence, said he will consider. The next morning when a team of senior DMK leaders went to meet him, they returned to tell me that the chief minister had refused to allot space at the Marina,'' revealed Stalin.

It was obvious that Stalin, looking grief-stricken in a rare unshaven look, was looking to target two birds with one stone. Both the political rival and the family rival. The DMK condolence meeting was a show of strength, with several speakers going on to say that anointment of Stalin as the next president of the party was a mere formality. The messaging was intended for Stalin's elder brother, MK Alagiri, who on Monday had declared that Karunanidhi's "true and loyal followers" are with him.

The sibling rivalry had come to the fore less than a week since Karunanidhi's demise. If the posters that have appeared in Madurai are an indication, Alagiri plans to start a political party called 'Kalaignar DMK'. It will be his attempt to ensure that post-Karunanidhi, the debate over who the rising son will be in the party of the rising son, has not been settled.

By speaking at length about his efforts to ensure Karunanidhi's wish was fulfilled, Stalin was trying to position himself as his father's favorite and obedient son. ``I would have died had Kalaignar not been buried at the Marina'' was Stalin's emotional pitch. The banner photograph in the background also reinforced the political succession plan. It had Periyar, Annadurai, Karunanidhi and Stalin's pictures.

By choosing the condolence meeting to criticise the AIADMK, Stalin was making it clear that the DMK would use the Marina episode to attack the ruling party. All through the Karunanidhi-Jayalalithaa era, the equation was marred by lack of political civility. Things seemed to change a bit when Karunanidhi's family visited Jayalalithaa at Apollo Hospital. But Palaniswami's stand on the Marina is an attempt to employ the Jayalalithaa template while dealing with the DMK.

At the film industry meeting, Rajinikanth in an emotional tone said he could not handle it when Stalin broke down like a child. "Thalapathy (Stalin), don't worry. Your family is there with you,'' said Rajini. That it came within hours of Alagiri claiming that Rajinikanth and he could work together, was significant. The actor was pointing out that Alagiri's pronouncements notwithstanding, he stood with Stalin at a personal level.

The blot on Stalin's CV as the leading light of the DMK is his inability to get the party back to power in 2016 and make Karunanidhi chief minister for a sixth time. He was criticised over the past one and a half years for his failure to take advantage of the fissures within the AIADMK. What Tuesday showed was a Stalin determined to use the father card to do well in 2019.