Turning the heat on the Nitish Kumar-led Bihar government, Tejashwi Yadav of the Rashtriya Janata Dal (RJD) made some serious allegations against the Bihar chief minister at a sit-in protest he had called in New Delhi's Jantar Mantar on Saturday. The meet was organised to protest against the Muzaffarpur shelter home rape case, where around 40 inmates of the centre were allegedly sexually abused and harassed repeatedly over a period of two years.

Alleging that sushasan babu (Nitish Kumar) had turned Bihar into a rakshas raaj (monster rule), Tejashwi said the Bihar chief minister was protecting the key accused in the case. He accused Nitish of having Brijesh Thakur's name removed from the FIR filed in the case as the latter shared a good personal rapport with him. The RJD leader also claimed that the chief minister had delayed action in the case despite repeated red flags because Thakur — the prime accused in the case and a local strongman — had strong ties with the ruling Janata Dal (United) (JDU). 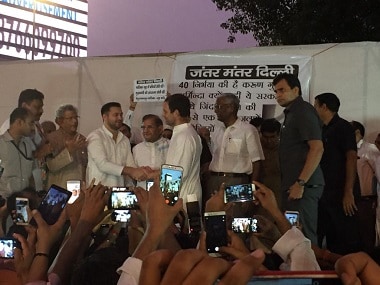 Rahul and Kejriwal also spoke at the event, each expressing shock at the horrendous details of the crime. They also called for a speedy investigation and trial in the case, while fixing responsibility with those who kept the matter hushed up.

Tejashwi used the opportunity to mount a scathing attack on Nitish, claiming that his government had failed to prevent a grievous crime intentionally as it wanted to shield the accused.

Tejashwi said that for months, the Bihar government ignored reports submitted by various NGOs that flagged suspicious activities at the Muzaffarpur shelter home. Accusing Nitish of having the name of the key accused removed from FIRs, the RJD leader also questioned the chief minister's prolonged silence on the matter.

Nitish had reacted to the incident on Friday, saying that he was ashamed of the crime, and that the guilty will not be spared. However, the matter came to light nearly two months ago, when a report by Tata Institute of Social Sciences uncovered that the inmates, including minor girls, were sedated and sexually assaulted frequently. Tejashwi's party, the Congress and the Hindustani Awam Morcha — a splinter group of the JD(U) — had taken up the matter in the Bihar Assembly several times.

At the protest in Delhi on Saturday, Tejashwi said it was after repeated attacks from the Opposition and constant media glare that Nitish finally reacted. "I told you I will force you to break your silence, and I did)," he said.

Tejashwi also made a jibe against Nitish, who had cut ties with the RJD last year, claiming that the alliance weighed heavily on his conscience. On Saturday, Tejashwi said that the Bihar chief minister's conscience was rather late in waking up this time. "We have come to Delhi because my chacha’s (Nitish Kumar) soul has not woken up yet to these crimes. He says there is a rule of law in Biharit. It is not 'jungle raj', but ‘rakshas raj," he said.

He also claimed that one of the older victims, who was capable of giving a detailed account of the crimes at the Muzaffarpur shelter home, has been sent to another shelter home, and there has been no information on her whereabouts since then. "Since the identity of the girls is protected, who knows, the victims may be swapped to protect the victims," he alleged.

The event turned into a platform to showcase Opposition unity as several leaders from non-NDA parties, who have yet to take a call on alliance partners in future polls, were present at the Jantar Mantar event. RJD leaders and workers, along with several other Opposition leaders, gathered at the Delhi protest site in huge numbers. Apart from Rahul and Kejriwal, those present included Samajwadi Party leader Ghanshyam Tiwari, Tejashwi's sister Misa Bharati, JD(U)'s rebel leader and former party supremo Sharad Yadav, AAP's Somnath Bharti and Sanjay Jha, Trinamool Congress leaders Dinesh Trivedi and the Communist Party of India's D Raja.

The Opposition leaders tried to drive home the message that the protest was the civil society's reaction to the "shameful incident" and not a political movement.

Speaking to reporters from the venue, RJD MP Manoj Jha said they had made the conscious decision not to use any political party's flag to ensure that the issue is not politicised. The party leaders were also seen requesting the crowd to not raise slogans against any particular person or party.

However, when Rahul took the stage, he used the occasion to refer to the Opposition unity and claimed that the BJP-RSS ideology was sidelined. "The RSS is one side and the entire Opposition is on the other side. India will not tolerate this kind of attack on hits culture, history and institutions," he said. "You see how the Opposition stands united here. India stands united while the BJP and RSS stand on the other side. It will be more visible very soon. India is saying that whatever happened in the past four years was not good... There were attacks on Indian culture. But when Indians make up their mind, no one stands a chance against them." Tejashwi made a strong pledge for Nitish to quit, saying that while he had been prompt in the past to show off his righteousness, this crime had truly left him no right to remain in his post. RJD's Manoj Jha said his party demanded three things through the protests — Nitish's resignation as the chief minister of Bihar, a Supreme Court-monitored inquiry by the Central Bureau of Investigation and a prompt trial and justice.

"Enough is enough Nitish ji.. you don't have any moral right to remain in your post. Quit and quit now," Manoj Jha said.

Kejriwal, too, weighed in and resonated similar sentiments, but he did not explicitly seek a resignation. He pointed out that it was the case of the Delhi gangrape in December 2012 and the protests that followed that put the UPA government out of power. "Here, 40 small girls were harassed for years. We should be ashamed of ourselves, and the responsibility should be fixed with those whose oversight led to the crime staying undetected," he added.

AAP's Sanjay Jha also said Nitish should quit from his post on moral grounds. Referring to a previous episode where Nitish had resigned as the Union railway minister after a deadly train accident in 1999, he also asked that why the JD(U) chief was not displaying similar righteousness this time.

Rahul, meanwhile, latched on to Nitish's recent reaction and said: "Nitish Kumar said he is ashamed of what happened in Muzaffarpur. If you are truly ashamed, then you should act now against the culprits and ensure speedy justice for the girls."