Critique in caricature: Is political cartooning a dying art, or is there hope for its future?

In India, a cartoonist was jailed on charges of sedition and his website was taken down. The cartoon at the eye of the controversy was in support of Anna Hazare’s ‘India Against Corruption’ movement and depicted the heads of three wolves on the national emblem, instead of the lions, and the caption punned on the national motto: 'Bhrashtamev Jayate' (the corrupt alone will triumph) it read. The cartoonist was Aseem Trivedi, who has since launched an online campaign to fight for freedom of speech, and calls himself a human rights defender.

The Syrian Electronic Army — a group of pro-regime cyberwarrriors — hacked into the Twitter account of Thompson Reuters and pushed out a series of explicit political cartoons scathingly critical of the United States and its role in the Syrian civil war, the Syrian rebels, Turkey and Libya.

Whether the tweets were a pro-establishment slander campaign, or an alternative narrative to the western media, that is not the point here. What binds these examples from different time frames and geographies is that they highlight the attempt to skewer politicos with a single-panel drawing and barely any words.

Packed with a generous serving of satire and humour, without being directly critical, cartoons give a lot to the reader, in a very little space. It’s a potpourri of journalistic acuity, brevity and artistic singularity all served in a size smaller than a postcard.

If journalism is the first draft of history, political cartoons are the footnotes that bring it in perspective. It is curious how the politicians are often more enraged over harmless mockery than the caustic criticism dished out in opinion pieces.

That is the nature of cartooning: it sides with no one, it spares no one. The deadpan humour will mock anyone and everyone, and if anything, it will be a little more highhanded in criticising the ruling dispensation. When the cacophony of political discourse draws close to futility, which it often does, it serves as fodder to a cartoonist’s creativity.

Unfortunately, amid a generation growing up on a diet of memes and gifs, staff cuts and dwindling freelance budgets have further pushed the art form into a tight spot.

Factor in the waning freedom of press, and one realises that cartooning is facing an uneven decline.

Trivedi, for one, shows little optimism where the future of editorial cartoons is concerned.

This is how he defines the current state: “Indian cartooning was always very polite in nature. And now, more than ever, dark satire has eroded to the brink of nonexistence.”

Speaking to Firstpost, he points out the lack of appetite amid readers for a mockery of the majority sentiment, blaming it on the  the rise of internet for the phenomenon. Trivedi cautions against being overenthusiastic over the internet phenomenon that brought tea-stall debates in the public domain.

“Internet is a democratic space and manifests the same pitfalls as a democracy in a much larger way. The majority has taken over the social media space and it is almost impossible to sustain a non-mainstream debate. If anything, the internet has widened the gap between the majority and minority voice,” he says.

What he says, is reminiscent of another parallel debate that accuses the majority political forces of running and financing an army of trolls to mock and discredit the dissenting voices. A cartoon by Aseem Trivedi reproduced from Cartoon Against Corruption

Editors were used to thwarting pressure from political forces to whatever extent it was possible, but they are stunned by the new phenomena where the pressure is from the readers. As the average reader now has a voice, it threatens to tear down a publication’s reputation if they don’t like what you have got to say, which should be a good thing. Nonetheless, it kills the minority voice.

Trivedi also holds the fraternity of cartoonists equally responsible for blunting the satirical edge of cartoons and bowing down to the pressure from the government. He says that the internet phenomenon has already started influencing the motives of cartoonists, who know what sort of content will fetch them instant fame and followers or what will trigger a backlash.

“Who would want to play an adversarial role anymore when those in power are branding us presstitutes?” he asks.

Dinesh Singh, Founder of Navarasa Duende, an organisation working to revive the craft, offers more optimism. “Editorial cartoons are irreplaceable. They are a power-packed, intelligent commentary on the political discourse,” he says.

He, however, laments the current state of the art form and says that apart from the lack of editorial freedom that the press once enjoyed, the media too is to be blamed for it. “A major section of media has lost the editorial will to take the tiger by its tail. There is no dearth of talent but newspapers are not ready to publish anything even remotely controversial.”

He points out how most newspapers have dropped the post of an in-house chief cartoonist and the trend to host a pocket cartoon on the front page is long lost. “There was a time when the front page cartoon would set the editorial tone and tenor of a publication, now commercial interests take precedence.”

His company has launched an initiative, The Pocket Punch Brotherhood, to promote the craft globally by organising competitions, exhibitions, forums etc to take the art form to the readers as well as the establishments.

Singh says that the freedom of an editor is now infringed upon by a managing editor. ‘It’s not worth the risk anymore’, is the supreme argument to water down strong cartoons. Singh believes the key lies in stirring enough interest around it to make it worth the risk

“In any democracy it is a question of creating a voice. We are not an isolated country so if you create a strong enough voice I think it can be revived. That’s a small way we can enrich that support system,” Singh adds.

Triambak Sharma, the founder and editor of Cartoon Watch, which he claims is the only longest running cartoon magazine in India, says the art can sustain as long as cartoonists know “where to draw the line.”

Criticising the “likes of Aseem Trivedi” who he feels believe in “instant rise to fame just by picking controversies,” Sharma says that maintaining the dignity of a discourse is important.

He feels that humour is the primary ingredient of a cartoon and it must never come at the cost of hurting anyone’s sentiment. “Below the belt humour is creating problems and giving the sense that there isn’t enough press freedom. A cartoonist should be ready to speak against anyone, even himself, but with a certain amount of dignity,” he says. He feels that coming up with something fiery and hard-hitting is easy; the tougher part of the job is to refine it to a tonality that drives the point without upsetting the sensibilities of a reader.

However, on the question of below the belt humour, Singh and Trivedi differ in opinion from Sharma.

Singh strongly believes that a cartoonist, as the rest of the media, must play an adversarial role to the majority political voice. He feels that the cartoonist is well within his limits as long as authorities the butt of the joke. Targeting the faith and sensibilities of readers, he feels makes for an unpalatable joke. But he does not stand for outlawing them. “The term cartoon in itself comes with a rider that look I’m not saying the truth, I’m exaggerating it for the sake of humour. You buy it till the time you can enjoy it, if you can’t then best forget it and move on, that should be the spirit,” he says.

Singh chortles, when asked that, in times like these, when the politics is wedded with “faith of the majority”, how does he suggests the cartoonists criticise those in power without upsetting the readers.

“Religious majority is not the same as the spirit of democratic majority. That should be the spirit of cartooning,” is all he says.

Singh and Sharma’s words of caution on not hurting the reader’s sentiment also pose another pertinent question. What of the voices of those minorities, whose interests, or perceptions are untethered with the majority sentiment. Take for instance, Kashmir, where a different side of the narrative exists and it must be told, no matter what the majority wants to hear.

Firstpost, asked this question to Suhail Naqshbandi, a prominent cartoonist from the Valley who works with Greater Kashmir. Suhail, in a guarded response, although concedes that the censorship has increased in recent times, but adds that the challenge in working around the limitations “is interesting.” A cartoon by Suhail Naqshbandi for Greater Kashmir

“I personally feel that the side of the underdog or the victim must come across in the narrative. But there are always two ways of saying something. Either you can tell it in a in-your-face manner, or if you feel it can invite a controversy, you can take a detour and tell things differently,” Suhail says. Suhail's cartoons, poignantly portraying the pain of Kashmiris, only complement his subtle yet nuanced response. 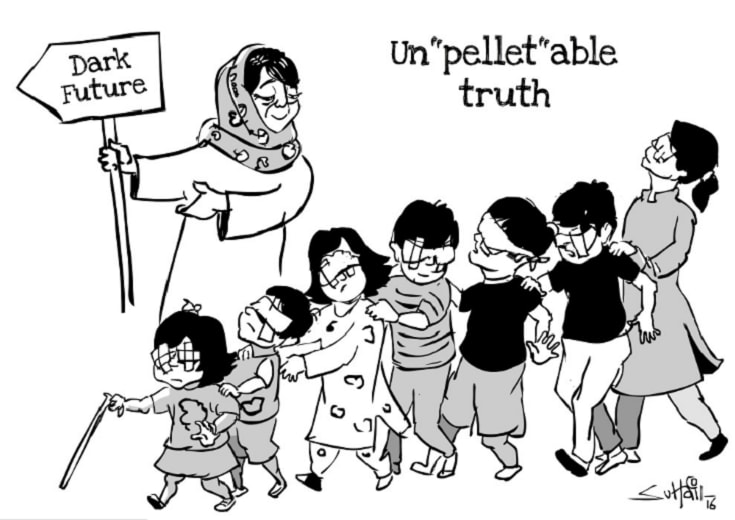 On the question of increased censorship, he has a very pragmatic response. “It’s all a process of adaptation. It makes the job a little harder but no matter what, the show must go on.”